To begin with, Binns has a very long and colourful history with its roots in Sunderland. In fact, the Binns department store in Fawcett Street, Sunderland was the second largest ‘shop’ in the UK. Harrods in London having the number one spot, of course. Indeed, Binns had the title ‘Harrods of Sunderland’. So, here we shall have a look into this Wearside Wonder. 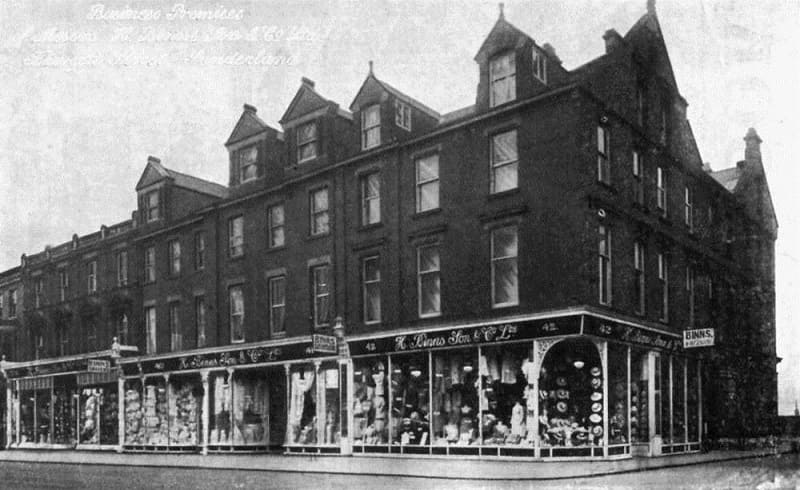 In the first place, George Binns came to Sunderland from Yorkshire in 1804. George, together with his son Henry, opened a drapery store in 1807. Then, soon after, they took over a larger drapery store at 176, High Street, Sunderland. At this point, its worth noting that George Binns was a member of the anti-slavery movement. With this in mind, the goods they sold had to be cotton coming from free labour only.

After his fathers death in 1836, Henry then took over the business, lock, stock and barrel. Furthermore, he changed the name of the store to Henry Binns. Then, in 1844 moved the business to 173, High Street.

Henry went into retirement in 1865 and as a result, his son, Joseph John Binns, took control of the business. The business name was then changed to H Binns, Son & Co.

At this point, we need to recognise that as Sunderland began to grow and so did the town centre. As a matter of fact, as Sunderland developed, the commercial centre began to move westward. Obviously, as trade moved westward, Binns had to keep up with the trend. So, in 1884, the business began renting two houses in Fawcett Street, number 38 and 39. Of course, the frontage of those houses became the new shop front and remodelling of the interior took place.

Not only was the business on the rise, but by the turn of the century, the store was employing 30 staff. Over the next twenty years, the company would purchase almost all of the rest of the block for further expansion. Indeed, the floor space would total almost two acres and employ almost 400 staff.

By 1920, Binns opened stores throughout the North of England as well as Scotland. Moreover, Binns began to expand their Sunderland store. Indeed, in 1921, the company had their business concerns on both sides of Fawcett Street. Furthermore, the goods on offer were becoming more varied as the expansion continued.

Obviously, the company needed a slogan for advertising. A simple but effective slogan come about and was to last until the stores’ demise. So, by 1924 ‘Shop at Binns’, which the company, adopted became the company standard. 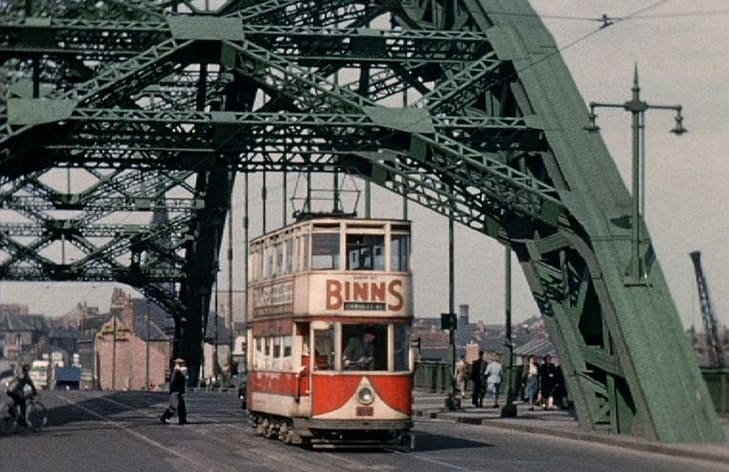 Indeed, it became a familiar sight on the Sunderland Corporation tram and bus fleets.

In 1928, extensions to the store on Fawcett Street took place again. However, this was their second acquisition which took up part of John Street and Borough Road. With this in mind, the Sunderland store was diversifying even more.

In the Second World War, Sunderland became a bombing target for Germany due to the heavy industry here. Furthermore, in April 1941, a German air raid saw the Binns store hit by enemy incendiary bombs. In fact, the South West end of Fawcett Street, where Binns original building was, became a burning inferno. Obviously, the whole area became very dangerous with all the windows shattering. 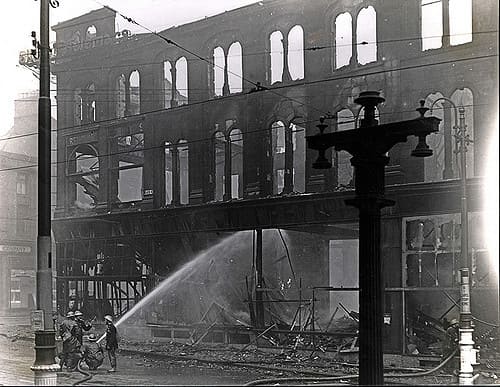 Controlling the fire at Binns, Sunderland

After the war, rebuilding took place of course. Indeed, rebuilding of a new four story building began in November 1949 on the old site. So, by March 1953, Binns in Sunderland opened their new showcase building. However, one month later the The House of Fraser secured a majority shareholding in the company.

Further expansion began again on the opposite side of the road in 1958. This was also a four story building and its completion was in 1962. When it opened, its feature was a spiral staircase leading up to the restaurants and furniture department. 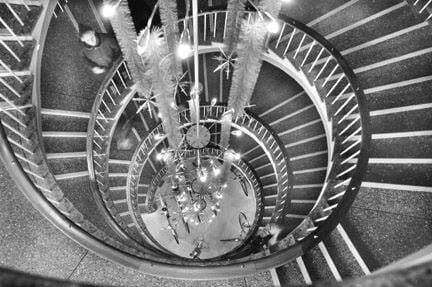 It also included an underground subway which linked both sides of Binns together. So, shoppers could visit all departments without having to cross a busy road. In essence, the subway was the only one of its type in North East England and cost around £15,000. Because of the combined size of the buildings, it became the second biggest department store in the UK.

Further refurbishments took place over the years to both sides of Binns Department Store. However, due to a decline of customers, the company’s profits were suffering. Of course, the Sunderland store had to streamline its business. So, in April 1989, the store closed the east building, opposite the Sunderland Museum. However, this was not enough to save the store. Therefore, in January 1993, Binns Department Store in Sunderland closed its doors for good. The 140 workforce then had to look for other employment.

Conversions to the old Binns store on the east side of Fawcett Street took place later. In fact, the site has new occupants. Firstly, there is the Willian Jameson Pub on the corner. Secondly, the Sunderland Central Library and Art Gallery took over the other part of the old building. 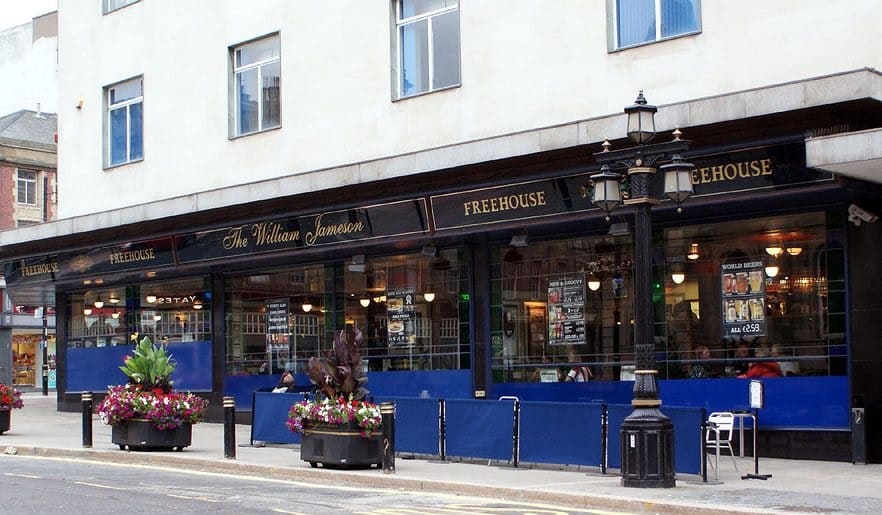 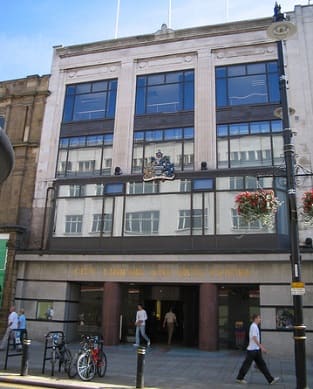 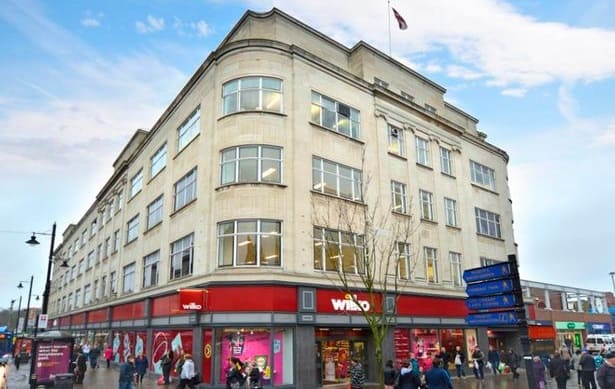 The old building on the west side of Fawcett Street is now occupied by Wilkinsons, another department store.

Finally, Sunderland had another equally famous department store, of course. Joplings was its name and we have the history of that store here.