To begin with, Bishopwearmouth is an area in Sunderland, North East England, covering around 20 square miles. Of course, this encompasses settlements such as Ryhope, Silksworth and the original Sunderland. In fact, this was one of the three areas that merged together to form the beginning of modern Sunderland. Obviously, the other two settlements were the old Sunderland and Monkwearmouth on the north side of the river. Indeed, the Wearmouth Bridge (1796) connects both areas nowadays.

Bishopwearmouth, on the south side of the River Wear, in essence became a parish around the 12th century. However, the settlement dates back to the year AD930. It was then that the Bishop of Durham gained land by the way of a grant off Athelstan. Indeed, Athelstan was King of England from 924 to 927.

In order to understand things better, Sunderland was a small fishing port at the mouth of the River Wear. However, over the centuries, Sunderland grew in size and importance. In fact, Sunderland became a parish independent from Bishopwearmouth in 1719.

The church of Bishopwearmouth is indeed St Michael’s Church which has become the Sunderland Minster in 1998. In fact, the official name is now, The Minster Church of St Michael and All Angels and St Benedict Biscop. Of course, it stands today near the urban city centre. Since Sunderland is a city now, many people believed that the Minster became a contender to become a cathedral.

However, there can only be one cathedral in a diocese. Sunderland is in the Durham Diocese, so Durham Cathedral is Sunderland’s cathedral. Therefore, the City of Sunderland has a cathedral which is one of the wonders of the modern world! 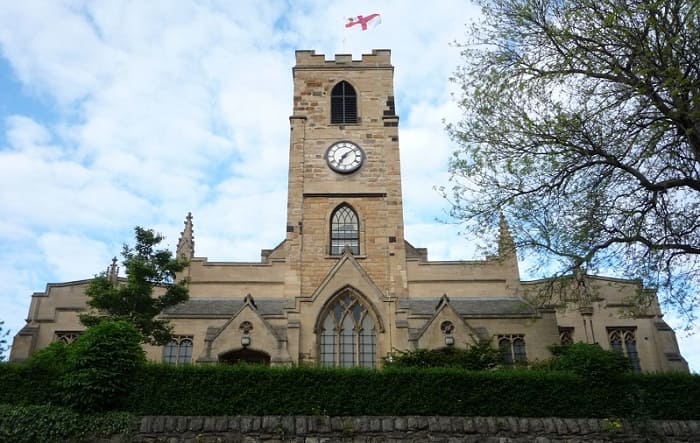 St Michael’s Church burial arrangements meant that some overcrowding occurred in the cemetery. Indeed, some dead lay beneath the church floors. So, due to health concerns, it became necessary to develop Bishopwearmouth Cemetery in the 1850’s. Because of this development, some memorials moved to Bishopwearmouth Cemetery as well. Indeed, it meant that some interesting source of local history followed from many parts of the town too.

One such memorial that transferred over to Bishopwearmouth Cemetery was indeed the Victoria Hall Memorial. This memorial still exists today. Obviously, it is a white marble statue which depicts a grieving mother holding her dead child. Nowadays of course, the Victoria Hall Disaster Memorial, stands in Mowbray Park, close to the original disaster. As a matter of fact, it originally stood in Mowbray Park. But, after it’s removal to the cemetery, it was subject to vandalism and forgotten about. So, well done to the council leaders who sanctioned its restoration at a cost of £63,000.

Bishopwearmouth Christ Church in Ashbrooke, Sunderland, became redundant in February 1998. However, after its sale, it became a Sikh temple.