This is the story of the family behind Blacklock jewellers in Sunderland.

Robert Blacklock was working on the Tyne as a shipwright when he decided to open his first shop. This was indeed a jewellers and pawnbrokers at Bedford Street, Sunderland in 1832. In fact, not long after opening his shop, Robert’s son William joined the now flourishing business.

As Sunderland was a busy shipping port with a growing shipbuilding industry Blacklocks soon became well known in the area. In the later part of the 19th century Roberts grandson, Ralph Hope Blacklock, also joined the family business. Indeed, the business continued to grow and flourish. Then, at the beginning of the 20th century, William Blacklock decided to move the business to Bridge Street. That was when Ralph Hope Blacklock took over the running of the business. 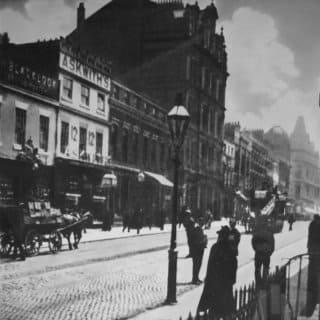 Ralph would continue to run Blacklocks Jewellers until the late 1920’s when he became ill. After the diagnosis, Ralph had to retire early due to tuberculosis. Indeed, he moved to Switzerland to recover. His son Kenneth who was still at school took over the business.

It was not until after the Second World War that Blacklocks started to specialise in high quality jewellery. However, in the 1960’s the retail trade in the Bridge Street area of the town began to decline. So in 1962, Kenneth moved the family business to Waterloo Place/Blandford Street corner. The move proved to be a great success.

As well as high quality jewellery, Blacklocks also had a back shop in Union Street. Indeed, this was in uses as a pawnbrokers and for selling second hand jewellery. By 1981, the Blacklocks had indeed opened a new shop in Durham.

In 1973 at an auction, a buyer for the company bought an Arab Ceremonial Dagger for £1,000. It had a gold handle together with precious gems built in. Indeed, the dagger was proudly on display in the shop window for £1250. But even with all the interest from press and public alike the dagger did not sell.

Deciding to get at least some of their money back, Blacklocks thought that melting it down might do just that. So, off it went to a firm who did this for them. Days later they received a cheque for £3000. No one had knew, but apparently the belt that came with the dagger was indeed 18ct gold wire. Obviously, this would have been a bargain should anyone have bought the item.

End Of An Era?

The last known owner, Ralph Blacklock, the great great grandson of Robert, first joined the business in 1966. Ralph was working as a gem dealer and studying gemmology. Obviously, competition became more fierce. So much so that Blacklocks Jewellers began to struggle. In effect, the Blacklock tradition came to an end in Sunderland at the end of 2002 when the shop closed. While another jewellers did take over the Waterloo Place premises, nothing was ever likely to replace the original shop.

So, what are your memories of one of Sunderland’s best jewellery shops? For example, did your engagement or wedding ring come from Blacklocks? Let us know here in the comments section below. Alternatively, start a thread off in the massive Sunderland Message Boards – the SMB Forum.

One Response to Blacklock Jewellers