To begin with, many accounts miss out the time when famous grave robbers, Burke And Hare, lived in Sunderland. So, to correct matters we give a short account of that time here. Indeed, the townsfolk may have been lucky in a way as we shall see. 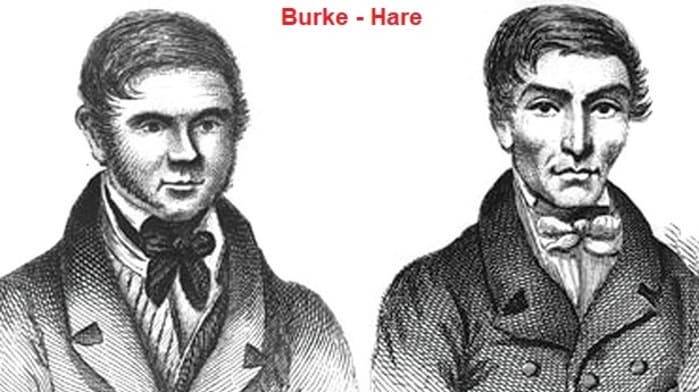 In the cold white winter of 1824, Sunderland heard the shouts of two men selling their hot food. One short and stocky called William Burke, the other tall and slim named William Hare. These two men, originally from Ireland, soon became famous body snatches. Indeed, Burke And Hare made large sums of money from the sale of corpses. Obviously they spread terror across England and Scotland in the 19th century after their crime evolved.

At the time, taking a corpse was not a crime because a dead body was not a ‘possession’. But, not only did they rob graves, they ended up murdering people as this was more convenient. There is a suggestion that Burke learnt his gruesome trade while the pair were living in Sunderland. Indeed, they were labouring on the construction of a new pier at south dock.

Sunderland Church, which later became Holy Trinity Church, was a particularly easy target for grave robbers. This was because it had nothing surrounding it but sea and open land. As the night wore on and the mist rolled in, it provided the perfect cover for these notorious thieves as they made off with the bodies. However, a decline in business in 1828 might be the reason why Burke and Hare moved from Sunderland to Edinburgh. Although the reasons for their move is unclear.

The pair moved into lodgings, where shortly afterwards one of the other lodgers died. Burke and Hare sold the body to some surgeons who were paying very good money for fresh bodies so they could learn their own trade. This gave the gruesome twosome their next deadly idea.

They would get people drunk then take them back to their lodgings and the suffocate them. While their bodies were still warm, they would sell them to the surgeons for a large some of money. They murdered 16 people before the police caught them.

To save himself, Hare turned King’s evidence so was immune from prosecution. Burke, on the other hand, was hanged in front of a large crowd at Edinburgh on 28th January 1829. William Burke’s skeleton is preserved at the Anatomical Museum of the Edinburgh Medical School. Indeed, they also have death masks preserved of both men.

Although Burke and Hare had left Sunderland, the grave robbing continued, but that’s another story. However, imagine if Burke And Hare remained in Sunderland. Would they have began murdering the locals here? What do you think? Leave a comment below or start a thread in the massive Sunderland Forum.

Wearside Online also invites you to send in any other local stories for publication. The process is easy, all you need do is fill in this form.

One Response to Burke And Hare