This is the SAFC Forum. You may chat about Sunderland AFC here together with any other footballing matters. Obviously, the Black Cats are the main focus. However, this is basically our football lounge.
Post Reply
11 posts 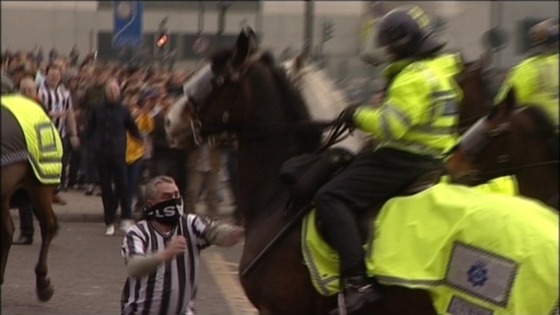 The Newcastle supporter who punched a horse in full view of the world's media has been jailed for 12 months. Barry Rogerson from Bedlington attacked a horse after his Newcastle team lost 3-0 at home to Sunderland and the Magpie supporters went on the rampage in Newcastle city centre.

Rogerson pleaded guilty to violent disorder and as well as being locked up he was banned from attending any football game for 6 years. Seven others who also joined in with the riot were also jailed.

This comes a few days before the Wear-Tyne derby - a very convenient message to send to the rival supporters.

* Newcastle supporters done similar rioting when they lost to Sunderland at home previously.

Rightly so.
Fancy taking it out on a horse

It was to set an example to potential football thugs and is out of proportion for that reason only.

No matter how much you hate the Mags or indeed animal cruelty, at the end of the day the horse was unharmed. It was his attitude that got him put in prison, that and the example that the judge set!

Compare the above to this below.

We have a man called Ryan Guntrip from Essex punch his pregnant girlfriend, Carina Mackay in the stomach a short while after the horse punching incident. Carina loses the baby which had died but the crown couldn't prove the punch killed the baby ... as if

There is something wrong with this country because this is all out of proportion .... by the way did I say the horse wouldn't have felt a thing and wasn't hurt in any way!

Checked the links and I think monty is spot on. Either the one who punched the pregnant girl gets a much higher sentence than the horse puncher or as much as I hate to say it the maggie horse puncher should have got far less.

I didn't see this thread before I replied to the other.
The horse punching Maggie will have served his time now.
Lets hope he doesn't come to Sunderland for the derby game in April.
We need the derby to pass without trouble and he is obviously a trouble maker.
If he can throw a punch at a defenceless horse, a defenceless child or disabled person would be shaking if they were confronted by him. We can all recall the shocking image of the incident with the horse. In fact anyone confronted by someone who was aggressive as that would be frightened!

It was shocking what he done to poor Bud the horse.
Didn't he say he was an animal lover as well?
I am sure he had a dog.

We all do things in the heat of the moment but it was the images of this bloke that will long live in everyone's memory. At the time he was looking for trouble and found it. I believe he will be just a canny bloke who got carried away at the time. He is canny old so I doubt he would do such a thing again. The hero on the day was Bud the horse.

Well, I think he is a wimp anyway and a poor excuse for a Newcastle supporter. He will have to live with those images for ever. I wouldn't be surprised if he gets a good clipping from time to time when he goes to the pub. Here is a picture of Bud the horse that was punched:

I never heard the RSPCA say anything about this shocking piece of cruelty by this Newcastle low life.

Anthony wrote:I never heard the RSPCA say anything about this shocking piece of cruelty by this Newcastle low life.

To be honest I don't think the RSPCA is any use at all if it still exists. I have never heard anything about them for years and I wouldn't even waste time googling to see if they are still around.

Barry Rogerson from Bedlington if you read this, why don't you come on here and explain yourself.
The Sunderland Forum is an animal friendly site so come and tell us what the score is.