In 16 June 1883, around 1,100 children attended the Victoria Hall in Sunderland to see a variety show, The Fays.
As the show ended there was an announcement that those with certain tickets would be allocated a prize upon leaving.

Not wanting to miss out there was a mass rush towards the staircase leading down to the exit. At the bottom of the stairs the doors were arranged in a way which would only allow one child through at a time. Those who got there first found themselves stuck and the sheer weight of those that followed killed them, mainly from compressive asphyxia. The poor kids basically couldn't breathe.

In total, 183 children between 3 and 14 years old, were killed making it the biggest disaster of this sort in the UK ever.

Queen Victoria sent messages of condolences to the families of the dead children.

There was a fund set up for donations and £5,000 was raised. This money was used for the kids' funerals and a memorial for Mowbray Park in Sunderland City Centre. Over time, the memorial which was of a grieving mother holding a dead child, became in need of attention. In 2002, the marble statue was restored at a cost of £63,000 and given an impressive glass and wooden framed protective cover complete with lights.

The Victoria Hall disaster affected the whole country through newspaper reports. As a result, new laws came into force which made sure buildings had a minimum number of outward opening doors. The emergency push bar was also invented which we still see today.

The Victoria Hall was still used right up to 1941 when it was destroyed in the war. A German parachute bomb got the better of it. 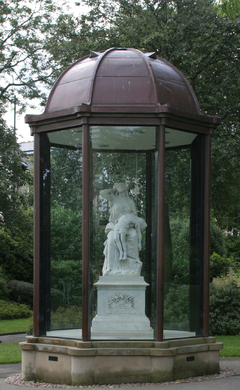 Most people are unaware of the Victoria Hall disaster nowadays. I have asked many people about it and they just give you blank looks. Thank God the memorial is there otherwise the memory of this catastrophe would have long faded.

I often have a good look at the memorial when passing. What a sad thing to have happened. Its quite hard to believe that 183 children died in this way. Its only fitting that the memorial should stand forever in a prime position.

Its nice to see Sunderland Council protecting and preserving the Victoria Hall Memorial.
If we were to go back to to those days I am sure this touched every single person in Britain ... and possibly the Empire.

Many people don't know what the memorial is all about.
I also don't think the memorial is in the right place.
I think a more prominent position would be more appropriately.
Its on the footpath at the side of Mowbray Park and you can't see it very well from Toward Road.
That's my two penneth worth.

I don't know about people being slightly ignorant on this.
I was passing a few days ago and stopped right beside it and spoke to a few friends I have not seen for a while and asked them what it was.
They seemed to know straight away.
They live close by Mowbray Park and possibly pass it regular but still they knew what the memorial was all about.

Mowbray Park is a great place to be in the summer months.
It has plenty of statues and the memorial is fitting.
I also think it is in the wrong place though.

I saw the memorial once but I didn't take too much notice.
What a shocking admission

It was a horrible turn of events. The mind can't imagine that amount of dead children in such a building. Its only fitting that the memorial stands in the City Centre park.

Made the headlines around the British Empire for all the wrong reasons.
A really sad time it must have been for all those families involved.

I wonder if the schools still teach local history and highlight things like this. The Victoria Hall disaster was a nasty event. Possibly for the time it may have been unstoppable. What a horrible thing to have happened. Such a loss with all them bairns dying in such tragic circumstances.