To begin with, William Henry Hills started the oldest established booksellers and stationers in Sunderland, Hills Bookshop. Indeed, this was on Christmas Eve, 1852. His very first shop was at 186, High Street on the corner with Nile Street. Of course, those days, this was the commercial centre in Sunderland before the town migrated westwards.

The local press also advertised the Christmas Eve Grand Opening, stating Christmas and New Years presents would be for sale. Of course, the presents for sale included illustrated and juvenile works, bibles, maps, school books and stationary. There were also diaries, almanacs and housekeepers account books for 1853 too.

By the 1860’s the shop became so successful that William Hills could afford to employ two assistants. The names of those two assistants were John Rutherford and James Patterson. Obviously, their jobs were to help out as the shop grew busier.

Since, Sunderland town centre was gradually moving westward, Hills moved with the flow to capture more trade. So, in the 1890’s, Hills & Co moved to 6, Fawcett Street, opposite the Town Hall. 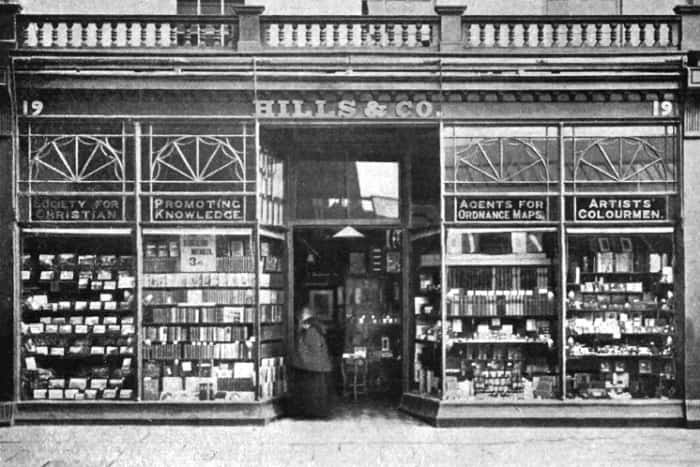 After the death of William Hills, John Rutherford and James Patterson then took over the shop. Soon after taking control, the partners moved to a larger shop at 19, Fawcett Street. John Rutherford sadly died in 1918, leaving a son Gordon and two daughters Hilda and Amy. Amy would go on to marry Ted Dean while Hilda would marry his nephew Edward Roydon Dean.

In 1929, Hills & Co then became a limited company run by Ted Dean, Edward Dean and Gordon Rutherford. Norman Patterson, the son of James, also had involvement in the business. However, this was only for a short time as he started his own business in Holmeside, Sunderland, ‘Northumbria Printing Works’. In the same year, Hills & Co moved premises yet again, this time to 17 Waterloo Place, Sunderland.

The ground floor of the premises in Waterloo Place was a former Jewellery shop. In contrast, the upper floor, owned by the Bible and Prize Book Depot was ran by two sisters. The sisters, called Misses Watson, held regular hymn services at the shop. They also had the nickname of ‘The Hallelujahs’ from local people.

However, in 1931 the company bought the deeds to the shop for £3,550. Of course, this meant that The Hallelujahs had to move out and Hills moved up. The first floor then became a bible and prayer book department. Indeed, a contract with local authority meant that throughout the war years, the company remained stable. 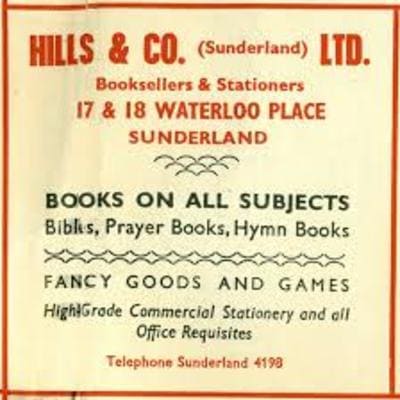 The shop next door, at number 18, was a pharmacy was ran by Dr George Morgan. However, Dr Morgan died in 1944, so Hills & Co bought number 18 for £8,550. In short, the two shops ran successfully together for many years as the stock expanded with the premises. Hills book shop was now also selling Gifts, Jewellery, Notepaper, Notebooks, Kodak films and Box Cameras. The same year also saw Edward and Amy’s son, John, join the company as an assistant.

The removal of the inner walls in 1950 saw the shops combine and enlarge. In 1956, after 64 years with the company, first as an assistant then director and chairman, Gordon Rutherford died. Charles Aylen, who was first appointed as company secretary in 1929 took the chair. In 1957, there was a ground floor extension costing £1,590 followed in 1963 by another £2,000 extension.

In the late 1980’s, after more than 100 years, the Rutherford family ended their interest in the company. They sold the business to George and Martin Preston together with George Malt who had joined Hills in 1982 as an accountant.

Finally, after more than 150 years of trading, the store had to close in 2006. In effect, the increase of supermarkets, book store chains and the all important internet meant Hills & Co could no longer compete. Martin Preston, the manager, explains that the closure is “due to market forces”. He then continues, “It is with great regret we’ve made this decision.” 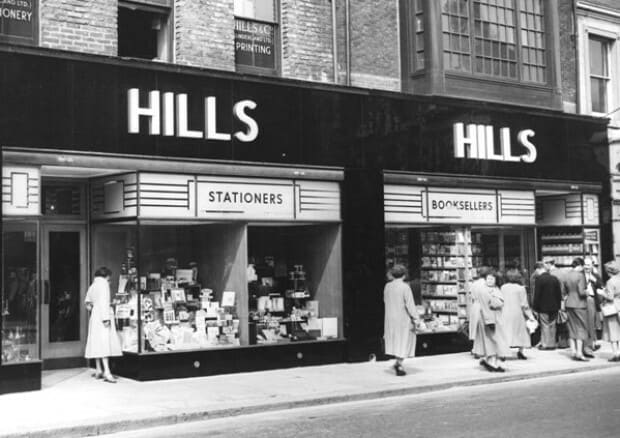 We now invite you to tell us of your memories of Hills Book shop in Sunderland. For example, when you bought your first book there. Alternatively, why you think so many book shops are closing down etc. Obviously you can make a comment below this article. But we also have the massive Sunderland Forum in which to do this too. The Sunderland Message Boards (SMB) are another way of writing about local history etc.