Indeed, this was a cold frosty morning on Christmas day in the East End of Sunderland in 1889. Mary Adams woke on the floor of her run down building in Hodgkin Street. She only had a dirty blanket to keep off the cold. It was 8 o’clock and Mary’s lodger was in the room above shouting for water. The lodger had a hangover from the night before. So Mary made her way to the backyard to collect the days water from a standpipe.

What she saw when she opened the back door would haunt her all her life. For there on the ground in a pool of blood, horrific head injuries and frozen solid, was the body of her mother. As Mary screamed the neighbours came running and so did local bobby Constable Dryden. Then the inquiry began into Isabella Taylor’s murder.

The last time anyone saw the 50 year old widow was when she was leaving her daughters house to head for her own in Zion Street. But before she could leave the yard someone struck her with three axe blows to the head shattering her skull. They took her body to the Church Street mortuary while making their enquiries.

The inquest opened on December 27th 1889, at the Market Hotel in Coronation Street, Sunderland. The Coroner, Crofton Maynard, was in charge and Detective Inspector Ridley gave evidence – they arrested nobody. Mary told how she had met her mother in the Old Market, about 9 0’clock on Christmas Eve carrying a basket and a bottle of spirits. They walked back to Mary’s in Hodgkin Street where at 10 o’clock her mother went to the Wheatsheaf pub. 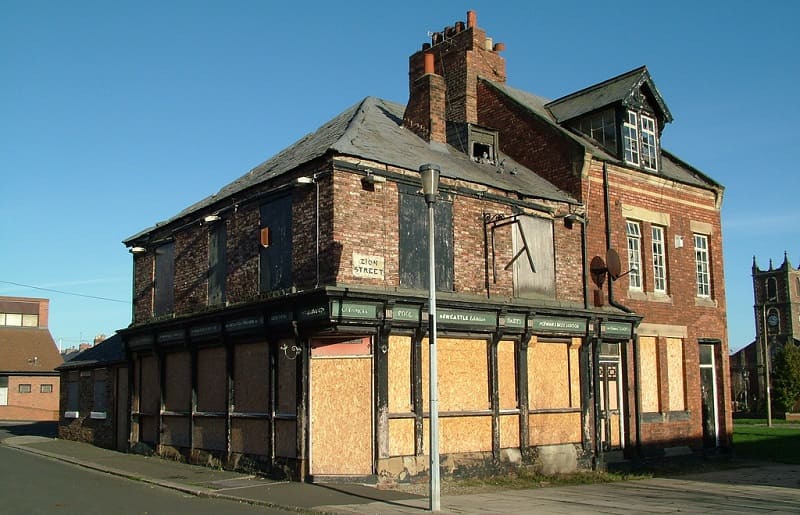 ** We have no date for this image of the Wheatsheaf pub, but note Holy Trinity Church in the background.

Widow Eleanor Pearce who lived in the same building as Mrs Taylor. She lived with her daughter and son-in-law, William Gillens and never saw Mrs Taylor. That night they had gone to bed at around 2am. Frances Gillens, Mrs Pearce’s 8 year old granddaughter, also lived with them told how she had seen Mrs Taylor dancing in the back lane at about 1am. Then at about 3am she saw her father lifting Mrs Taylor up at the bottom of the stairs.

Asked by the coroner what happened next, she said: “Mrs Taylor was murdered in the back yard”. Then he said, “was your father sober”? “No, he was drunk, and so was my mother”, answered the little girl. Asked what time her parents had gone to bed she replied: “About half past five”. The coroner asked: “What was going on in your grandmothers room”? She replied, “They were drinking whisky and eating cake”.

The coroner then asked: “Was there an axe in your room”? “Not in ours but in granny’s, she kept it in a cupboard next to the fireplace, she used it for chopping sticks”, said the little girl.

Then the coroner asked: “Did your father have the axe with him when he lifted Mrs Taylor up”? The little girl answered “No, my granny would not let him get it out of the cupboard because he might have chopped Mrs Taylor’s head off”. A gasp of shock came from the public gallery, and the little girl froze and put her hand to her mouth as she realised what she had said.

The coroner looked at the little girl and asked in a soft voice: “And exactly what had she done that he should want to chop off her head”. Frances turned to her parents, then looked at the floor sobbing: “Nothing”! The coroner continued: “you have told us a very good story now please go on, when your father went out to Mrs Taylor what did he say”? Whispering Frances said: “He told her to go away, but she wouldn’t’. ‘Then he asked granny for the axe and started swearing at her because she wouldn’t give it to him”. “My father had just gone to bed when Mary Adams came in and said her mother had been murdered”.

They adjourned the hearing for 10 days until 6th January after the little girl broke down. Despite the girls evidence, they allowed Frances to go home with her mother and father.

When the inquest started again coroner asked Frances, ‘Have your parents said anything to you about your statement’? After a pause she replied, “No”. A juryman then asked, “Did your father not take a stick to you, the night after you were here”? Frances replied, “No”. The juryman said to the coroner: “I heard from four different people that he beat her severely with a stick”. The little girl could not answer any more questions and was free to leave.

Her grandmother, Mrs Pearce, then entered the dock again. The coroner asked, “Is the girl’s statement about the axe true”? Repeating the original story given by her family, Mrs Pearce replied, “She’s telling nothing but lies”. William Gillens, the little girls father, would not give evidence, declaring he had nothing to say. Moreover, his wife gave the same story as her mother.

When Mary Adams spoke again she said Mr Gillens and her mother were not on bad terms. The police pathologist, Dr Robert Burns, confirmed that the axe found in the house fitted the wounds found on the victim. The coroner then turned to the witnesses and asked, “How is it that this poor woman could be murdered on the stairs and none of you know anything about it”? He instructed the jury to return an open verdict. But he concluded, 2The facts appear to be cloaked up, but some day the truth will come out”. However, since then, the mystery of the Hodgkin Street Murder still remains unsolved.

Obviously, you may comment here about the Hodgkin Street Murder. Indeed, tell us what you think or even if you know something worth revealing! However, after all this time, it certainly looks like the murderer got away with it. So, what do you think? With this being an unsolved murder case, we have put it in the crime category and also the mystery category.

Finally, this article has had a facelift. Indeed, the title used to be ‘A tale of Christmas Past’ for obvious reasons. However, it was in parts 1 & 2 and in need of polishing up which we duly did!