To begin with, Holy Trinity Church, is one of the oldest buildings in Sunderland’s East End. Indeed, in 1719 the residents of the fast growing port of Sunderland petitioned for a separate parish. This was because St. Michael’s at Bishopwearmouth, their local parish church, was always full. Then again, it was a mile walk up High Street too. In fact, it could no longer meet the needs of the growing community. 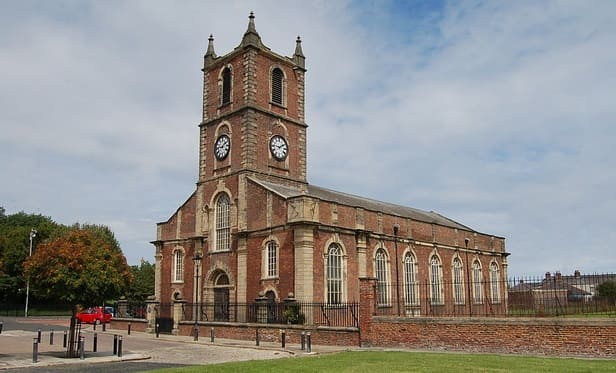 As a result, Holy Trinity Church got the go-ahead and on the 5th September 1719 consecration took place. The appointment of rector, Daniel Newcombe, got the credit for the design of the church. But the actual design was by William Etty of York. In essence, the church’s construction was from small, dark, hand made bricks which made it look gloomy from the outside. But the inside was very light and spacious with seven pairs of very large windows. Moreover, tall, slender Corinthian columns supported the gallery and the roof. 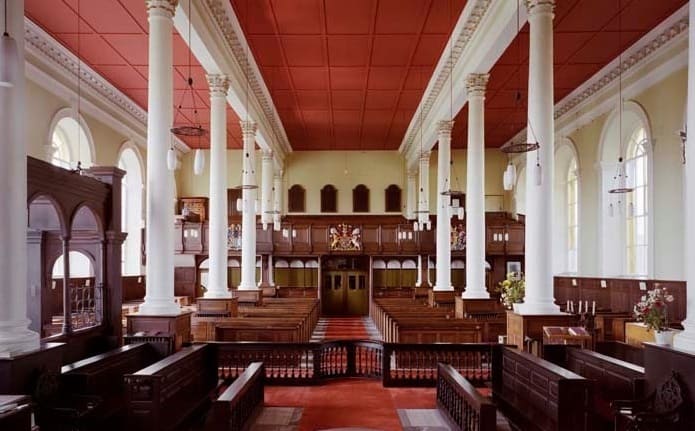 However, it originally had no chancel.

So at his own expense rector Daniel Newcombe added the present, near circular apse in 1735.

Obviously, the tall Corinthian columns and cherubic heads are the most extravagantly ornamental part of the church. Together with the frontal pediment, Holy Trinity has a unique character.

In 1803, there was the addition of the west gallery. Indeed, proudly and prominently on display in the gallery were 3 coats of arms. In the middle, the royal arms of George I of Hanover. Then on one side, those of Lord Crew the Bishop of Durham. Also, on the other side, the Bishop of London who actually consecrated the church. With the addition of the clock to the tower in 1856, it provided even more community focus.

As a matter of fact, the tower has a central high rusticated arch with triple keystones. Obviously, these are over the original double 6 panel oak doors and a semicircular over light. Moreover, the tall window in the tower has small-paned sashes containing the only old glass left after damage in WWII. The vestibule also contains a font with fluted marble bowl on turned limestone pedestal and sandstone base.

The first baptism’s were on 25th July 1719 when Primus Barwick and Mary Whiton had a christening. However, for much of its early life, Holy Trinity was the centre of local government. This is because the residents also wanted their own government as well as their own place to worship. So, there was annual elections for the parishioners to elect 24 gentlemen to run the civil affairs. Of course, this was under the chairmanship of the rector. The 24 gentlemen then gave local officials authority to collect the rates and keep law and order. But, they also had authority to care for the poor and cleanse the streets too.

Robert Gray, rector from 1819 to 1838 was the last rector to play a prominent part in town matters. Indeed his statue, by David Dunbar, stands in the disused central porch. It also has a complete and lengthy inscription recording his many virtues.

Generally speaking, in the late nineteenth century, community life in the East End began to break down. With this in mind, the number of people going to church started to dwindle. However, the church continued to be a focal point for the local community.

On the negative side, by 1988 the structure of Holy Trinity was in urgent need of costly repairs. Indeed, it has been on the Heritage at Risk register for several years. However, more alarmingly, it is one of the 7 Most Endangered buildings in Europe.

So with little choice, the final services were conducted on the 26th June 1988. A few days later, the handing over of the church to the Redundant Churches Fund ensured its future. Now, Holy Trinity Church will survive and the property will get the required maintenance it so desperately needs.

Holy Trinity Church is now a listed building that still stands in the heart of the old East End of Sunderland. Moreover, it is one of just two Grade I early Georgian churches surviving in the north east of England. But the once crowded churchyard is now empty of most of its memorials. 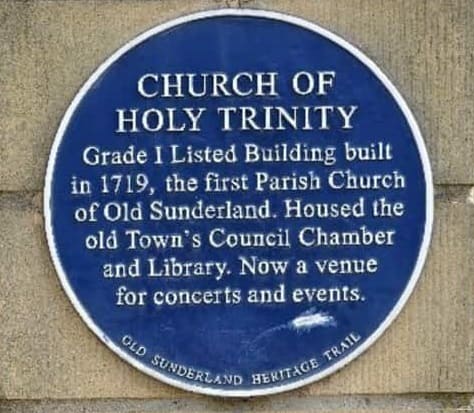 The surrounding public buildings, such as the assembly hall, the workhouse and the rectory are also no longer there. Indeed, the now deserted building stands in isolation as a memory to some of Sunderland’s wonderful historic past. But it is still accessible to visitors. 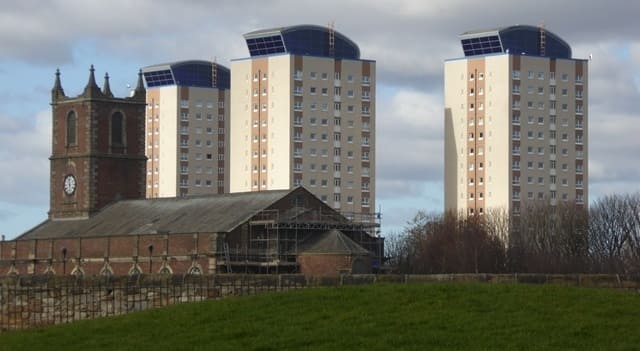 Of course, the image shows Holy Trinity – where the old meets the new.

Finally, you can find Holy Trinity Church at Church Street East, Sunderland, SR1 2BB. Many people sometimes refer to this area as Hendon, but it is the old East End of Sunderland.