Still standing, and located on the north bank of the River Wear in Sunderland, Hylton Castle stands proud. In addition, it has lots of visitors including many from outside the area. 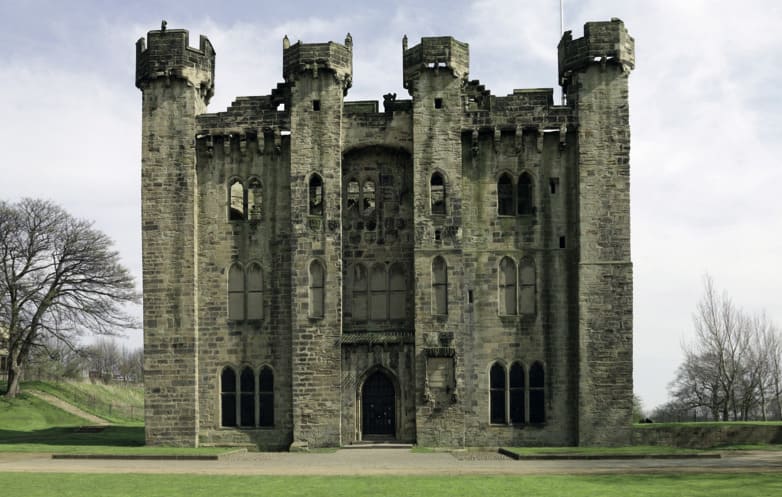 Furthermore, it is easy to find as there is a large housing estate adjacent, aptly called Hylton Castle Estate.

To begin with, the original castle was a wooden construction from a time just after the Norman Conquest in 1066. The building was for an influential family with the name of Hilton. However, the family name eventually became Hylton.

Building work for the current stone castle began in the 1400’s by Sir William de Hylton. At one time, Hylton Castle was indeed one of the finest castles in England. Its design is in the shape of a gatehouse and was mainly for comfort rather than defence.

Comfort those days is what we take for granted nowadays, but the influential Hyltons had the status to demand luxury. Indeed, in 1295, Robert Hylton became Lord Hylton. Thus, the title Baron Hylton came into being and this was the situation for many centuries.

In the 18th century, further changes to the interior and exterior took place. The castle remained the home of the Hyltons until the death of the last Baron in 1746. In essence, the castle does not stand alone. In fact, just to the north east stands the remains of the Chapel of St Catherine. Moreover, the funerals of some members of the Hylton family were on that site. 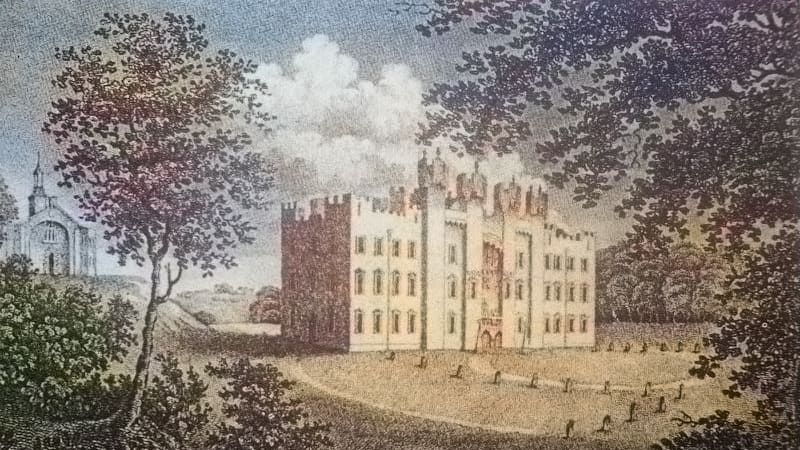 The castle is now an empty shell of course and you can only view it from the outside. This, no doubt, is to safeguard the ghost hunters who visit the castle from time to time.

The castle is now in the hands of English Heritage which is a charity that looks after English environmental history. Of course, both the castle and the chapel are Grade 1 listed buildings which give them much protection.

One of the features that you can still see are the coats of arms of various local families. These are carvings are engrained in the stone walls of the castle. Obviously, they include the Hyltons, Percys, Greys, Eures, Lumleys and the Washingtons.

We have an interesting article here which shows that the first president of the United States has his roots firmly in Sunderland. Of course, we are referring to George Washington and the Washington family.

Family crests in the stonework at Hylton Castle clearly shows the Washington Shield, although two stars are missing.

Before we continue, we need to point out that in ancient times, towns were much smaller than they are now. Indeed, Sunderland grew to be the dominant name out of the three areas at the mouth of the River Wear. These were, Monkwearmouth, Bishopwearmouth and Sunderland of course. Then as the town grew, it took in three other towns in 1974: Washington, Hetton-Le-Hole and Houghton-Le-Spring. Indeed, the City of Sunderland came into existence in 1992 to coincide with the Queen’s 40th accession to the throne.

So, as we see, the Hylton area was not part of Sunderland in those days. Be that as it may, the town had to expand due to the increasing population of the area. In other words, Sunderland is now a large urban sprawl with much diversity, so lets continue. 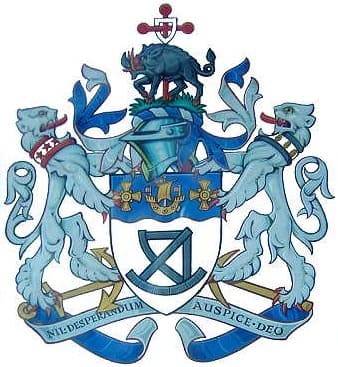 To clarify further on the Washington coat of arms, there were three stars and two bars.

In fact, we believe that George Washington adapted the coat of arms to design a stars and stripes flag. This of course has become the flag for the United States of America.

So, Sunderland is the ancestral home of George Washington, the first President of America. Indeed, the three stars from the Washington family crest are quite clear on the Sunderland Coat of Arms. Perhaps now readers will understand why we gave a small history of the City of Sunderland in brief earlier.

Nowadays of course, most people know Hylton Castle mostly for its ghost, the Cauld Lad of Hylton. Indeed, this ghost still haunts the castle, or at least that’s what many people believe. Nonetheless, the castle remains standing and is available for all to see.

Obviously, the influential Hylton Family lived in the castle for many centuries. Indeed, with the creation of the first peerage in 1295, the Barons continued with the occupancy of the building. So, let us list the Barons of Hylton:

Of course, after the death of the eighteenth Baron in 1746, the title fell into abeyance. This was because there was no male heir to the title. But a second creation of Baron Hylton occurred in 1866 when Conservative politician, Sir William Jolliffe, took on the role. He was the grandson of William Jolliffe and a co-heir of the original barony of Hylton through his grandmother, Eleanor.  Indeed, Elenor was the daughter of Anne Hylton, sister of the eighteenth Baron of the 1295 creation. However, with the castle no longer in use by the family, the current Baron lives in the south of England.

The Cauld Lad Of Hylton

Of course, we can’t speak about the castle without going in-depth about the Cauld Lad Of Hylton. In this case, the ghost is that of a stable boy, Robert Skelton from the 1500’s. Indeed, there are many legends. So, let us look at a few of them. 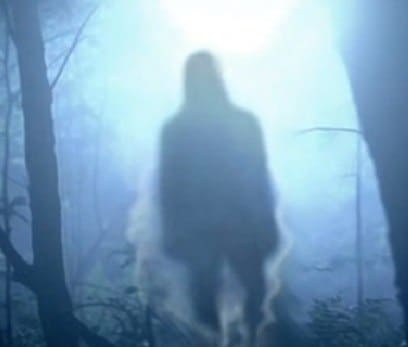 Firstly and possibly the most common, is when Skelton was sleeping instead of working one day. In essence, the Baron had ordered Skelton to prepare his horse for an important journey. But, the boy overslept. Of course, Baron Robert Hylton took offence when he discovered this. The baron, in a fit of rage, then picked up a pitch fork struck the boys head and killed him.

Another story tells us that Skelton was courting the Baron’s daughter. Since, the Baron didn’t approve of this, he murdered the young lad. Furthermore, the Baron may have cut off Skelton’s head and put his body in a well or deep lake.

Either way, the Baron went on trial for Skelton’s murder with the discovery of the body soon after. But the Baron had an alibi. This was because a heavy tool fell on Skelton in the barn and an old farm worker reportedly confirms this. Indeed, the Baron only attended the to the wounds. However, it is not clear how the body ended up where it did. Just to point out that the baron was fully pardoned in 1609.

Who Was The Cauld Lad Of Hylton?

Obviously, the ghost is of Robert Skelton and has the name of The Cauld Lad Of Hylton. To further understand the pronunciation of the ghost, readers need to know a little of the local language. Of course, modern references to the local language on Wearside is Mackem. Indeed, many common English words are spoke differently in Sunderland. In this case we refer to the word ‘cold’. In Mackem language, this has many different sounds. For example, Sunderland folk can say ‘card’, ‘cowld’ or ‘cauld’. So, on one night, a cook saw the naked ghost of Skelton who spoke and said he was ‘cauld’. Hence, the name Cauld Lad Of Hylton.

Futhermore, many staff of Hylton Castle would sometimes say they had seen or heard the Cauld Lad. So it goes, that some even said the ghost carried his head around under his arm. Obviously, being a young boy and a ghost, he was mischievous and enjoyed throwing dishes around. But he would only do this if the servants had left the kitchen in a tidy state. In contrast, if they left the kitchen untidy, the ghost would clean up for them. So naturally, the servants would more often than not leave the kitchen untidy

Rumour has it that the Cauld Lad would also suffer boredom with the castle at certain times. If this occurred, he would then go down to the river where he would sail the Hylton ferry. Indeed, by impersonating the boatman he caused more mischief. Thus, after taking the passengers fares, he would leave them stranded in the middle of the river.

Finally, the ghost of the Cauld Lad eventually went to rest, at least for a time. This was when the Hylton Castle servants gave him a green cloak and a hood.

They done this by laying it before the kitchen fire and sat waiting for midnight when the Cauld Lad appeared.

He took the cloak and hood and as he started disappearing they could hear his last words. In this case, “Here’s a cloak and here’s a hood, The Cauld Lad o’ Hylton will do no more good. However, as we see below, The Cauld Lad never did rest!

Obviously, The Cauld Lad’s actions suggest that he is acting more like a poltergeist. This is because of his mischievous ways. Another explanation says the Cauld Lad could be an elf or brownie who is under a spell. In this case, there is a release for him. That is to say, should people give him a gift, the spell no longer applies to him. To put it another way, perhaps his mischievous ways were to attract attention to this.

The Cauld Lad Of Hylton also sings a song which suggests how long he expects the spell to last. We break down the song into individual lines to help with the translation:

Obviously, The Cauld Lad, did not think his release from the spell would be soon!

To this day, many local people still insist the Cauld Lad is still haunting the castle. Indeed, there are loads of stories that circulate. For example, we hear how someone insists he recently saw the Cauld Lad playing ‘chicken’ with the passing traffic. There are plenty of other sightings of course.

The adjacent housing estate has a pub with the name of The Cauld Lad. However, due to the demise of pubs in the UK, its future is uncertain. But, it just shows how one murder 500 years ago can still have an influence on the area. 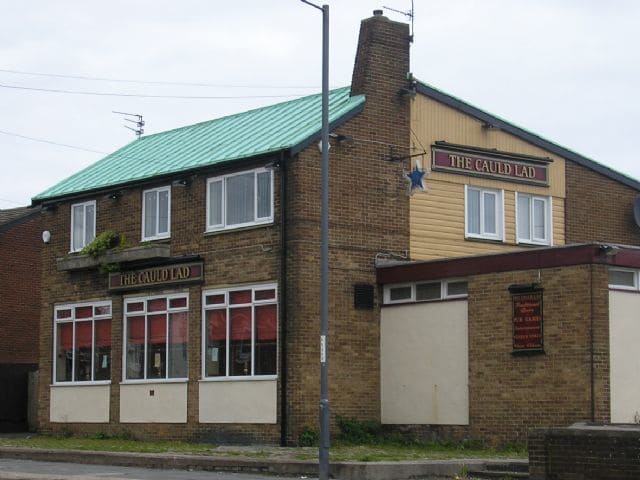 Finally, have you any sightings of the Cauld Lad yourself or do you know anyone who has? If so, please share your stories with us in the comments section below. Alternatively, we have the massive Sunderland Message Boards (SMB) in which to start a new post. Wearside Online is your one-stop website for all local matters.