Here we have the story of Jack Crawford, the Hero of Camperdown.

Jack Crawford, was a sailor who was born in Sunderland on 22nd March 1775. This was in a house on Thornhill Bank, (now Pottery Bank) in the East End. He was a keelman, at a very young age. Keelmen worked on large keel boats which took coal to to the waiting colliers ships that couldn’t sail up the shallow River Wear. 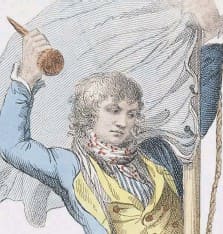 Jack Crawford went on to become ‘Hero of Camperdown’. During the Battle of Camperdown, off the Dutch coast, on the 11th October 1797, the colours of Admiral Duncan’s flag fell from Dutch gunfire. In those days, if the flag fell, the battle was over as it was a sign of surrender.

Jack, despite being under intense gunfire, climbed the mast and nailed the colours to the top using his pistol as a hammer. As a result, they went on to win the battle. In the following victory parade in London, Jack met the King. In recognition of his heroic act, he received a silver medal by the people of Sunderland. He also received a pension of £30 a year.

Unfortunately, Jack Crawford had to sell his medal when he fell on hard times.

Jack also became the second victim of the cholera epidemic and died in 1831. Being broke, they buried him in an unmarked pauper’s grave. However, towards the end of the nineteenth century, people renewed their interest in the ‘Hero of Camperdown’. 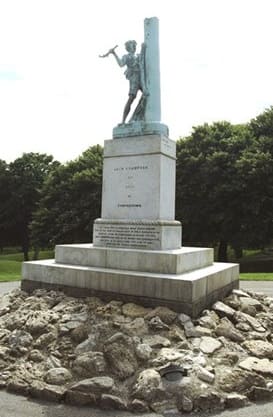 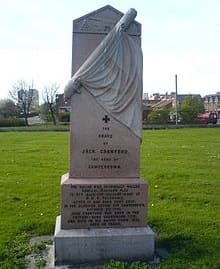 This resulted in the erection of a headstone in a Sunderland churchyard in 1888. This memorial is at Holy Trinity churchyard, Hendon, Sunderland.

A pub in Monkwearmouth, named after him, called The Jack Crawford, had a carved figure of him on the side of the building. However, German bombs destroyed the pub so they removed the figure. Indeed, you can now see this on display in the Sunderland Museum and Winter Gardens. His medal is also in the same museum.

Wearside Online allows visitors to comment on all our articles, so please leave a comment below if you need to. We also have the massive Sunderland Message Boards (SMB) in which to socially interact with other local people. Join in with us at the Sunderland Forum and make a new thread about any topic you like.