To begin with, the story of Jealous Johnson, describes how an emotion such as jealousy can totally destroy lives. The incident took place in Hetton (now in the City of Sunderland), County Durham. So, let us look back to that fateful day when Jealous Johnson shot dead the woman he loved.

Indeed, we go back to a cold Autumn morning in Hetton on Saturday October 31st 1891. A small group of men sat in the ale house by the warm fire drinking their beer. It was only 11am but Billy Johnson sat alone drinking his sixth glass of beer glaring out of the window. He was looking out onto Station Road, his mind tortured by drink and jealousy. Concealed under his jacket was a pistol, so the day wasn’t going to end well.

Billy was a middle-aged farm labourer, who for 17 years had lodged with Margaret Addison. Margaret was a widow in her fifties and had a small terraced home at Four Lane Ends. Billy’s love had grown for Margaret over the years and he had proposed many times. However, Margaret always turned him down as she did not feel the same. For the last year, local miner Andrew Simpson visited Margaret often, and Billy saw him as a rival. 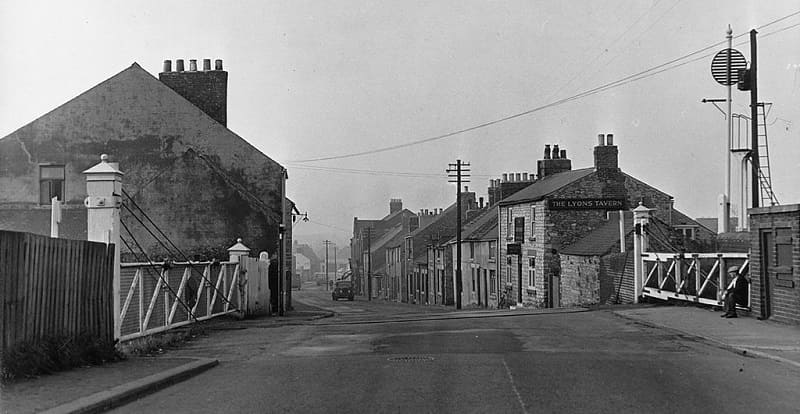 Indeed, Billy was full of torment. This is because from his room, Billy could hear the couple laughing together. Also, from his window, he could see the couple kissing as Andrew left the house. These images came to the fore as Billy looked out the ale house window to see Margaret coming out of her house on this day.

Margaret was looking good for her wedding with Andrew at Hetton Village Church. In her cream gown and headdress carrying a small bouquet of flowers, Margaret began walking down Station Road with her bridesmaids, family and friends.

At the same time Andrew left his home smartly dressed. He was with his relatives walking along Springwell Terrace hoping to follow his fiancé to church. Then, Billy calmly walked outside, just as Margaret passed the ale house window. It wasn’t until Billy ran up behind Margaret and shot her twice in the head that anyone notice him.

Margaret fell to the floor with blood flowing through her wedding dress and onto the road. Andrew, still in Springwell Terrace, heard the shots and as he turned the corner, he saw the gathering crowd and ran over. But what he saw was too much for him and he collapsed to the ground in tears.

Nobody tried to stop Billy, who walked calmly to the police station to give himself up. Sergeant Cartwright was out but his wife was in the office. Billy amazed her by saying ‘I have come to give myself up for the murder of my landlady’. When she told Billy that her husband would not be back for an hour, he sat down to wait for the sergeant. Meanwhile, outside, Margaret’s blood-soaked body was being carried back to her house.

When the sergeant returned, a small crowd was gathering outside the police station. Then, after hearing Billy’s confession, the sergeant handcuffed Billy and walked him through the crowd to Houghton Police Station. On the way, and without regret, Billy said he was happier now than if they were to marry. He continued, ‘I made up my mind to stop the wedding and if I could have got closer to Simpson, I would have shot him as well’.

On Wednesday December 2nd 1891, at Durham Assizes Billy came up before Mr Justice Wills. In front of a packed gallery, Billy pleaded guilty, refusing any defence offered to him.

After putting the black death cap on his head, the judge said, “You were driven by jealousy and were determined this woman you shot should not be married to another man. Under those circumstances I can hold no hope that the sentence of the law will not be carried out. I implore you to make use of your remaining time on earth and prepare for the great change that will come over your body. The sentence of the court is that you will be taken hence to a place from which you came and hence to a place of execution, where you shall be hanged by the neck until you are dead and shall be buried within the precincts of the prison. May the Lord have mercy on your soul”.

The execution was in 20 days time and Billy was to go to Durham Jail until then. On the 22nd December 1891, at 8am precisely, with a white hood over his head and the noose around his neck, Billy Johnson could murder no more!

This tragic story of Jealous Johnson demonstrates just what can happen in situations like these. Obviously you may comment here on this terrible crime below if you wish.

You can also start a thread about the Jealous Johnson crime in the Sunderland Forum too. Finally, if you wish to share you images with us at Wearside Online, please contact us. We are passionate about Sunderland and the area around Wearside.