To begin with, the partnership of Thomas Jopling and Joseph Tuer would be the start something big in Sunderland. Indeed, it would be the beginning of the longest established department store in Sunderland. In 1804, Thomas Jopling and Joseph Tuer opened a drapery business at 174-178 High Street East. The name of the shop was simply, Jopling & Tuer with the name Joplings Department Store coming later. 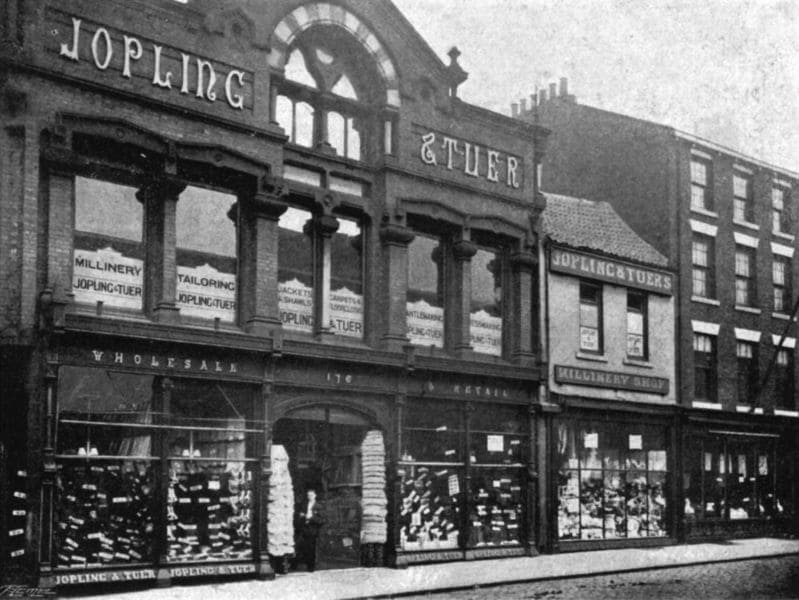 In 1891, Stephen Moriarty Swan and Robert Hedley bought the company out. They traded as Hedley, Swan & Co but the store was still known as Jopling & Tuer. This is because the name was bringing in much business, such was the goodwill.

The two storey store became fully stocked and was expanding, indeed by 1900, the staff numbered 100. On the ground floor there was gentlemen’s clothing, ready made and tailored. In contrast, the first floor was for ladies clothing, household furniture and the tailors workrooms.

By 1919, the store’s business had expanded so much they had to move to bigger premises. With this in mind, Joplings Department Store moved to the top of High Street West. Of course, this was the heart of the town’s commercial district by now. On the day of the grand opening, the police were in attendance to help control the crowds. This was because Joplings decided to have the biggest half price sale Sunderland had ever seen.

The store also had their own money. Joplings money was, in fact, tokens that people could get and pay for over a number of weeks. 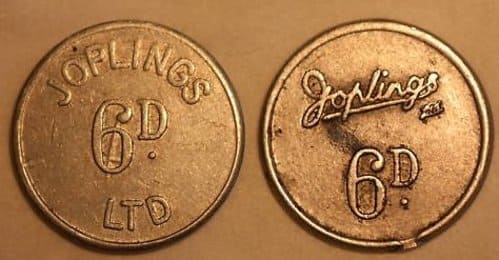 Moreover, people could buy a £1 token for sixteen shillings. If they were really hard up, they could sell the token for real money, at a discounted price of course.

Furthermore, it was around 1930 that people began to refer to the store as Joplings. This was when Hedley, Swan & Co decided to stop putting their names on any adverts for the store. The move to bigger premises also allowed the firm to expand their trade. Indeed, on the top floor they opened a restaurant too. For the most part, the waitresses would wear green uniforms with pink pinafores over the top.

In 1952, the ever expanding store became a limited company. However, in 1954 disaster struck. In December of that year, in the run up to Christmas, Joplings were advertising ‘Santa Claus is Here’. But, he did not stay long because on the Tuesday night of 14th December, a fire completely destroyed the store. Of course, all of its contents went up in smoke too. Obviously, it would take more than a fire to stop a store with the reputation like Joplings. 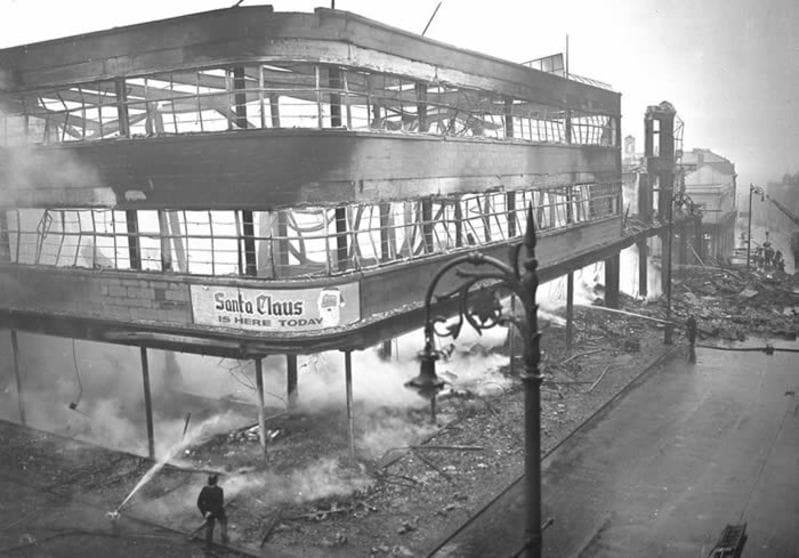 Joplings in Sunderland was destroyed by fire

Going back to where they started in High Street East, Joplings Department Store was back in business within six weeks. However, this was to be only a temporary move for the store. This is because plans were already in place to start construction on a new site for a permanent home. In fact, this was for a new 4 storey Joplings Department Store in John Street. This building was complete and ready for business in May 1956. 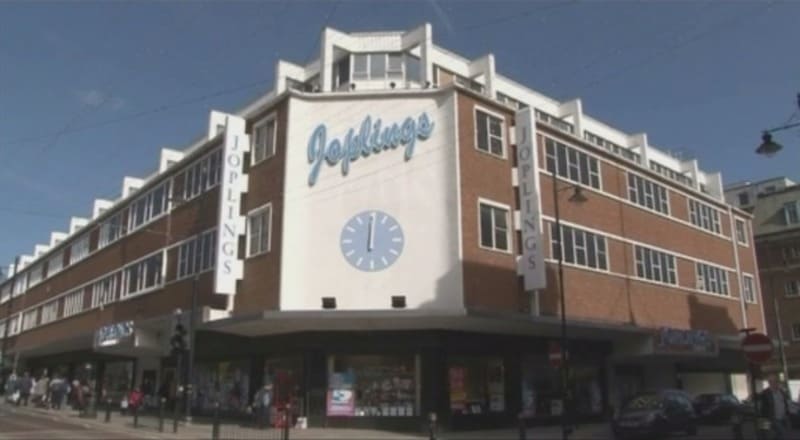 The new store would also include an escalator, the first of its kind ever seen in Sunderland. The escalator, could only go up but lifts were available too. Since then, Joplings have also added a clock to the outside of the building. The chimes ring out every quarter of an hour but are of a modern flavour. Joplings could now have the name, Harrods of Sunderland, the high class department store but with reasonable prices. Indeed, Joplings was in direct competition with Binns for this title!

Joplings is now on the market and up for sale. Its present owner, the Merchant Retail Group, say it has no option. Even if a buyer comes forward, it could still be the end of the Joplings name in the city. Such a devastating blow could rip the heart out of another city plan. Of course, we refer to the multi-million pound regeneration plans for the Sunniside area of the city centre.

Indeed, the Joplings closure announcement comes as a complete shock. This is because in May, managing director Philip Samuel told the Echo things were rosy. In fact, he said he could see no reason why the store shouldn’t continue to operate for another 200 years!

The new owners of Joplings will take over Sunderland’s oldest store on Monday, February 28, 2005. This is when Merchant Retail hand it over to Liverpool-based department store operator, Owen Owen, in an £8million deal. The store also held a huge clearance sale, selling off stock at up to 50 per cent off. This was prompting fears that the store was closing altogether. New boss David Thompson allayed those fears once again.

Thompson says that the jobs of 181 workers were safe. He also says the store itself and the 200-year-old Joplings name were safe too. “The store will be operating as Joplings. It is important, with all the history associated with that name, that we continue to do so,” he said.

The future of Sunderland’s flagship Joplings department store is once again in jeopardy. This of course comes two years after it survived the axe. Joplings’s Liverpool-based parent company, Owen Owen, collapsed two years to the day after taking control of the John Street store.

Obviously, Owen Owen’s takeover of Joplings two years ago seemed to have guaranteed the long-term future. Indeed, they saved a name which has been a fixture of Wearside’s retail landscape for more than two centuries. In February 2007, Owen Owen Ltd went into receivership putting the future of the store into doubt yet again.

Finally, on 19th June 2010, Joplings shut their doors for good. With the redevelopment of Sunniside about to happen, many uses for the old Joplings Department Store will come forward. Of course, this includes the possibility of workshops and residential usage. 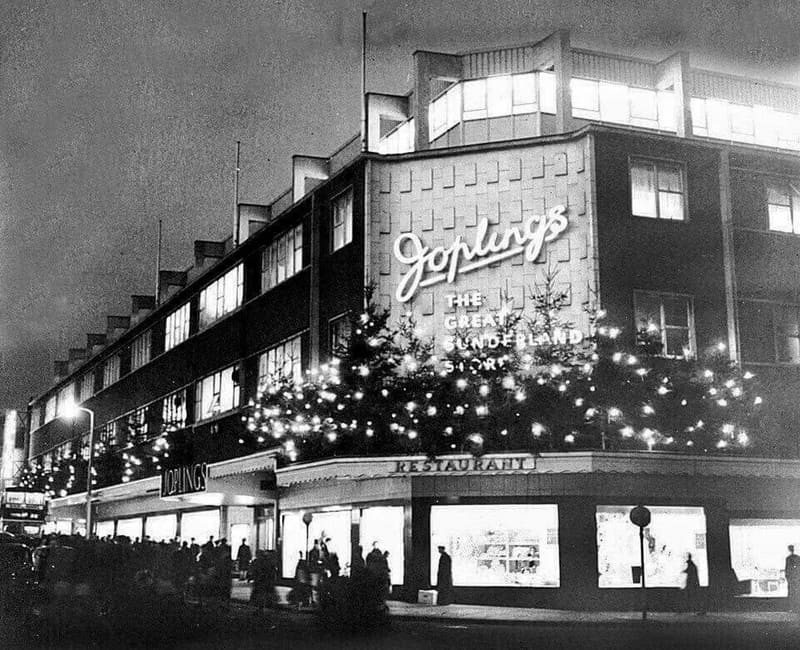 Tell us about your memories of the Joplings store in the comments section below. For example, can you remember your visit to Santa’s Grotto there?

You may even let us know of your experiences by opening a thread in the massive Sunderland Message Boards (SMB). The Sunderland Forum is like the Wearside Blogs here – family friendly. So, it is suitable for all family members.

One Response to Joplings Department Store