When Henry was still a child, the family moved to Kent. He then joined the army and the rest is history as they say. 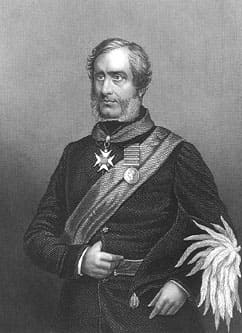 In the First Anglo-Burmese War (1824–1826), Havelock served with distinction. Then he moved back to England where he would marry Hannah Shepherd Marshman. Hannah was the daughter of a Christian missionary, and over a short time, Henry became a Baptist. Later he would introduce some of his new family’s missionary ideas to the army. Not only that but he began to distribute bibles to all soldiers.

By the time he served in the of First Afghan War in 1839, Henry Havelock received promotion to the rank of captain. He then made the grade to Deputy Lieutenant-General of the infantry division in Kabul after his column defeated Akbar Khan on the 7th April 1842.

In his spare time he would write reports about his involvement in various skirmishes and battles. When the these reports got back to Britain, sometimes they would appear in the press. Due to his military episodes, his next promotion was to Deputy Adjutant-General at Bombay. Then around 1849, Henry returned to the UK and helped to run the Stepney Baptist Academy.

Henry Havelock soon became Quartermaster-General and went back to India in 1852. Then by 1854, he became Adjutant-General, India. Soon, he would help to quell insurgents in the Indian Rebellion at Lucknow and Cawnpore. Despite being vastly outnumbered, Henry Havelock and his troops managed to defeat all rebel forces. However, it was Lucknow that proved to be his downfall.

His troops were battle weary and many were suffering from disease. So, he didn’t risk fighting for Lucknow on two occasions. But on a third attempt, with reinforcements, he captured Lucknow on the 25th September 1857. But soon after a second rebel force arrived, Henry Havelock and his soldiers found themselves trapped. On the 24th November 1857, a few days after the siege ended, Havelock died due to dysentery. His tomb is in an area of Lucknow. 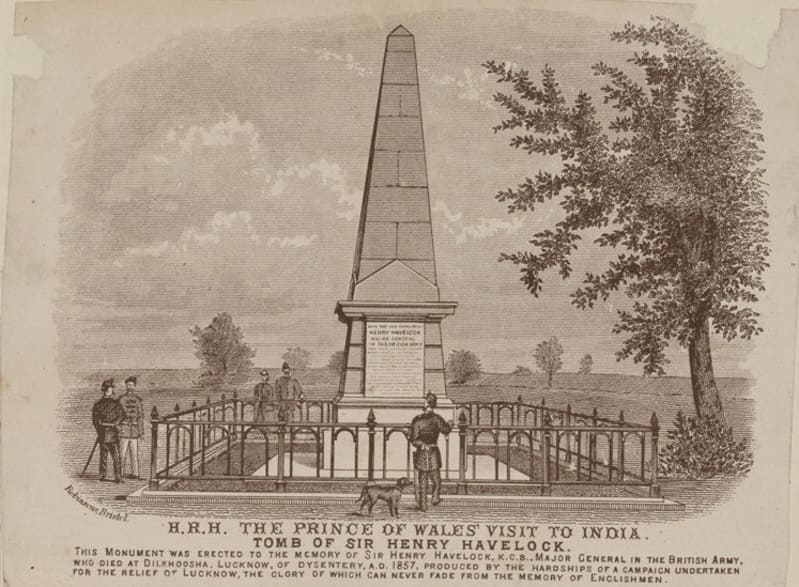 Henry Havelock knew about his new status of baronet, however, he never knew of the major-generalship which came shortly afterwards. His widow and son, Henry (who took his fathers baronetcy) each received generous pensions.

Of course, Major General Sir Henry Havelock has a grand statue in his home town, Sunderland. This is on Building Hill in the city’s Mowbray Park. His statue looks west towards his place of birth. On the statue are these words: Born 5, April 1795 at Ford Hall Bishopwearmouth, Died 24 November 1857 at Dil-Koosa Lucknow.

In Trafalgar Square, London, stands another of General Havelock’s statues. There are three statues in Trafalgar Square and one of them is of a man born in Sunderland. William Behnes was the designer of both statues, of course. 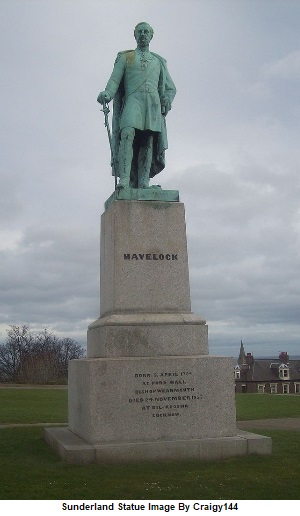 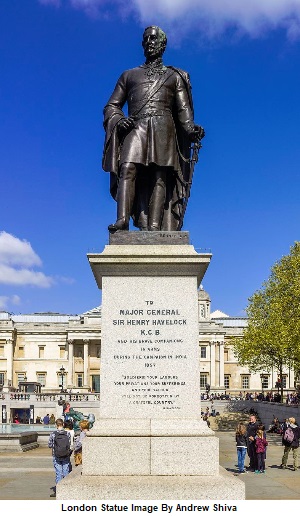 Major General Sir Henry Havelock has many places named after him, including his home town of Sunderland, of course. For example, we have General Havelock Road in Ford Estate, close to his birthplace. Then we have a small housing estate called Havelock Park, again close to where he was born. But, there are other places that bear his name in Australia, New Zealand, Canada, America and India.

Please leave your comments in the box below. Alternatively why not create a new thread in our massive Sunderland Message Boards (SMB). The Sunderland Forum is an ideal way to socially interact with other local people.