Malcolm Fairley AKA The Fox

To begin with, Malcolm Fairley is an extremely evil man guilty of rape. So, this article could be disturbing to some sensitive people. Therefore, only read on should you really need to learn about this despicable Wearsider.

Born in 1952, Malcolm Fairley was the youngest of nine children and indeed was a very shy family member. He grew up in the Silksworth area of Sunderland but his shyness didn’t stop him from committing crime. In fact, as a teenager he got in trouble regularly for theft and burglary.

Nonetheless, despite his petty crimes, Fairley managed to find a wife by the age of 19. However, his wife soon found out that Fairley was violent and the marriage came to an end. But, he soon found another wife and settled with her in nearby Peterlee. Indeed, things must have been working for a while because they had three children together.

Malcolm Fairley AKA The Fox

In 1983, Fairley’s second marriage was breaking down so he moved down south to Bedfordshire. Working as a labourer, Fairley’s warped mind was deteriorating further and he soon began exercising his true character. In reality, his violent nature and criminal mind combined to unleash a reign of terror during the Summer of 1984.

People nicknamed him The Fox because he had the ability to escape capture by getting away through the woods. However, tension around The Chilterns area was pretty tense. The people were so angry that vigilante groups formed and patrolled the streets. Some people would even hide in barns and other places trying to catch The Fox on his prowl. 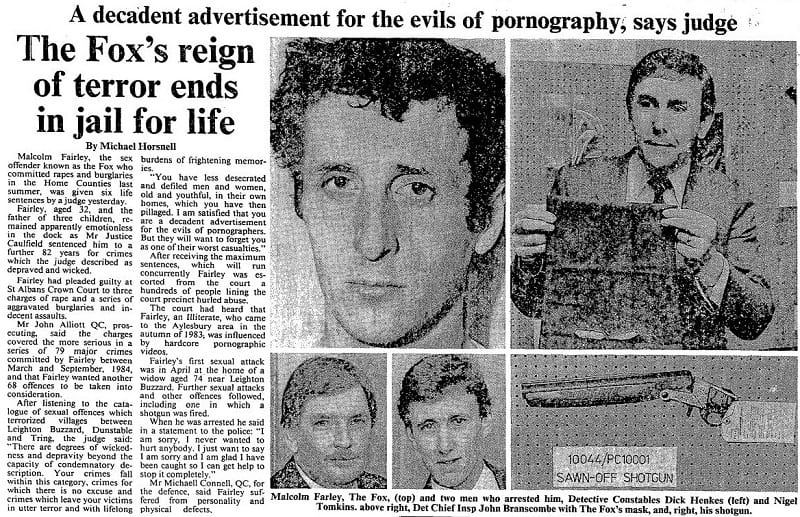 Indeed, Malcolm Fairley AKA The Fox made most newspapers

So, let us examine what really happened in that terrible period of Summer 1984.

11th April 1984, The Fox gained entrance to a house in Linslade, then assaulted a 73 year old woman in her own bed.

10th May 1984, Fairley stole a 12 bore double-barrelled shotgun together with ammunition from a house in Cheddington. Then, on the same night he sexually assaulted a 35 year old man.

6th June 1984, Fairley broke into a house in Grove Park, Tring. There, he stole a 12 bore single -barrelled shotgun, more ammunition and other tools.

9th June 1984, the criminal broke into an empty house in Heath and Reach. Then on the same night he got into a house in The Heath, Leighton. Furthermore, here he took a shot at the occupier. As a result, the householder lost a finger.

6th July 1984, Fairley broke into a home in Bideford Green. He made his way to the bedroom where a young couple lay in bed, then he tied them up. On this occasion, the woman screamed, so Fairley fled the scene.

10th July 1984, the scumbag gained entrance to a home near Bluebell Woods, Linslade. This is where his evil crimes deteriorated even further. He woke up a couple who were in bed, tied them up and raped the woman before he took off.

12th July 1984, The Fox was prowling outside a kitchen window at Edlesborough but fled when the homeowner chased him. However, he continued to look for more opportunities that night.

13th July 1984, the evil Fox raped another woman. This was when he broke into another house in the village of Edlesborough and he had a shotgun with him. He tied up two siblings, a brother (17) and sister (18) together with the girl’s 21 year old boyfriend. He then raped the girl. But, as if that wasn’t enough, he went for a drink and came back to rape the girl yet again. In fact, he even sexually assaulted the two young men too.

17th August 1984, The Fox struck again but this time in Brampton-en-le-Morthen, South Yorkshire after he decided to head north. Here, he raped a woman before continuing his travel back up to his home area, Peterlee, near Sunderland. However, after his crimes here, Malcolm Fairley was to leave some vital clues.

9th September 1984, Fairley who was back in the south by now, broke into a house in Milton Keynes.  Moreover, there he attacked the woman occupant with a knife.

11th September 1984, police put Fairley under arrest at his home in Kentish Town, London, at 7.30pm. While under arrest, he was took to Dunstable Police Station for questioning. 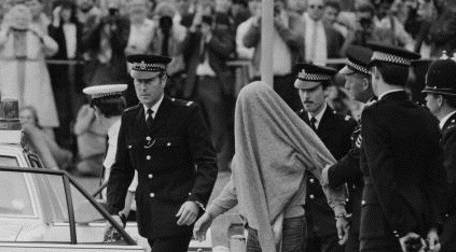 14th September 1984, Michael Fairley appeared at Dunstable Magistrates’ Court. He had to answer to three charges of rape, two burglaries and possession of a firearm.
The waiting crowd was understandably hostile towards him of course. The police ensured his safety while he had his head covered in a blanket.

26th February 1985, Malcolm Fairley AKA The Fox appeared at St Albans Crown Court and received six life sentences. The twice-married father of three pleaded guilty to 13 charges. To clarify, these included three rapes, two indecent assaults, three aggravated burglaries and five burglaries. Not only that, but he wanted the court to take into consideration a further 68 cases.

In his defence, Fairley said, “I wanted to stop it but I couldn’t. When I got the gun I felt I could get what I wanted”. Fairley had no experience with guns and presumably after he accidentally shot someone’s hand, that would be the last.

Without doubt, the turning point in this disgusting crime spree was when Malcolm Fairley travelled north in August 1984. While he was in South Yorkshire plotting another crime, he reversed into a tree near his victim’s home. In fact, some paint from his car lodged itself on the tree. Even though this was only a small amount, it was enough for the police to gather and analyse.

Using the technology at the time, they discovered that the colour was indeed harvest yellow.

Then, using the DVLA database, they were able to establish that were less than 1500 cars in the UK with this colour. In this case, Malcolm Fairley used a harvest yellow Austin Allegro.

Malcolm Fairley’s crimes were much more serious than the simple list above of course. For instance, the mental damage done to his victims and those who witnessed his actions are long-lasting. Indeed, his methods of tying up victims using their own clothing and other things at hand were his trademark. Not only that, but he would take materials which might have a sample of his semen still.

Also, in Tring he entered the empty house and waited for the occupants to return. While waiting, he looked at some picture, watched a few videos and cut the telephone line. Indeed, he would do similar things during his crime spree. Moreover, this was in an area with the name Rape Triangle because of Fairley’s actions. So the police were swamping the area to try and ease the residents’ minds. Because he would often eat snacks while waiting for his victims to return, police named the investigation, Operation Peanut.

On his trip north in August 1984, he also made a mistake of hiding some evidence in a farmer’s field. In fact, here he hid the shotgun as well as pieces of linen used in his crimes. Farmers know their own fields, and in this case, an eagle-eyed farmer found the stash so he alerted the police. Now the police had all this this evidence together with flecks of paint from his Austin Allegro car. In this day and age, the police would be able to trace another ‘Fox’ quickly with so much evidence. However, in those days they had to work that little bit harder. But, it was just a matter of time before they nabbed their man.

In short, Malcolm Fairley confessed about his evil crimes to police almost immediately on capture. However, the police wanted to gather as much evidence as possible. In this case, they knew the offender was left-handed. With this in mind they asked Fairley to put on a wrist watch. From this action, they were able to confirm Fairley’s left-handedness.

Further evidence included the scratches on Fairley’s harvest yellow Austin Allegro were roughly where police believed they would be. Obviously the colour of his car matched the flecks from the tree he collided with in Brampton-en-le-Morthen.

Moreover, on some occasions he wore a mask made from material cut from his trousers. The police indeed found two pairs of trousers in his car where this material come from. In fact, there was much more evidence to back up Malcolm Fairley’s confession. Generally speaking, they were not going to allow The Fox to continue with his crime spree.

DNA evidence was also available from the linen he hid in the farmer’s field. However, DNA was in its infancy those days and police had to summon help from West Yorkshire police. Obviously, they had their own problems with the Yorkshire Ripper. Of course, this involved one of the biggest hoaxers Britain has ever witnessed. Just to point out that the hoaxer was also from Sunderland. Indeed, we are talking about Wearside Jack – his conviction came about because of a DNA sample.

** See New Information In The Comments Section Below.

Wearside Online can’t confirm this, but rumour has it that Fairley has a new identity and is free once again. So, if anyone can confirm this we would be grateful if you could tell us here. However, if true, it would be unwise to expose his new identity and whereabouts if you know this information. If the rehabilitation of Malcolm Fairley has been a success, then should his release (if true) alarm us?

Finally, here we have a a 30 minute chat by two ladies who found the case interesting. If you wish to comment on this article please do so here or in the forum.

20 Responses to Malcolm Fairley AKA The Fox