Due to the Westminster elite dragging their heels on the Brexit issue, Nigel Farage is organising a march. Indeed, this will be a 280 mile trek from Sunderland to London. The March To Leave the EU will begin in Sunderland on March 16th 2019. The marchers will arrive in Parliament Square, London on March 29th. Obviously this is the day that the UK is to leave the EU.

Organisers say that “Despite 52% of voters choosing Brexit, only 24% of current UK MPs voted to leave. An extension of Article 50, thereby kicking the can further down the road, is completely unacceptable.”

Those wishing to join in some or all of the march can do so free of charge. However, there are official packs for those wishing to pay. For £50.00 you get an ‘official March To Leave kit’ which includes a waterproof coat, beanie hat, gloves, t-shirt, water bottle, wristband and a high visibility blue jacket. For those marching for 2 or more days there is accommodation and travel available free of charge.

Obviously the march will take place in stages. The first part of the march will go from Sunderland to Hartlepool. However, it appears that you don’t need to march the whole way. In effect, you are most likely to walk about 20 miles then get transport to the next departure point. But, expect to walk for about five hours. So, walking at 4mph that will be probably enough.

There will be core marchers who will continue all the way and organisers are looking for cheerleaders. So, are you up for a little exercise? Then join Nigel Farage in Sunderland on March 16th 2019 for the epic 14 day march. If you don’t plan to walk too far, why not just join them as they march out of the city.

The city has already told Westminster what it wants and the March To Leave is another way of telling them. The money markets were always going to recover after the initial shock and it did. 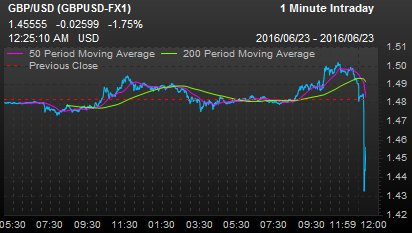 Money market when the Sunderland result came in

Whether you voted leave or remain in the EU referendum, its up to all of us to honour that result. In particular, those politicians who represent us should speak on behalf of the voters wanting to leave. The UK is the home of democracy, so the politicians should ensure they acknowledge and act on the result. Obviously, in a democracy, anything other than honouring the referendum result will not do. After all, we don’t have a farcical situation like this Brexit debacle in general elections do we?

March To Leave have their own website and here are a few videos to explain further:

You may leave a comment about this article  in the comments section below. Alternatively, why not make a post in the massive Sunderland Forum. Our Sunderland Message Boards (SMB) are an ideal way to socially interact with other local people.