Meanwhile Back In Sunderland

In brief, this is an ITV documentary aptly titled ‘Meanwhile Back in Sunderland’. Watch the famous Black Cats’ documentary film below.

To begin with, on 05/05/1973, Sunderland AFC won the FA Cup for the second time in the club’s history. Indeed, SAFC went to Wembley as a second division side to play Leeds United in the FA Cup final.

Leeds United were riding high in the old First Division then and Sunderland was one league below them. The odds were firmly against SAFC that day with no second division side winning the cup since 1931. 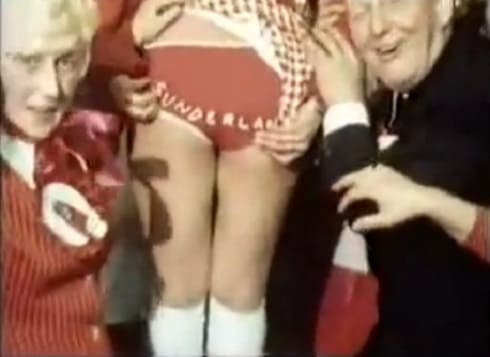 Remarkably, a documentary team went about filming things, just in case Sunderland were to topple the Mighty Leeds. In short, the documentary is titled ‘Meanwhile Back In Sunderland’. Obviously, filming took place before, during and after the game. The documentary is a tear jerker every time you watch it. All in all, there are flags flying, rattles ratcheting and rosettes firmly displayed. There is also plenty of Mackem pride in the atmosphere.

Overall, many claim that at that particular time, Sunderland folk had the name ‘Geordies’. However, through the seventies, the Mackem army was coming into shape. Then later on, the crowd began to sing about both Geordies and Mackems. Generally speaking, Mackem is now in use for all matters regarding Sunderland and SAFC.

Sunderland outplayed Leeds United on the day and also won 1-0. Indeed, it was a perfect goal from Ian Porterfield that won the day with a goal that Sunderland fans will never forget. Obviously, a memorable double save by Jimmy Montgomery (Monty) made the day even more special. Also, who will ever forget Bob Stokoe at the end of the game running towards Monty. This was so that he could give him a great big hug.

This video by ITV is indeed an SAFC masterpiece. Moreover, the documentary has many clips to help immerse you in the atmosphere on the day. On the whole, it is a truly outstanding documentary capturing history as it happened. Furthermore, it’s here in four parts for all to enjoy.

Meanwhile Back In Sunderland Videos

Bookmark this page so you always have it available to watch!

Finally, congratulations to the ITV documentary makers who have immortalised a special day for Sunderland supporters. Indeed, their documentary film brings back so many memories to Black Cats fans. Wearside Online can’t thank those film makers enough.

What are your memories of Sunderland’s fine 1973 FA Cup win? Did you go to Wembley or did you watch the game live on television? Did you or anyone in your neighbourhood also have a street party? Whatever your recollections are of the 1973 FA Cup Final, let us know in the comments section below.

However, we also have a massive Sunderland Forum too where you can make your own posts. Please note that Wearside Online and our Sunderland Message Boards are ‘family friendly’. As such, we don’t allow swearing or similar silliness, so our forums are suitable for people of all ages. Obviously we have a specific forum especially for Black Cats chat!