The mystery of Missing Miss Molly began on 14th January 1949 and still continues to this day. Mary Burslem was a dancer and entertainer who took the stage name Molly Moselle. She was 33 years old and working as a stage manageress for an Ivor Novello show called The Dancing Years. This was at the Sunderland Empire Theatre in the winter of 1949 and it was then when she disappeared.

She had left her digs telling her landlady she was going to post a letter and she never returned. As the rumours about her and what might have happened began, Sunderland detectives spoke to her fellow performers. They described Molly as a happy woman with a strong personality. 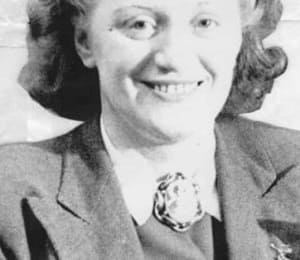 They also thought she had lost her memory and was somewhere safe in England. The police followed other suggestions such as suicide, murder or she had fallen into the river and drowned. They also made investigations in Liverpool where her family lived. Also in London and Sheffield where some of her boyfriends lived and at railway stations all over the country. Still they found nothing.

Molly had a long history of troubled relationships with men. But, for 16 years she devoted herself to a married man who was unable to get a divorce, a comedian called Bunny Doyle. In 1948 Bunny had deserted Molly for the principal boy in one of his pantomimes which left Molly feeling very bitter and hurt.

She turned to a rich fat man called Walter Hattersley who owned a top hotel in Sheffield. A few months later, Molly was telling her friends about the engagement between her and Walter. But she could not wear the £200 ring he had bought her as it was too valuable.

Unfortunately, Walter had never mentioned anything about an engagement. Indeed, he had already been married before and was old enough to be Molly’s father. A few stormy months later Walter found Molly drunk on his bedroom floor and ended the relationship. Molly then phoned Walter on 22nd November 1948. But he hung up on her and she started to sob “it’s all over”.

As the weeks passed, her friends knew that she was still unhappy. Then, on Friday 14th January 1949, she had a lunch time drink with an electrician from the show. Molly told him that she had written to Walter and received a letter from him that morning. Trying to hold back tears, she would not say what was in the letter.

After lunch Molly went shopping in Sunderland then returned to her digs in Eden Street, near the theatre. She then told her landlady she had forgotten to post a letter. She went out into the cold dark night and never returned. The disappearance of Molly soon hit the headlines, and Sunderland police had a flood of offers to help them find Molly.

As they scoured the country looking for her, calls came in from all over saying that people had seen her at various railway stations across the country. However, nothing was to come of any of the so called sightings.

On the afternoon of Wednesday 12th October 1960, the police motor launch made a grisly find in the River Wear. As two police officers reached over to recover the body, an appalling smell hit them Then they realized that only the rotting torso and upper half of the leg remained. Police agreed that the body had been washed into the river by heavy rain. Indeed, floods were a possibility at the time.

The post mortem revealed it had been a woman between 25 and 50 years old and 5ft 3 inches tall. Indeed, she had been dead for a long time. Molly was 33 years old and 5ft 6 inches tall when she disappeared, could these remains have been Molly? A note from the inquest said the body could explain the disappearance of Molly, but proof would be impossible.

Moreover, inquires failed to find anyone else it could have been. They laid to rest the unidentified remains on Monday, 17th October 1960. So was that Molly’s remains or is she living out her life as a very happy healthy old woman**.

**At the time of writing this (2010), Molly would have been 94. Since we updated things in 2018, the hope of finding Missing Miss Molly are diminishing fast. Indeed, most people believe that Missing Miss Molly is dead and that her ghost haunts the Sunderland Empire Theatre. But what do you think?

Of course, we write this story in the hope that some information comes forward with more information. So, if you have anything to add to this mystery, make a comment below.

We also have the Sunderland Message Boards (SMB) in which you can create a new thread. Obviously our Sunderland Forum is a public platform for anyone, but please remember that our forums are ‘family friendly’. In other words, we don’t allow swearing etc.