Monkwearmouth lies to the north of the River Wear as we can see.

Firstly, Monkwearmouth is an area of Sunderland on the north side of the River Wear. It all began at the end of the seventh century because of a young nobleman named Benedict Biscop. To clarify, Biscop is the Patron Saint of Sunderland and was born in AD627 at the Royal Court of Northumbria.

Indeed, it was on his return from a pilgrimage to Rome that Biscop was given 15 square miles of land. It was King Ecgfrith of Northumbria who gave Biscop the land of course, as he was ruler. Moreover, this was the start of a movement which would help bring Christianity to the north of Saxon Britain.

In fact, the land at the mouth of the River Wear, was for Benedict Biscop to found a monastery there. As a result, the monastery, St Peter’s, in the name of the Archbishop Theodore of Canterbury, was complete in AD674. With this in mind, it is this monastery which defines the age of Sunderland. In other words, Sunderland was born then! 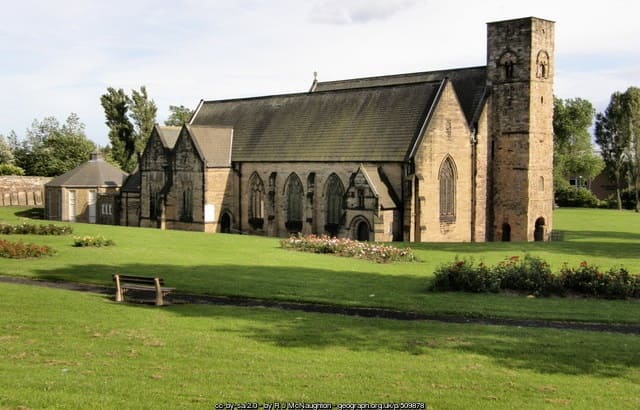 Of course, stonemasons and glass workers came from Gaul to help build the church. This was because in Anglo-Saxon England was still developing and these crafts had not become established here yet. However, Sunderland was to become very famous for stained glass and glassmaking in later years.

In 685, Benedict Biscop gained another strip of land from Ecgfrith on the south side of the river. Of course, many people think that this land, ‘sundered’ (meaning divided) from the main monastery gave Sunderland its name. Although nobody really knows!

Without doubt, the most famous person with a connection to Sunderland is Saint Bede. In fact, Bede’s family sent him to the Monkwearmouth monastery at the age of seven.

This was so that Benedict Biscop could educate Bede. Of course, at this age Bede did not know if he would become a monk or not. 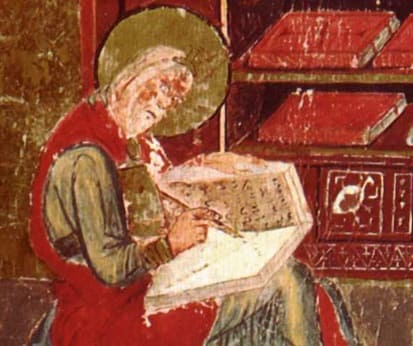 However, Bede went on to become one of the most important people in Europe at the time. In fact, such was his importance that he is better knows as ‘The Father of English History’. Moreover, the Bible was first translated into English by Bede right here in Sunderland!

When the monastery closed in 1536, it became known as St Peter’s Parish Church. However, Sunderland itself did not have the status of a parish until 1719. St Peter’s Church also went through extensive restoration and rebuilding in the 1870’s.

At this point its important to understand that St Peter’s Church is the twin of St Paul’s Church in Jarrow. However, St Paul’s Church is about seven years younger than St Peter’s. Be that as it may, there is hardly any of the original monastery to see on Wearside. Obviously, St Peter’s Church still stands, but there is more of the original monastery in Jarrow. So, be sure to take in both should you visit the area. This is because they both are very important churches in the Christian Religion.

Sunderland, as we know it, came of age because of St Peter’s Church in Monkwearmouth. Therefore, the City of Sunderland goes back to AD674. However, there were many settlements in the city prior to this dating back to prehistoric times, including Roman times. But, St Peter’s Church gives us a clear date from which to start our clock.

Monkwearmouth was one of the original three settlements that joined together to form Sunderland as we know it today. Obviously, the others being Old Sunderland and Bishopwearmouth.