To begin with, this is the story of the brutal deaths of three innocent children. Indeed, the parents discovered the dead children after returning from an evening out. So, let us look back to that terrible event in 1683, the Murder At Kirk Merrington. This article may be distressing, so please be aware of that.

Quiet teenager Andrew Mills was a 19 year old well, simple-minded farmhand. Andrew worked for John and Margaret Brass, a jolly fat couple who loved to eat and drink. They lived at Hill House, a farm in the parish of Merrington in County Durham, with the Brass’ 3 children. 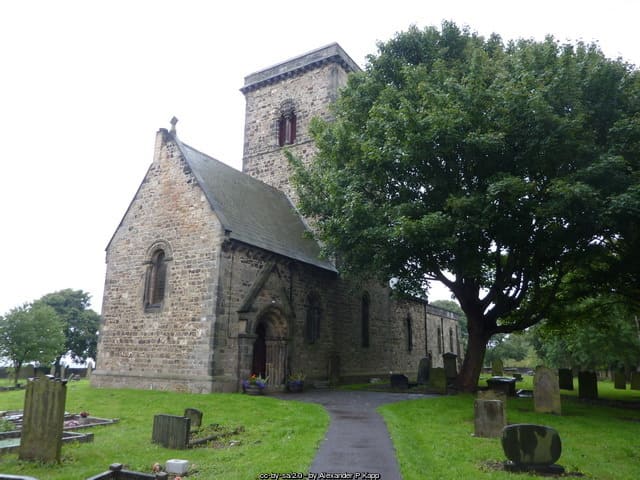 Jane 20, a beautiful girl with her dark hair and red lips. John 18 was a lazy, cheeky and liked to tease the farm workers especially Andrew. Then there was Elizabeth 11, a happy go lucky child who liked to play in the fields.

Andrew would work from dawn until dusk, lifting, carrying, moving vegetables and ploughing the fields. Andrews only friend seemed to be 11 year old Elizabeth, and she liked to play games with him. So they would often be together playing with Elizabeth’s toys and dolls or running after the ducks on the farm. However the winter of 1683 was to change their lives forever.

As darkness fell on the evening of 26th January Mr and Mrs Brass went on horseback to see their friends. Their eldest daughter Jane had become engaged to a rich handsome young man and the Brass’s wanted to celebrate. No one would know from then exactly what happened and certainly no one would live to tell the tale.

Records of the time said just before midnight Mr and Mrs Brass returned to Hill House. They then heard “the unearthly howling of dogs and the screeching of owls”. As Mr and Mrs Brass walked through the front door the sight that met them would torment them forever. In the shadows of one room they could see John and Jane both their heads all bloodied and battered. In another room lying halfway from under the bed lay Elizabeth, her head also bloodied and battered.

Troopers on a night march found a blood soaked Andrew wandering not far from the farm. Andrew was later to say he had chased the children around the house with an axe. The two eldest children had tried to hide in a bedroom. As the door had no lock Jane had pushed her arm through the handles. But Andrew with his bulky frame, had forced his way through the door breaking Jane’s arm. Andrew then went on to cave the brother and sisters head in with the axe.

The records of the time stated “The half witted creature gave no motive for his crimes beyond suggesting he had done it all at the suggestion of the Devil”. This according to Andrew had almost saved Elizabeth’s life. For when he found her, she pleaded for mercy. She promised him anything, sweets, toys even money if he spared her life.

Some of his liking for the young girl must have shown through as he left her alive. Andrew then went on to tell the troopers, “the Devil met me in the passage and a voice said Kill All, Kill All”. Documents recorded “The words so rung in his ears that he returned to the fatal bed chamber, dragged the poor child from below the bed and dashed out her brains”.

Andrew was tried, convicted and sentenced to death for the three murders and so, he was executed on 15th August, hung in chains on a common about a mile north of Ferryhill.

A monument (table grave) built a century later in Kirk Merrington Churchyard reads: “Here lie the bodies of John, Jane and Elizabeth, children of John and Margaret Bass who were murdered on January 28, 1683, by Andrew Mills, their father’s servant, for which he was executed and hung in chains”.
The inscription continues:
Reader, remember, sleeping
We were Slain;
And here we sleep till we must
Rise Again.
“Whoso sheddeth man’s blood, by man shall his
blood be shed.”
“Thou shalt do no murder.”

In 1887 an historian wrote about the Murder at Kirk Merrington: “Where an Andrew Mills of our time to murder a family and lay the blame on the Devil, there are not 12 men in England who would agree to hang the murderer. They would immediately vote him insane. Indeed, they would keep him from doing mischief to his fellow creatures during the rest of his natural life. Yet Andrew Mills, an account of his deeds and still more his fabled sufferings, is a name to conjure by in Durham even to this present day. Foolish mothers frighten children by mention of the long dead and half crazed creatures name”.

One such fabled suffering, according to legend said: “Day after day, as life ebbed fast and hunger grew keen, his cries of agony were heard for miles around and his life was prolonged by the kind offerings of a sweetheart who nightly fed him with milk through the iron cage in which his limbs were bound”.

So, did John torment Andrew Mills, was Mills insane, or was he just a murderer? Indeed, we’ll let you decide. The murder of the Brass’ children in Kirk Merrington was obviously a terrible tragedy that would be every parent’s nightmare of course. May those children rest in peace.

Wearside Online allows users to comment on the Murder at Kirk Merrington here. Moreover, you may even add another murder mystery from our area by filling in this form. Indeed, you can help us keep accurate documentation so that others may benefit.

Also, we have the massive Sunderland Message Boards (SMB) in which to create new threads about any local issue. The Sunderland Forum allows for social interaction between like-minded people in our region and beyond. So, pop over and create a post or two.