Side view of the new Sunderland bridge which will indeed span the River Wear from Pallion to Castletown. This project will also help regenerate the whole area.

In short, construction of the new Sunderland bridge over the River Wear is now well under way. There are major roadworks on both sides of the river and this will continue through 2016 and 2017.

The new Wear crossing is due to open in the spring of 2018. It will have two lanes of traffic in each direction with dedicated cycleways and footpaths of course. 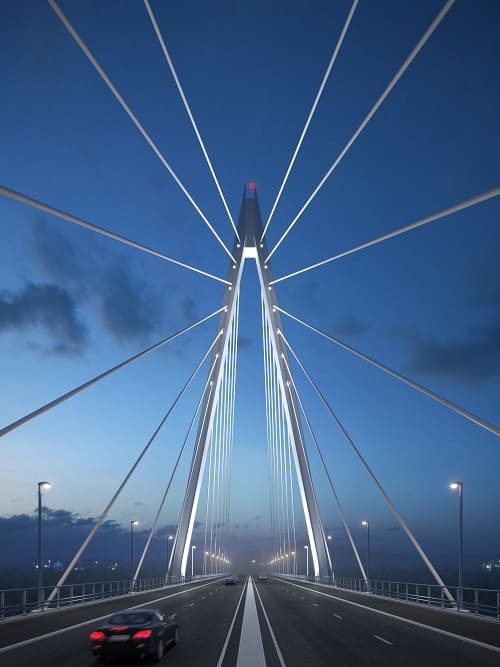 In effect, travellers around the Wessington Way area to the north of the river will see work taking place. Likewise, folk around the European Way and Pallion areas should also see early stages of the work. There are also electronic notices at key points warning of delays. All in all, these are essential works to create the roads to and from the bridge. While these approach roads are under construction, there will be severe delays for motorists. Indeed, this will affect those people travelling along the major road arteries close to the site.

The work is essential but the new River Wear bridge will make travelling across the city far more easier soon. In the meantime however, please expect major delays around the approach roads to and from the areas affected. It may be worthwhile setting off slightly earlier when passing these places.

Indeed, travellers recently suffered sever delays across the city with the council census. Both the Wearmouth Bridge and the Queen Alexandra Bridge had severe hold ups. The census lasted most of the day over both morning and afternoon peak periods to the annoyance of many people. Sunderland City Council say that because money was a grant from central government, the census was necessary. There is also a thread about this on the Sunderland Forum here.

Once the new Sunderland bridge is complete we should see a dramatic reduction in travelling times for certain routes. Indeed, there will be a dual carriageway from the A19 through to the City Centre and the Port of Sunderland.

Benefits Of The New Sunderland Bridge:

01) The creation of 6,000 jobs on the development sites along the way such as the old Vaux site.
02) It will also help with the regeneration of many parts of Sunderland.
03) The establishment of a faster public transport corridor from the Port to places such as Nissan. Of course there are other enterprise zones along the route.
04) Relieve congestion across the city, of course this includes less reliance on the Queen Alexandra Bridge.
05) Give cyclists a better, and indeed a safer route across the city.
06) Offering a link up with the Metro service at Pallion for people between the Castletown and Southwick areas. Thus, people will be able to walk over to the Pallion Metro Station.

All in all, the benefits of the new Sunderland Bridge are many. However, we may have to endure a few delays while travelling across the city in the short term. But, come Spring 2018, it will all be worth it.

Sunderland did not get its iconic bridge that was originally on the table. Indeed, that would have been the highest bridge in England at 590ft (180m). But after all those years of promise, we can now see the new River Wear crossing finally coming to fruition.

Indeed, this is an image of the Viking Horns Bridge that was scrapped.

01) It will be a three span cable-stayed bridge with an A-frame pylon rising to 105m (344ft).
02) The pylon will be twice as high as Gateshead’s Millennium Bridge and taller than Big Ben’s clock tower.
03) The Sunderland bridge will also weigh 3,100 tons.

To see a comparison with other landmarks in the UK, see the image below also:

In essence, the new Sunderland bridge (light blue) will be higher than the Big Ben Clock Tower.

To illustrate, here is an artists impression of the new bridge for Sunderland to be open in 2018: 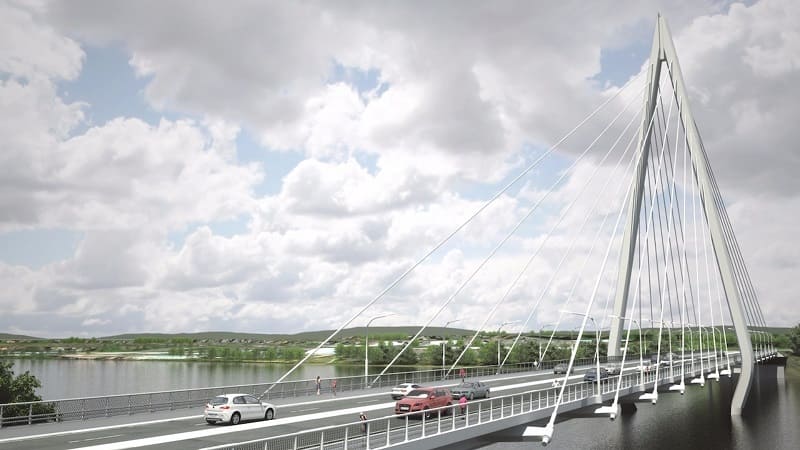 Also, see the map below showing the position of the new River Wear crossing and the approach roads: 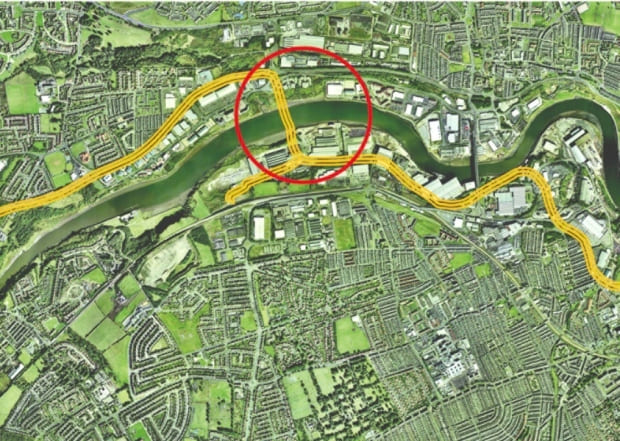 The council has a website for the new Wear bridge of course.

There is also a Wiki page for the new Sunderland bridge.

This video also shows the making of the new River Wear crossing.

After much consultation with business leaders in Sunderland, the new Wear Crossing now has an official name at last. In fact, as we see in the new information below, the name of Sunderland’s newest bridge is ‘Northern Spire’.