Moreover, football was in the blood because his father, Robert Carter, played for Southampton, Fulham and Port Vale. 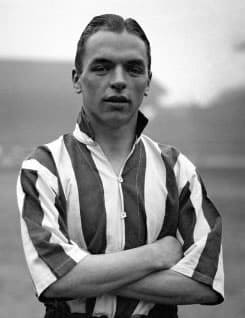 Raich’s mother and father ran the Ocean Queen Pub for a while to keep the pennies coming in. Of course, this was after Robert came back to Sunderland due to retirement from the game. In short, it was a serious head injury at Southampton Football Club that ended Robert’s footballing career. The head injury was so bad that it was responsible for Robert’s death on the 14th March 1928.

Being a widow in the days before the benefits system was tough, especially with three children to keep. However, an uncle helped the family to get by where possible. But, Raich soon began to be the family’s main financial provider. This was when he became a professional footballer at Sunderland in 1931. Two months before his 19th birthday, Raich played his first senior game for the club.

Raich Carter was obviously a winner from the start. Indeed, he already had four England caps at schoolboy level in the 1926-28 period. Of course, Sunderland AFC, ever watchful for local talent, signed him on amateur forms. This was following an unsuccessful trial for Leicester City, from which he earned a professional engagement. However, it was Leicester City who rejected Raich for being ‘too small’ standing at five feet, six inches.

By the age of 24 he had won all of the then top honours available in the English game. This, of course, includes International Caps, Inter-League, League, Championship and FA Cup winner’s medals. He also shone at cricket too, playing three times for Derbyshire in 1946. Later, he played cricket for Durham in the Minor Counties Championship.

Raich Carter played inside-right of course and was a wizard when it came to making and taking of goals. Indeed, he had many nicknames including ‘The Wizard of Dribble’. Moreover, he was self-confident and had an excellent footballing brain. He could also rip a defence to shreds and pass a ball through the eye of a needle. In the penalty box, even when he had two or three defenders on him, he could get a shot away.

Together with Stanley Matthews, England had a right-wing pair which was formidable. Stanley Matthews once said “Carter was a supreme entertainer who dodged, dribbled, twisted and turned, sending bewildered left-halves madly along false trails”.

His talent was so great, that had he been playing nowadays, only a handful of clubs could afford his services.

Of course, Raich Carter captained his home town club, Sunderland, to the league title in the 1935/36 season. Raich was the league’s joint top scorer with 31 goals during the title winning season. Then in 1937, he was the captain of Sunderland’s first FA Cup Final victory. As a matter of fact, he scored three goals in the cup run. Moreover, he scored a goal in the 3-1 final win over Preston North End.

Raich married a few days before the cup final. When the Queen presented him with the Cup she said, “That will make a fine wedding present”. So, she certainly done her homework there! 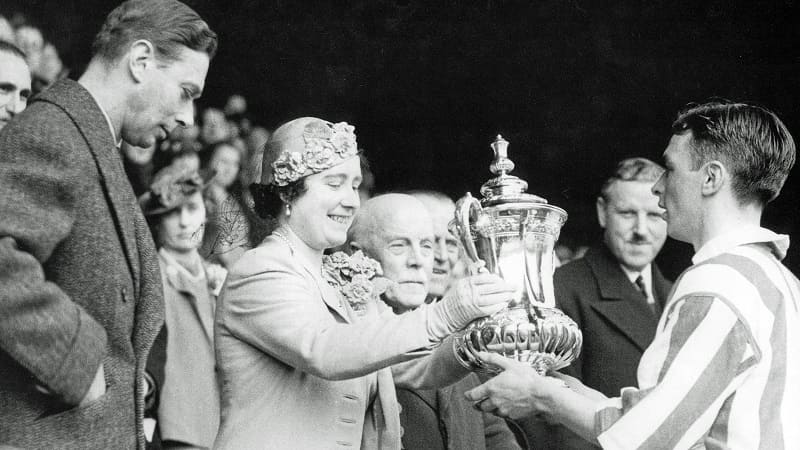 Raich Carter transferred to Derby County towards the end of the War where he played from 1945 to 1948. In this case, the transfer fee was £8,000. Derby was a club for whom he had been a guest player while on RAF service. Moreover, he led his new club to their first ever FA Cup victory in 1946. This then made Carter the only player to have won a Cup winner’s medal either side of the War.

Raich’s next move as Hull City’s player manager also produced a triumph. Indeed, he helped steer the club into Division Two via the 1948-49 Division Three (North) Championship. He also became a legend in Hull as elsewhere. The local papers coining of the ‘silver haired maestro’ tag striking a true and lasting chord. However, we mostly refer to Raich Carter as ‘The Silver Fox’. This is because his hair prematurely turned grey.

His departure from Hull in September 1951 left the club rudderless. However, after some persuasion, he came back as a player and the Tigers managed to win their battle against relegation. Then he left Hull in 1952. But he did play 9 times for Cork Athletic before hanging up his professional boots for good. All in all, Raich Carter won honours at all the clubs he played for.

It was a high standard to achieve in such a lengthy career but Raich Carter would have accepted no less. Indeed, he set himself high standards and expected the same from others. In other words, he was a true professional throughout his footballing career.

Raich was indeed a legend of the game either side of World War II. This was not only for Sunderland, but also with England, Derby County and as player manager of Hull City. However, the war years prevented him from playing many more games for his country. This was because most football ceased between 1939 and 1945.

A leisure centre, named in his honour, now stands in his home town of Sunderland. Indeed, it was ex-footballer, Trevor Brooking, who officially opened the Raich Carter Sports Centre. The sports centre is loosely on the site of Sunderland’s first football pitch. In fact, it is just a corner kick away from where Raich Carter used to live in Hendon. So, this stands as a mark of his lasting fame, more than 60 years after his last game for Sunderland. 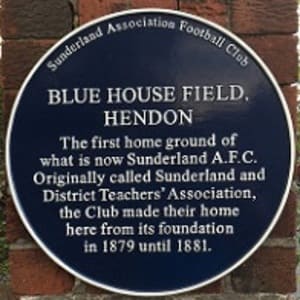 All in all, more than 60 guests attended the opening in October 2001. This obviously includes Raich’s widow, Mrs Patricia Carter and other family members. There, of course, they saw the unveiling of a commemorative plaque at Sunderland’s newest multi-purpose sports centre. Just to point out that in Hull, the naming of Raich Carter Way is in honour of the legend.

When Hull City opened their new KC Stadium in December 2002, it was only fitting for Hull to play Sunderland. Moreover, they played for the Raich Carter Trophy.

Even though a score draw would have been appropriate, the end result was Hull City AFC 1-0 Sunderland AFC.

So, perhaps in the future, Sunderland may have a chance to win it back for Raich’s home city. 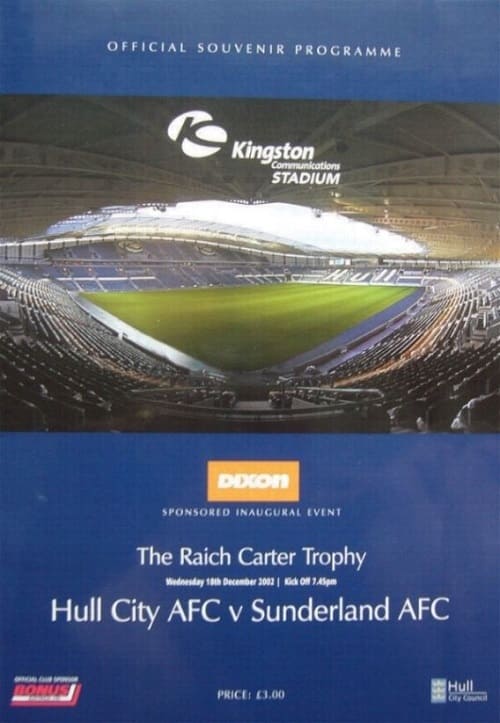 Of course, drive past the Blue House Pub in Hendon, Sunderland and you will see the Silver Fox. This is because there is a massive mural of Raich Carter on the side of the pub. Painted by Frank Styles, Raich’s Mural proudly looks down on his home town. His striking image obviously attracts the attention of everyone who passes. This is regardless of whether they have an interest in football or not! 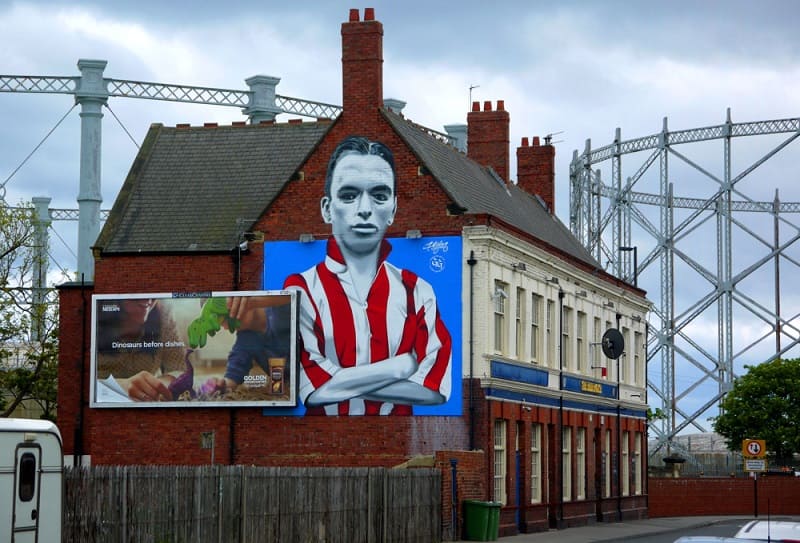 Raich Carter was indeed an aristocrat of the football world. So highly regarded was this man that even his peers, often referred to him as ‘The Maestro’. One of the most successful and happiest times of the Sunderland AFC’s history is because of Raich Carter. Moreover, Carter, whose hair was silver but whose talent was 24 carat gold, helped give Sunderland a glittering history.

Horatio Stratton Carter not only had the nickname of The Maestro, but also Wizard of Dribble and The Silver Fox. However, Raich Carter also had another claim to fame. Indeed it turns out that Raich’s great, great, great uncle was Captain James Cook. So, together with Raich’s self-confidence and high standards, steering a steady ship was in the blood!