This page is about Roker Park in Sunderland

Firstly, Roker Park is a magnificent Victorian style recreational park opening to the public on 23rd June 1880. Indeed, the park and the nearby seaside resort of Roker are now a very popular tourist attraction. 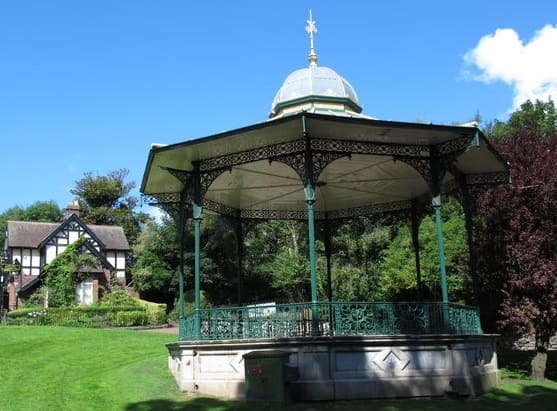 However, Roker Park attracted very little attention until the late 19th Century. Indeed, the earliest development was the building of Roker Terrace along the sea front on the cliff tops. This was in the 1840’s and those buildings are still standing. Roker still did not have the classification as a holiday resort until 1880. This was following the opening of Roker Park. 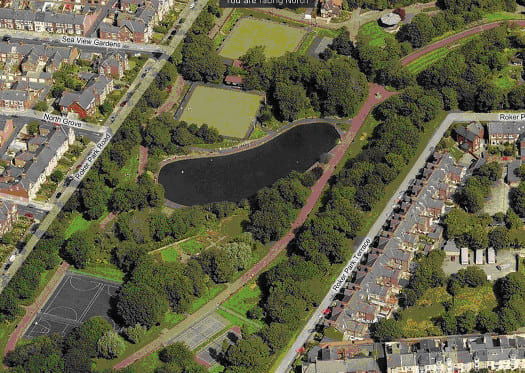 The land for the park was indeed a donation by Sir Hedworth Williamson and the Church Commissioners. Of course, this was for the development based upon the Roker Ravine in 1880. However, there was a condition to the donation and that was the ‘Commission’ build a bridge to span the ravine. This was so that Sir Hedworth Williamson’s land to the North of the area could be open for development.

The park still retains its Victorian style through to the present day. Moreover, it provides visitors with an array of interesting features and attractions. These include, Victorian Street Lamps, Display Gardens, Floral Displays, Children’s Play Parks and Model Railways etc. Obviously, a programme of events and entertainments are operate during the summer season. But, much happens during the autumn too. In particular, the Sunderland Illuminations which focus on the park itself. 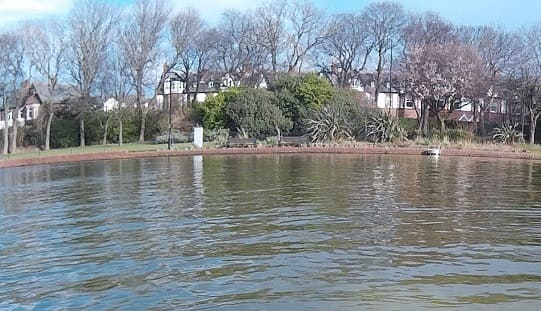 Indeed, there is also an large ornamental lake in the centre of the park which is a focal point. Of course, many people often use the lake for their model boats. However, you mostly see happy children fishing with their nets on a rod.
Obviously there are many seats around the lake. Indeed, in the early days, the King gave a presentation of four white swans especially for the Roker Park lake. But nowadays, swans rarely visit the lake. Of course, many seabirds and mallards are permanently resident. 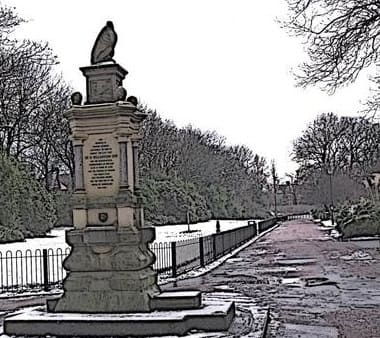 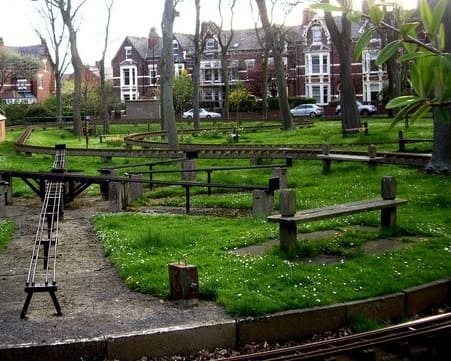 Soon after the end of World War II, saw the construction of a model train and tram track.

This was by the local model engineering society and they were very popular indeed.

Nowadays, the narrow gauge rail track, in the north-west corner of the park is still in use. Indeed, the 1970’s construction is often open to the public to ride on certain days.

The bandstand is at the lower promenade entrance, in other words, close to the sea front. Visitors to the park also enjoyed daily events and attractions during the summer season. 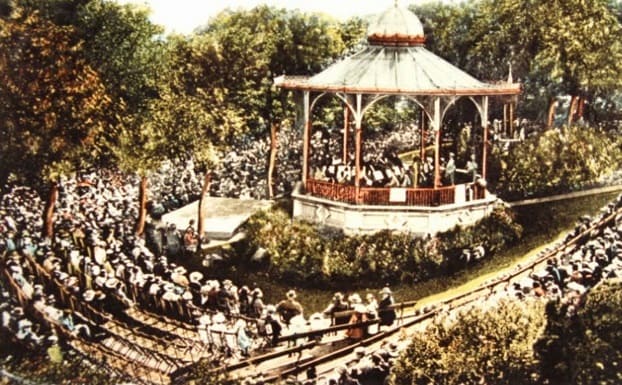 Particularly popular were the performances on the bandstand and the peirrot show. Obviously, both attracted large audiences. In fact, the bandstand area still attracts a large number of people when events take place there. 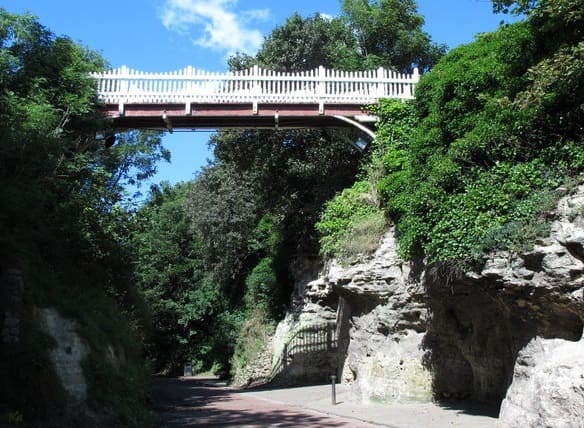 The obvious attraction of Roker during the Victorian Era was its coastal location with the promenades and beaches.

Then, winding from the beach between limestone cliffs is a wide footpath. Of course, this leads to the recreational grounds of Roker Park. Indeed, the path is a deep ravine that takes visitors towards the centre of the park. Passing over the ravine is a wooden footbridge which is accessible by climbing the steps close by.

On the south side of the Roker Ravine is a large cave, but it is not open to the public now. In fact, the cave has the name of Spottee’s Hole or Monk’s Hole. Tradition has it that this formed the entrance to an underground passage. People believe it leads to St Peters Church, Monkwearmouth, hence the latter name. 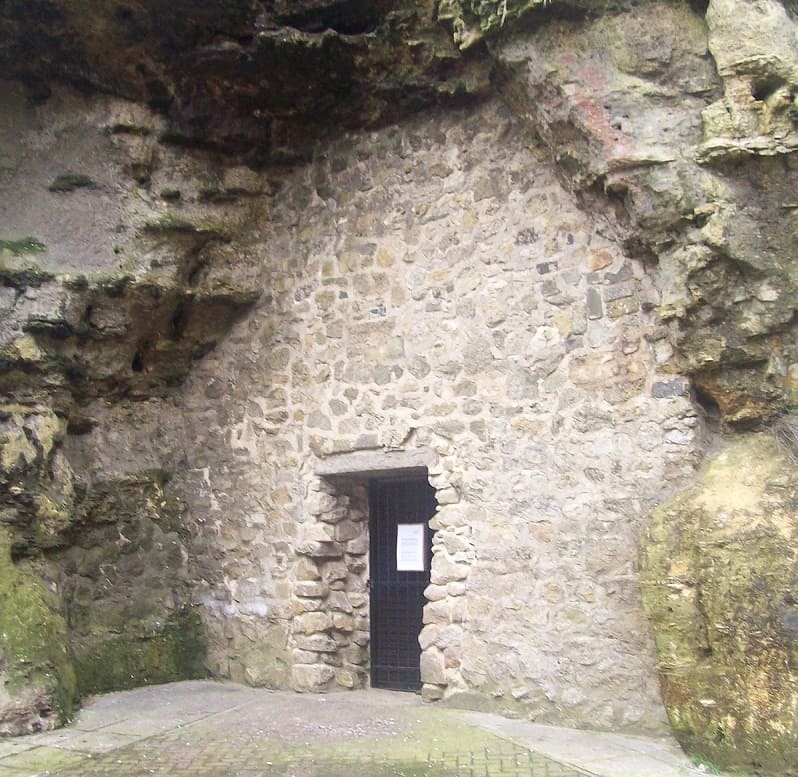 However, the name “Spottee” comes from a poor foreign sailor who was unable to speak English. But, he managed to pick up a precarious living in the neighbourhood. It was his multi-coloured spotty garments got him the name. Because he could not converse with the locals, many thought he was a lunatic. Indeed, The Bishoprick Garland refers to Spottee as such.

Furthermore, a long time ago, many people believe that three local people explored the cave for some considerable distance. However, when the cave came under examination in 1870, there was no trace of the passage. But some still believe the passage exists and that it was an escape route from St Peters Church in Monkwearmouth.

Of course, as usual with recreational parks, there is an abundance of floral displays. There are many ancient trees and the park has many kinds of shrubs. Together with various wildlife including squirrels, wildfowl and other birds, Roker park is ideal for a stroll. In fact, the recreational park is very large and is often in use for this type of activity by many people.

Some of the other features of Roker Park include bowling greens and tennis courts, of course. Indeed, there is even some basketball courts too. Then there are the children’s play areas off Side Cliff Road. So, many parents park here to allow their kids to play on the apparatus and sand features.

Generally speaking, as part of the annual Sunderland Illuminations, Roker Park became a central hub. Although the attractions extend along into Seaburn, Roker Park is the focal point. Due to its sheer size and flexibility, the recreational park has a new lease of life during this period. As well as the usual lights, there is also lights with various themes. Obviously, the most popular being Alice in Wonderland. So, when you visit Sunderland Illuminations, ensure that Roker Park is on the agenda.

What are your memories of Roker Park in Sunderland? Let us know in the comments section below. Alternatively you could use our massive Sunderland Message Boards (SMB). The Sunderland Forum is a great place to socially interact with other Wearsiders, so pop over and create a post.

SD14 on the Boating Lake

Finally, since Sunderland was the biggest town in the world, here we have a suitable video. This is of an SD14 ship on the recreational lake in the park.