In short, Ryhope Village has one of the finest monuments to Victorian engineering ability in the North East of England. Of course, we are referring to the Ryhope Engines Museum in Sunderland which opened in 1868. Obviously, this water pumping station was responsible for supplying water to the Wearside area.

The pumping machinery still works, but basically the place is a museum now. Visitors can take a look back in time at this Victorian marvel.

Of course, the first water company in Sunderland was at Bishopwearmouth in 1824. The engineer was Thomas Hawksley, whose work became renowned throughout Victorian Britain. Indeed, Hawksley was responsible for around 120 water projects.

His work also included the design for the Ryhope Pumping Station which is now a scheduled monument. Hawksley was obviously the most appropriate engineer for the job. This is because he was the first person to design an ‘always on’ pressurised water distribution system.

To begin with, in the 1800’s, water supplies came from places such as rivers, surface reservoirs, wells and natural springs. But, demand for water soon began to outstrip supply. This was due to the industrial revolution and rapid population growth in Sunderland.

Not only did the mining industry need reliable quantities of water, but so too did the new industries. However, because the cholera epidemic kept reoccurring up to the mid 1800’s, authorities established a link with poor water quality. This discovery brought with it many health reforms of course. As a result, the Sunderland and South Shields Water Company came into existence in 1852.

In effect, there was a slight urgency to get a reliable, clean water supply on tap quickly. Because of this, pressure on the new water company to deliver this vital commodity was too much at times. With this in mind, in 1864, four acres of land at Ryhope became the site for a new water pumping station. The total cost of the station, together with the acquisition of the land, was £58,416, including £9,000 for the engines. 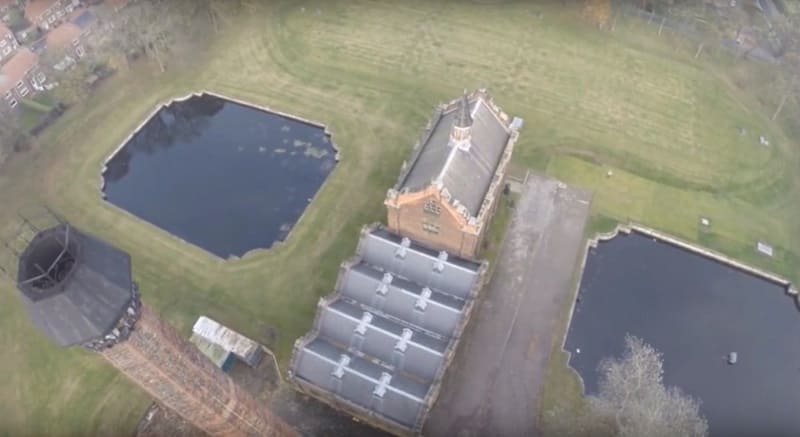 For the most part, the construction of Ryhope Pumping Station was straightforward. But, it had its problems.

For example, the building itself and the pump engines were an integrated structure. 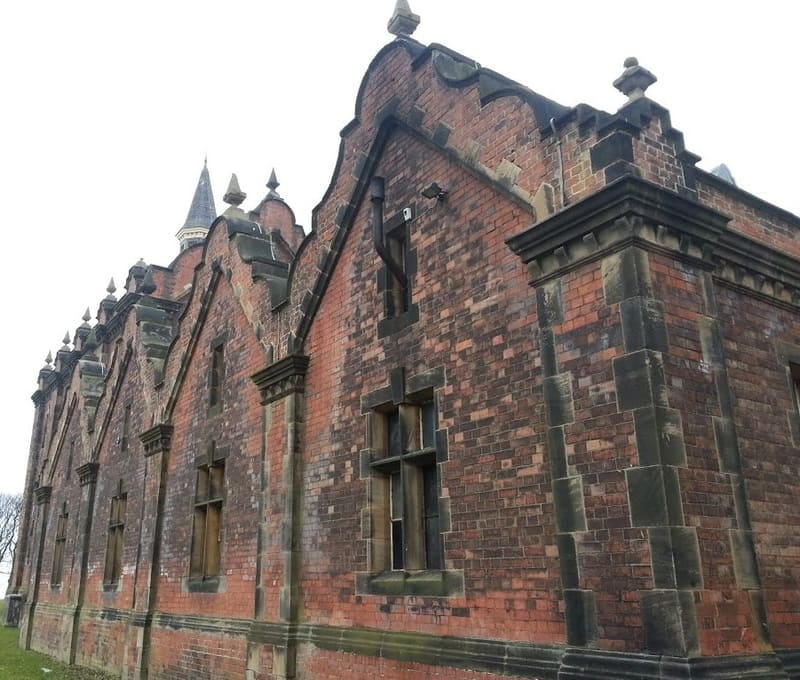 However, the inspirational Victorians were always going to make an effort to overcome all the complications. The construction of the Gothic style building obviously made good use of red bond bricks. But it does use ashlar dressings around the windows and doorways with good effect. 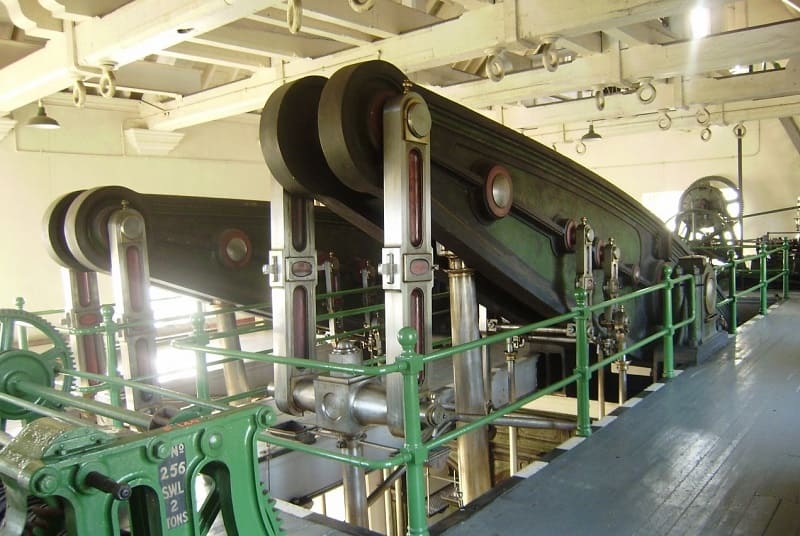 In short, there are two identical double-acting compound rotative beam engines in the water pumping station. Each beam weighs 22 tons, while each flywheel weighs 18 tons.

Indeed, the water pumping engines totally fill the building from top to bottom.

R & W Hawthorn of Newcastle supplied both engines which still exist today. However, in 1908, three Lancashire boilers which use 63.5kg of coal per hour replaced the original six Cornish boilers. 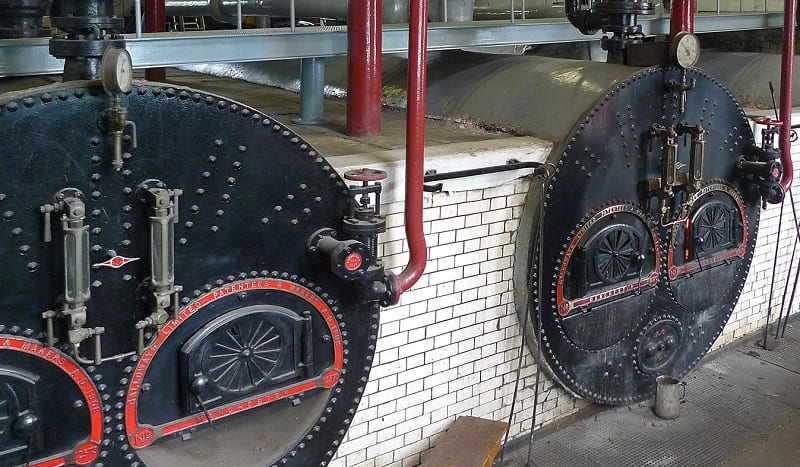 Since they didn’t treat the water in any way, hygiene was very important. Indeed, the workers were subject to regular reminders about cleanliness. So, anyone caught coughing or spitting into the wells would get their marching orders.

Ryhope Pumping Station operated for around 100 years until its demise in 1967. This was because of a number of reasons. Firstly, the local surface pumping stations were extracting too much water and levels were dropping below sea level. Of course, this may have allowed salt water contamination. Secondly, Ryhope was giving ‘hard water’ while the Derwent Reservoir and Kielder Reservoir were supplying cheaper ‘soft water’. The latter is not only better for the heart, but for the laundry as well!

Now that we have the history behind us, what does the Ryhope Engines Museum in Sunderland have on offer? Of course, on approach to the attraction, visitors see the massive brick chimney first. Then, at the site, the Gothic-style Victorian buildings give visitors a glimpse of what the industrial revolution had to offer. 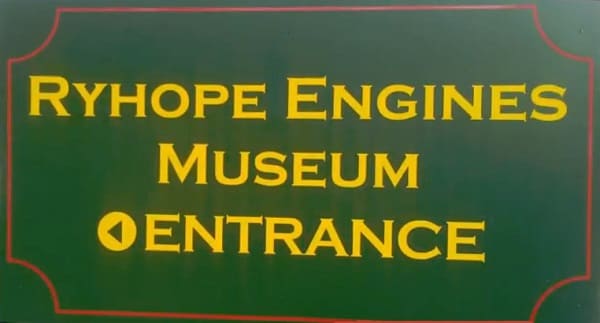 Of course, inside the Ryhope Engines Museum is where the meaty bit is.

This is because it still contains many original features.

Obviously, the two identical double-acting compound rotative beam engines, when in full steam, are a sight to remember.

Two Lancashire boilers are still in operation. But if you haven’t got a head for heights, don’t look into the well which is 250 feet deep. However, they have a grill over them and are worth viewing if you have the stomach for it. There is also a replica plumber’s shop, a blacksmith’s forge and numerous other waterworks memorabilia. When you have had enough, take a welcome break in the Gatehouse Tea Rooms.

All in all, Ryhope Engines Museum is an ideal day out for the whole family. Although Northumbrian Water still own the site, volunteers from Ryhope Engines Trust keep the place alive. Thanks to those dedicated people, admittance is free.

Since it wouldn’t be appropriate to run the machinery constantly, Ryhope Engines Museum only open occasionally to the public. When in steam, the museum opens between 11.00 – 16.00. However, the museum opens as a static exhibit every Sunday afternoon between 2pm and 5pm. But this is only from Easter until the end of December.

Here is an interesting video of an open day at the museum from 2013:

Wearside Online is proud to publish interesting articles from and around the local area here in the north east. Have you any other interesting places you would like us to feature? In fact, why not submit an article yourself, just fill in this form.

We also have a very active local community forum for better social interaction and we are ‘family friendly’ too. So, pay the Sunderland Forum a visit and start a new thread about any local issue. The Sunderland Message Boards (SMB) are a great way to give your opinions about anything under the sun.