Scotland Decides – My View From Wearside

To begin with, I write this article because I love Scotland. Indeed, Scotland is not too far away from where I live in the the north east of England. The result of the independence referendum could also have an impact upon the north of England. Moreover, I am English first and British second, the loss of Scotland to me would be so emotionally draining. So, this is my view of the Scottish referendum and the fall out from it – Scotland decides! 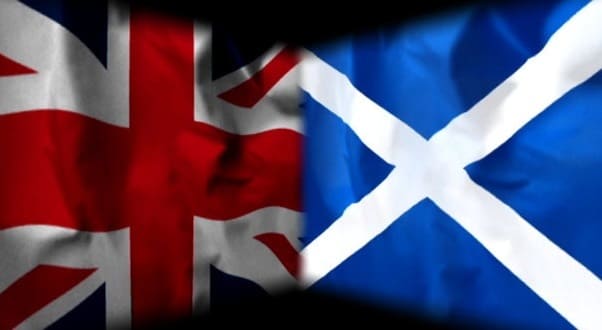 Scotland decides – the Union Jack and the Saltire stand together. Obviously, the referendum in Scotland in September 2014 has shown that the Scottish people have rejected independence.

To begin with, over three and a half centuries ago, England and Scotland were separate entities. Indeed, there were conflicts between the two countries. However, as time moved on, the relationship between England and Scotland improved. So much so, that the two countries joined together and formed a union. The marriage between England, Scotland, Wales and Ireland became one of the most successful alliances the world has ever seen.

In fact, the British Empire was to become the biggest empire ever. It was the English, Scottish, Irish and Welsh who achieved so much under the same flag. Obviously, the Union Jack or Union Flag, fuse together the flags of three individual territories. This is what we call Great Britain or the United Kingdom. It was and still is the most easily recognised and respected flag in the world.

Obviously, the British Empire gradually shrunk as the colonies grew into maturity. Nowadays, Britain still has a few dependencies around the world, The Falkland Islands for instance.

On the whole, Scotland has always played a major role in the British Empire. In fact, she was always hungry for action and gave everything in the name of democracy. Britain fought two world wars and have fought off both fascism and Nazism. Also, many English, Scottish, Irish and Welsh suffered in action. Great Britain, while united, have always proved that they can deal with anything thrown at it.

Last century, during the seventies and eighties and we saw the ugly rise of regional nationalism in the UK. Indeed, this was with all the countries that have achieved so much under the Union Jack. However, Scotland had a new political movement that was to grow into a monster. This was with the ultimate aim of leaving the union. They got on with their filth without question, unlike other nationalist parties. Indeed, parties such as the British National Party (BNP) and the National Front (NF) came under scrutiny.

Additionally, many of those involved are guilty of stirring up as much anti-English sentiment and hatred. They do this in a very clever and veiled manner. Furthermore, these people managed to gain enough votes in the ballot box to grab enough political clout. Then they went on to call a referendum for independence. In the light of this, an agreement to grant a referendum came their way.

To clarify, after two years of waiting, the referendum happened on the 18th of September 2014. There was one single question on the ballot paper: “Should Scotland be an independent country”. Significantly, for the first time in centuries, the SNP could have broke up the friendship of the union. Indeed, this would have split the UK for ever. One single vote could have swung it!

The BBC gave so much attention to the “yes” campaign and the SNP. The television news only showed the ‘yes’ banners, at least that was the illusion. On balance, the result was a win for the separatists, such was the coverage! However, the polls were giving a different message! Also, many of those who took over the streets while shouting loudest are guilty of mass intimidation. The evidence is there for all to see. 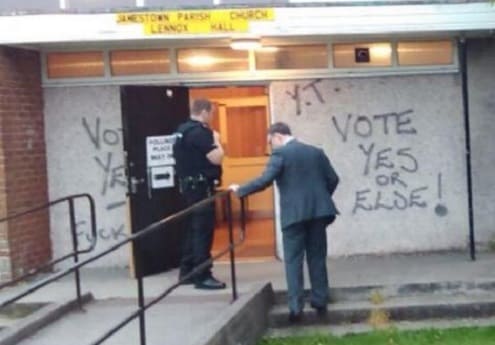 Scotland decides. Certain members of the “Yes” campaign should be ashamed of themselves for encouraging mass intimidation in the Scottish Independence Referendum. However, the idiots failed to disrupt democracy. The Scottish people indeed saw through the Marxist agenda.

In any event, as the results started to trickle in well after midnight, there was big hope for the union. Indeed, Clackmannanshire was first to declare, and they rejected independence. Furthermore, Shetland and Orkney come in with a result for the no camp. Then the yes campaigners started to realise that perhaps they were in for a poor night. The Better Together camp were always confident and the silent majority had spoke.

Generally speaking, the Marxists and Communists who stirred up hatred on the streets, stood defeated and resolutely too. Consequently, the results were 2,001,926 ‘No’ votes to 1,617,989 ‘Yes’ votes. As a result, Scotland rejected independence by 55% to 45%. The violent left-wingers also began to lick their wounds. The United Kingdom survived and the leader of the SNP stood down.

By and large, the SNP wanted independence from the UK. However, they want to be in the European Union not the union we have all been in for centuries. They wanted their laws to come from the EU, how stupid is that? Basically, the SNP are anti-England and full of hatred.

Together is the only way forward

Where there was not too much of a problem in Scotland before, a can of worms has opened now. Henceforth, Scotland has become split down the middle in the most cruellest of ways. This is because of the egotism of a few, not to mention the blatant anti-English racists. Friendships and families have broken up because of this referendum.

As I write this article I see the Union Jacks back on the streets and a few skirmishes so far. It’s not surprising, since those with Britain at heart, could have found themselves living outside Britain. Indeed, there was a lot at stake for the British people in Scotland.

One can only hope that the Scottish people can pull back together once again. Then realise that those responsible for this split should be to blame and vote against them. To explain, they promised the earth to the proud Scots. Specifically, they tried to convince the Scottish people that there would be nothing to worry about by going independent. However, what they never told the people was how they would fulfil their promises. Obviously, that is because they couldn’t.

These separatists only wanted more power, to save their jobs and split up the UK. However, in an uncertain world, these very same people are willing to ruin their own country. Independence, would never work for Scotland in the way these people proposed. Indeed, Scotland is remote and have depleting oil reserves. Moreover, the oil reserves are not enough to sustain the standard of living for the Scottish population. Indeed, look at Venezuela which has has the world’s highest oil reserves. There, the population in Venezuela is suffering unbelievable poverty and even starvation.

They may be back again

It is important to realize that the Marxists and Communists will rear their ugly heads again in Scotland if unchallenged. On the whole, they offer false promises as proved in the run up to the referendum. Indeed, we all remember when they had no answers to anything in their interviews.

They also promised the earth and pulled down the rest of Britain in doing so. Of course, common sense prevailed and the Scots could see through all the distractions and lies. The Scottish people voted against independence and remain Scottish but within the United Kingdom.

There is a word for those who disrupt a country like this, indeed that word is traitor. Obviously, that is one who commits treason. So, let us work together and help get rid of these treasonous people. Generally speaking, they want to sacrifice the union and the friendship that has been in existence for over 350 years. But, more alarmingly, they wanted closer ties with Johnny Foreigner and even let others rule them!

Just like I am English and British then the people of Scotland are Scottish and British. Obviously, this is a unique identity that most of us are very proud of. Long may that arrangement continue.

Bless you Scotland and bless Great Britain also. Scotland decides and of course I am proud of them north of the border. 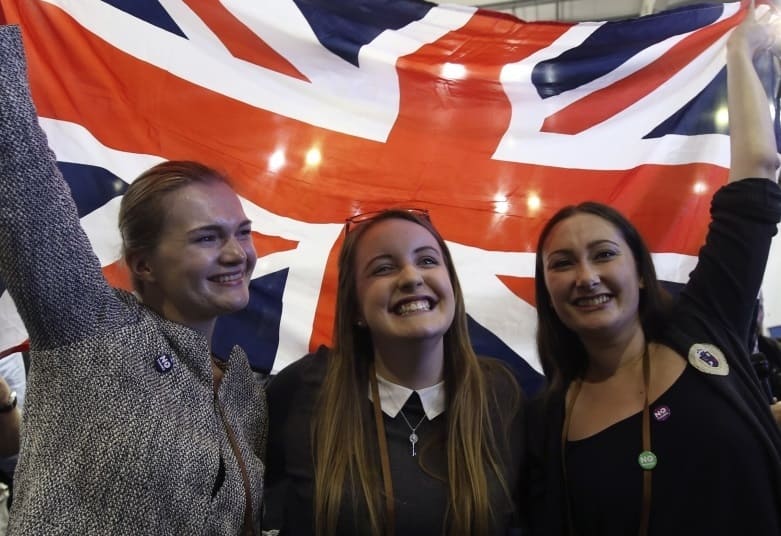 Scotland decides. Three young females are also happy that Scotland will remain within the United Kingdom. Furthermore, it is time to heal the split within Scotland caused by those who have their own agenda. We all know there is a job to do but we know its Better Together.

You may make a comment about this article in the section below. But we also have the Sunderland Forum in which to create a new thread on this subject.