To begin with, let us take a look back at the glory days of Sunderland Cinemas when they were numerous. Indeed, the cinema industry was booming but why did they all disappear?

On the site once occupied by the Olympia Pleasuredrome, there now stands what was once one of the biggest and most luxurious cinemas in Sunderland’s history, the new cinema in Holmeside called Black’s Regal. 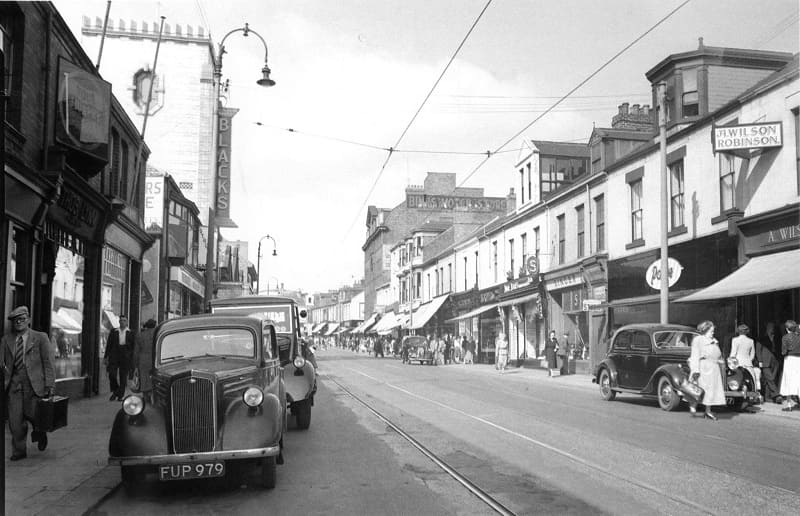 The designers were architects, Gray and Evans. Local builders, AJ Rankin, constructed the cinema at a cost of £100,000. It had the most up to date projection equipment and more than 60 staff with seating for 2,500 people.

Alfred and Edward Black were the managing directors with Roland Jennings MP being the chairman. The Regal cinema opened on Easter Monday 28th March 1932. The opening ceremony performed by mayor, Alderman EH Brown and there was a large gathering crowd.

The first program featured Laurel and Hardy in One Good Turn, the Paramount News and Fisherman’s Paradise. The first film that people saw at the Regal was Out Of The Blue starring Gene Garrard and Jessie Mathews. The organist was Arnold Eagle who took the name, ‘Eagle of the Regal’. 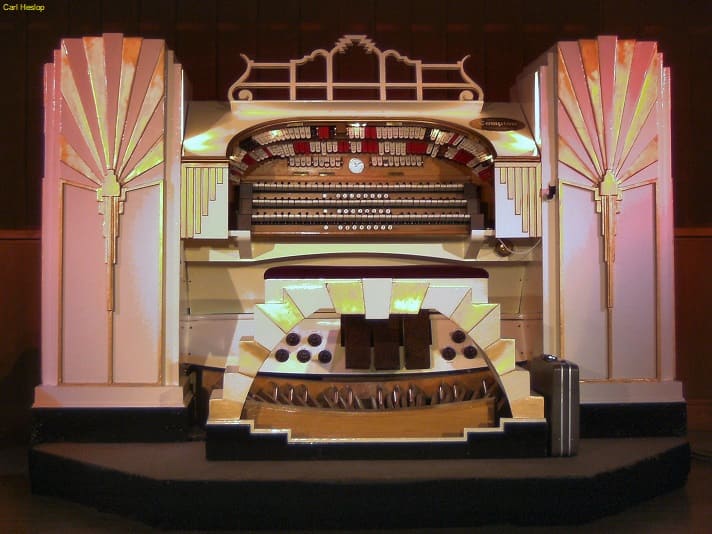 Some believe that it was his design for the Regal’s mighty 3Manual/9Ranks Compton organ too.

That organ is now at Ryhope Community Centre under the care of the Sunderland Theatre Organ Preservation Society.

The Regal continued to show extravagant stage shows until around 1945. Obviously, wartime Sunday concerts were popular with people of Sunderland.

The Rank Organization took over the Blacks in 1959, when the Regal became the Odeon. The seating capacity went down by 300. In 1964, they closed the front stalls entrance in Park Lane.

The Odeon closed on 8th February 1975 for conversion to three screens. 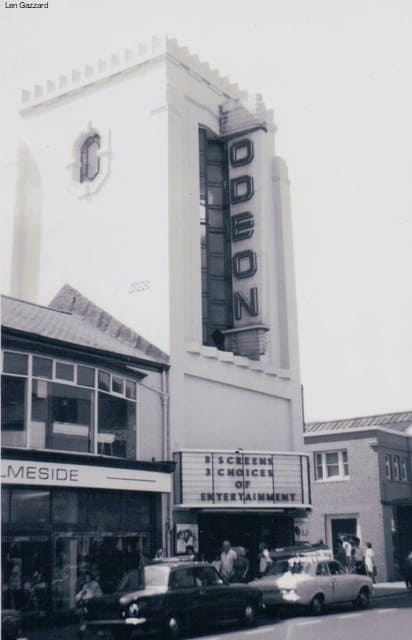 The last film shown then was James Bond The Man With The Golden Gun starring Roger Moore. It reopened on 9th March 1975 as the Odeon Film Centre with screen one showing The Taking Of Pelham 123, screen two, The Mad Adventures of Rabbi Jacob, and screen three, The Odessa File.

On Sunday 28th March 1982 there was a special 50th anniversary concert. Three months later the Odeon showed it’s last three films due to the announcement that the Odeon was to become a bingo hall. On the 26th June 1982 the last films shown were; screen one, One Flew Over The Cuckoo’s Nest, screen two, Star Wars and The Empire Strikes Back and screen three, Mary Millington’s True Blue Confessions. 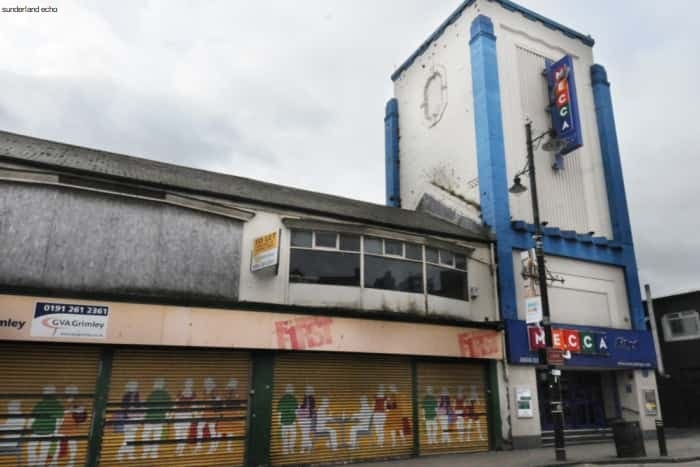 The building, closed for a few years but then re-opened as the Top-Rank Bingo Club, Indeed it remains in use today as the Mecca Bingo. The image shows the Mecca in a bad light.

On the site of a former cattle market in Holmeside, they built the Ritz cinema, owned by Union Cinemas. It was luxurious with its with deep pile carpets and chandeliers. The Ritz opened on 1st March 1937 showing Swing Time starring Fred Astaire and Ginger Rogers.

In October 1942, for the first time in Sunderland, they screened Gone With The Wind. Indeed, this lasted a record breaking six weeks. The early sixties saw a takeover of Union Cinemas by Associated British Cinemas. Then, the Ritz became the ABC with a seating capacity of 1500.

We saw another change in 1974 when EMI took over ABC. They converted it to a two screen cinema and renamed it, the Cannon. The seating capacity reduced to 762. Over the next twenty years saw the introduction of no smoking in the cinemas. Also, easy access to hired videos started showing a marked reduction in cinema audiences. The late 1990’s sadly saw the closure of the Cannon cinema also.

Nowadays the building is a live music and events venue called The Point. So, here is a collection of images as the building evolved – Sunderland Cinemas: 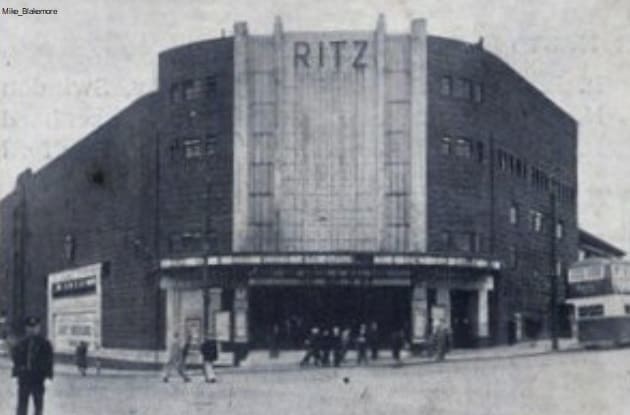 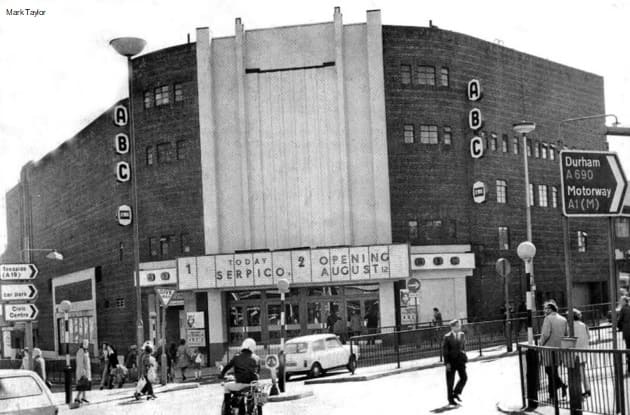 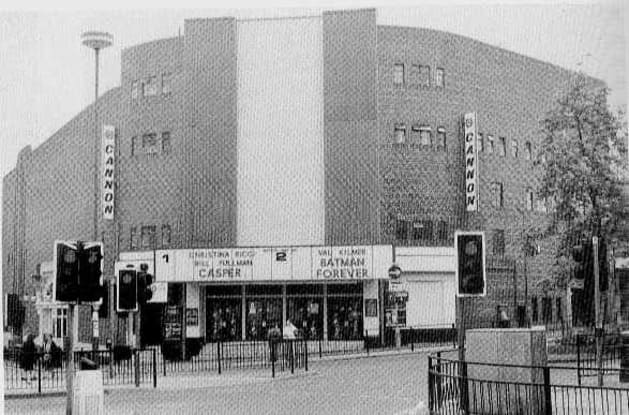 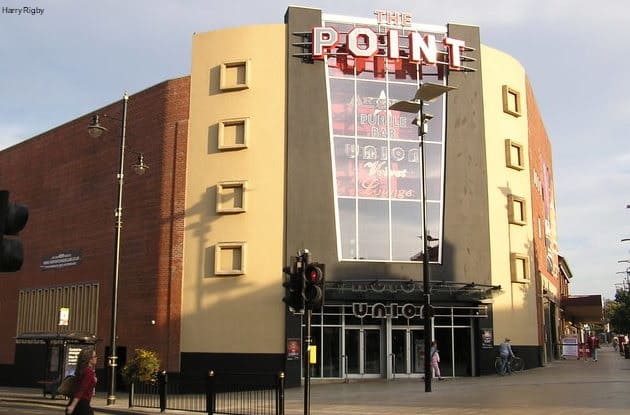 ** Just to point out that in 1896, The Victoria Hall was the first public hall to show ‘moving pictures’ in Sunderland.

So, what are your memories of Sunderland Cinemas? Indeed, you can tell us here by leaving a comment in the box below.

Alternatively, Wearside Online operates the Massive Sunderland Message Boards (SMB), so you may like to create a post there. The Sunderland Forum is a great way to socially interact with other locals.

One Response to Sunderland Cinemas