Here, we take a brief look at the history of Sunderland Coal Mining industry. To begin with, life was tough down the pits with miners at the coal face working in extreme conditions. But as we shall see, reforms were necessary, especially since many coal miners were children!

Prior to the industrial revolution, timber was the primary source of energy for most, of course. However, in the 14th century, as forests began to deplete, coal mining grew in economic importance. Indeed, coal mines spread out from the banks of the River Wear and into the surrounding countryside.

By the 1600’s, shafts to the shallow seams to create ‘bell’ pits became commonplace. But, they only worked only as far as ventilation would allow. However, by the 17th and 18th centuries, mechanical pumping and primitive ventilation systems brought further development. 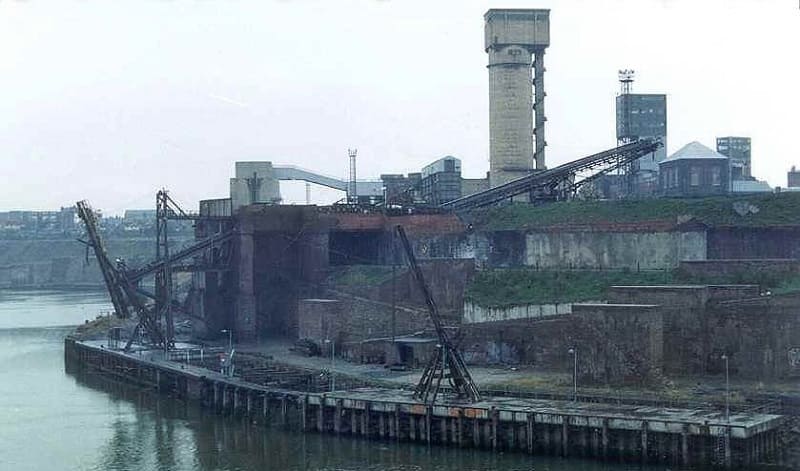 By the early 19th century, steam power allowed for the creation of deeper pits. Hetton Colliery, run by the Hetton Coal Company in 1820, began to breakthrough a deep layer of magnesium limestone. Then, 19 months after sinking began, they reached what they were after, a coal vein. Other pits, including Monkwearmouth, were also digging deeper. Indeed, in one Royal Commission report, the claim was that the Monkwearmouth Pit was the deepest coal mine in the world.

The story of our local miners is one of courage, comradeship, danger, hardship and spirit. Indeed, they were dependant on each other for their lives. On many occasions fathers or older brother would also carry the kids to the pits through the dark dingy streets. Moreover, some of the kids working as trapper boys were only 5 or 6 years old.

It is hard to imagine nowadays how children were allowed to be employed in the coal mining industry. But, the fact is they were, and in terrible conditions too. The coal mines were dark, filthy and very dangerous. Also, the coal dust would damage the workers’ lungs, especially in the developing children.

Trapper boys opened and closed doorways along the pits’ underground roads. This was the least arduous work, but the most solitary and indeed monotonous as well.

However, these children were necessary and helped with the ventilation of the colliery. Their trapdoors controlled the flow air. It was a crude system, of course. 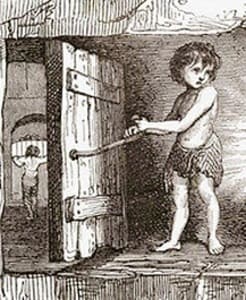 But the mine owners believed that it would prevent explosions due to a build up of noxious gasses.

Several major explosions in the 19th century were due to the trappers falling asleep or neglect. Although the system of trap doors was almost ineffectual to begin with, trappers still got the blame.

Trappers earned about 5/- (25p) per week and a 16 hour day was normal for these children. They were up at 3am six days a week to go to work, home for supper and then to bed.

Infants made up one fifth of the workforce in Sunderland pits. Moreover, about 15% of Monkwearmouth labour force was under 13 years old. This is because children were cheap to employ and could save a man’s wages for the owner. Then again families lived in pit houses owned by the corporations.

So, if the father died, they would lose their home unless his children had a job in the mine. There was no legislation to protect the children working in pits in those days of course. Furthermore, even by the standards of the 19th century, the conditions were horrendous.

Child miners were becoming a major concern when a Royal Commissions inspector John Roby Leifchild started an investigation. He found one child aged 7 years old who was the breadwinner of his family down Wearmouth pit. The kid had been at work in the pit the day his father died because of an explosion. He told the inspector he felt the blast “like a heavy wind and it blew all the candles out”. The memory obviously still troubled him.

Mr Liefchild’s concern grew when he discovered that 16 hour shifts were the norm. Indeed, some children were down the pit for 24, 36 and 48 hours. He also found one who had been underground an entire week. This led to a new legislation in 1872 and the minimum age was to be 12 years old. Also, the new legislation meant that the children could not work more than ten hours a day.

In April 1869, the incentive to unionise came from cuts of up to 33% in the piece rates at Monkwearmouth Colliery. The cuts were acceptable at the time until the men found they could not earn a living wage. Then, in May they went on strike. However, they were prosecuted for breaking their contracts. The union did however negotiate the abolishment of the bond, (the bond set the maximum work hours). Furthermore, by 1910 eight hours plus travelling time became normal.

Sunderland’s economic transformation after 1945 was dramatic. The massive collapse of the industries on which Sunderland depended, undermined the reconstruction effort. Indeed it exposed the structural frailties of the local economy. In 1960, coal mining employed some 18,000 workers in the area, about 20% of the male workforce. However, by 1971, numbers in the coal mining industry in the town had fallen to 12,000. Furthermore, by 1985, this figure was down to 3,550.

The energy crisis of 1973 and the miners strike of 1984-85 brought coal to the political forefront. Ugly and often violent conflict broke out at Wearmouth Colliery gates. By the late 1980’s Wearmouth Colliery was the town’s sole remaining pit, employing 2,000 men. The 20th century brought nationalization and competition from other fuels of course. In 1993, Wearmouth Colliery finally closed for good. 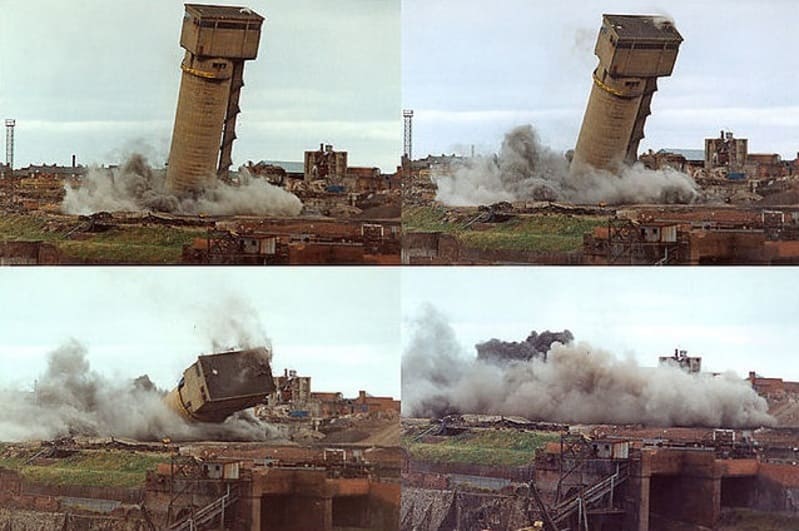 Obviously the local economy suffered for a while until new industry came to the town. The arrival of Nissan to Sunderland in 1984 softened the blow somewhat as coal mining started to shrink. New call centres also helped ease the burden a little too.

Sunderland AFC occupied Roker Park since 1899 and was becoming difficult to maintain for a number of reasons. The closure of the Wearmouth Colliery was a blessing in disguise for Sunderland AFC, of course. The club couldn’t move to their planned site near Nissan after the car plant raised objections. So, the club turned their attention to the site of the old pit.

In short, the football club could not have took possession of a better site if they tried. In recognition to those who worked and died at the pit, the ground took on the name, Stadium of Light.

SAFC also has a pit wheel on their badge. There are also many other coal mining features dotted around the stadium. Indeed, the roundabout leading up to the stadium has a large Davy Lamp and the light is permanently on. 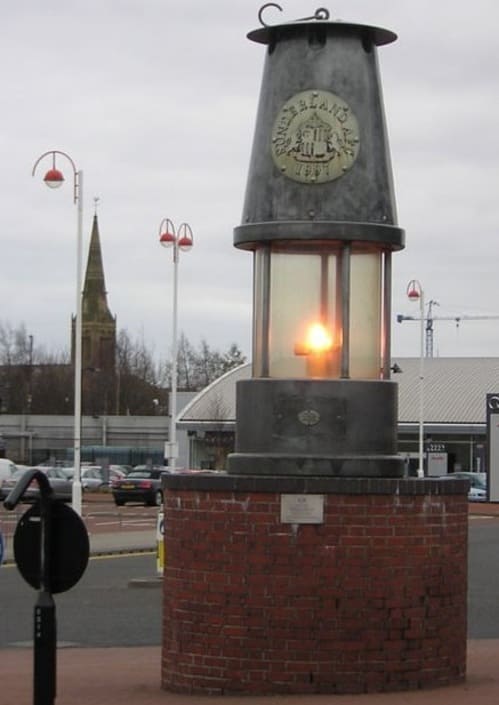 It was local businessman and Sunderland AFC chairman, Bob Murray, who we should thank. This is because Bob ensured that we will forever remember the Sunderland coal mining industry at the stadium. For example, the Davy Lamp is lit constantly to remember those that died in the Wearmouth Colliery.

Wearside Online has information about other pits in the area, see the links below. However, we are always looking to update our articles. So, if you want to supply us with more information, please do so or even create your own blog post here.

Life was tough in the olden days but Wearside Online is proud of our history. So, what are your memories of working in the pits in Sunderland or Wearside in general? Let us know in the comments section below.

However, we also have the massive Sunderland Message Boards (SMB) in which to create a new topic. Our Sunderland Forum is very active and allows for much social interaction with other local people. So, pop over today and see what other facilities that Wearside Online has to offer.

One Response to Sunderland Coal Mining