To begin with, this article is all about Sunderland Deadly Diseases from yesteryear. Indeed, many centuries ago, dealing with diseases and illnesses was in its infancy. In fact, treatments were primitive to say the least.

Sunderland is, of course, at the mouth of the River Wear and is one of the principal waterways in North East England. So, there was a lot of comings and goings. Because of that, the people of the town were always under threat of new illnesses and diseases coming to shore. So, let us look back to the dark days when the Sunderland deadly diseases brought much misery to the town.

In the middle of the 14th century, the people of England could have easily though that the fourth horsemen of the apocalypse was riding by.  This is because the country was suffering from dreadful pestilence which was sweeping through Europe from Central Asia.

The plague arrived on the south coast in the summer of 1348 and spread to London soon after. Then the disease began spreading along the roads, lanes and waterways of England. In fact, the plague spread to all areas of the country by 1349, including Sunderland. There were 3 types of plague, but the 2 common ones were the bubonic plague and pneumonic plague.

Bubonic plague came from rats, but it was the fleas from rats which was to cause the damage. They spread the disease from rats to humans. Its symptoms were purple blotches or buboes which appeared on the victims, putrefied and then burst.

Pneumonic plague, on the other hand, came from airborne bacteria and entered directly into the victims’ lungs. So, you could catch the disease from a sufferer who sneezed if they close to you. The disease was so deadly that death occurred usually in a few days. Estimates from this era suggests that between 20-60 percent of the population died as a result of the deadly disease.

We sometimes refer to the plague as the Black Death, but this was not a popular term until the late 17th century.

Sunderland became notorious as a result of the Asiatic Cholera outbreak which occurred in late 1831. Indeed, Sunderland was the first place in Britain to suffer from this deadly disease. Moreover, the town became an object of much ridicule for the way in which it handled the crisis.

Cholera causes severe diarrhoea and results in dehydration very quickly. Indeed, the results can make the patient suffer from sunken eyes and a lack of elasticity of the skin causing wrinkles. Moreover, the skin can turn bluish and symptoms can occur between 2 hours and a few days.

The disease was spreading across Europe from India and there was an attempt to prevent it coming to the UK. This involved placing ships from Russia and the Baltic into quarantine. However, it appears that this operation failed in Sunderland. As a result, Cholera struck. William Reid Clanny, senior physician of the Sunderland Infirmary, first confirmed that the disease had arrived in the town.

Once confirmed that cholera had come to Sunderland, the authorities enforced the quarantine. This had a negative effect on trade and the locals formed an ‘anti-cholera’ party. Indeed, local doctors became under pressure from this and began denying that Sunderland patients had the disease. This caused a scandal across the country and there was a boycott of Sunderland.

Parliament then passed laws to tighten up on the disease but by then the epidemic was nationwide. The disease died out over time, but not before Cholera claimed the lives of 215 Sunderland folk. However, in Britain as a whole, around 32,000 people died of cholera by 1832. 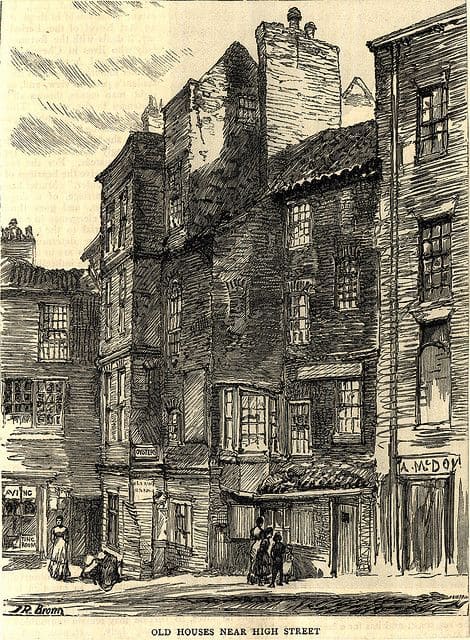 Sunderland was a rapidly expanding town due to the industrial revolution.

However, there was much poverty and people lived in cramped conditions. This obviously had a negative effect on their health.

The well known diarist, Charles Greville wrote about the living conditions of the people in Sunderland.

Indeed, these are his words, ‘The conduct of the people of Sunderland was more suitable to the barbarism of the interior of Africa than to a town in a civilized country’. However much we look at it, the facts are that conditions were serious, but the growth of Sunderland meant that the town was not able to cope at the time.

William Sproat, a keelman who lived near the quayside caught the disease and died a few days later. Indeed, he was the first recorded victim of cholera in Britain.

The second victim of the cholera epidemic of 1831, was Jack Crawford (right), the ‘Hero of Camperdown’.

They buried him in an unmarked “pauper’s” grave after he fell on hard times. However, they later erected a headstone and monument for his heroics. 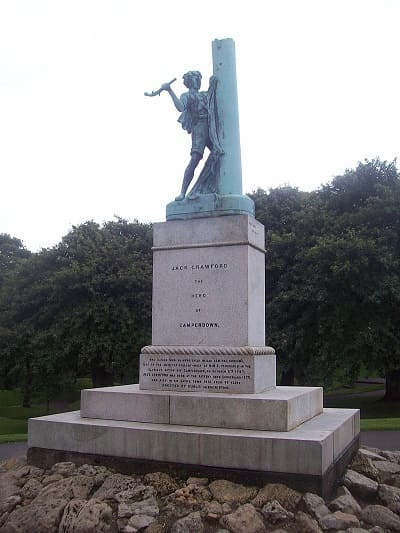 The first person to display the classic symptoms in its extreme form, severe diarrhoea, vomiting and cramp was a 12 year old girl, Isabella Hazard. She became the famous ‘Blue Girl’ and she died on 17th October. 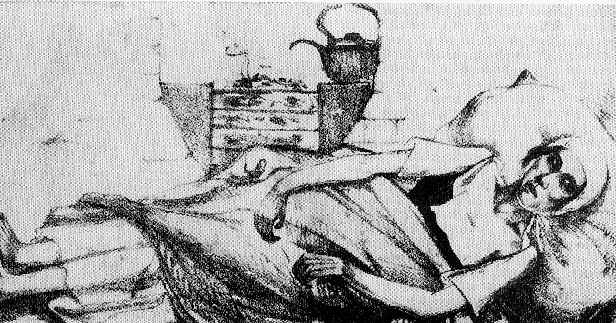 The Blue Girl Of Sunderland

Understandably the problem was most acute in the parish of Sunderland. Indeed, 156 of those who perished were residents of the parish. An area became available in an extension of Bishopwearmouth burial ground on Hind Street, near the infirmary, for the victims.

The construction of a new road in Sunderland City Centre (St Michaels Way) caused authorities to take extreme precautions after finding a cholera burial ground. They did not know whether the cholera disease could be still dormant, so the construction workers wore protective clothing. In the end, they concluded the area was safe.

Surprisingly, the most lethal epidemic to hit Sunderland was flu. A deadly strain of influenza appeared in Sunderland in 1918. Indeed, in less than a week, authorities recorded 8,000 cases of the disease. Moreover, in the following week, the death rate was 91.2 per thousand. This was the highest ever recorded in Sunderland’s history.

That concludes our look into Sunderland Deadly Diseases. Obviously, nowadays the authorities can get to grips with outbreaks a lot more efficiently. But remember, in those dark days, communication and medicine was in its infancy. However, even with our knowledge now, we may still struggle to cope with a new epidemic or pandemic that may come our way.

You may comment on this article ‘Sunderland Deadly Diseases’ using the comments section below. However, you can also open up a thread in the Sunderland Forum too. Our Sunderland Message Boards (SMB) are a great way to socially interact with other local people. So, take a look and see our forums here at Wearside Online.