Firstly, the Sunderland Echo, came about and was first published on the 22nd December 1873. Then, it had the name of Sunderland Daily Echo and Shipping Gazette. However, only 1,000 were published from their Press Lane printing office and had a price tag of a halfpenny.

Indeed, the image shows the first Sunderland Echo that come off the printing press. 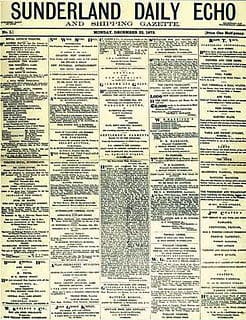 The Shields Gazette, also a liberal paper, sent 3,000 copies of its afternoon edition to Sunderland. But it did not contain much Sunderland news. Tired of this situation, Samuel Storey and his six partners then decided to start their own newspaper. This was to supply local as well as news in general.

To begin with, the Echo’s launch was by a group of men with the simple name of “The Seven”.  Moreover, they were Liberal activists who felt the town needed its own evening newspaper. In essence, the seven men were Samuel Storey, Principal proprietor of the Echo and other newspapers. Also an MP, Edward Backhouse, a Quaker banker, E.T. Gourley, ship-broker and MP, Charles Mark Palmer. Then there was shipbuilder and MP, Richard Ruddock, reporter and editor of the Newcastle Chronicle. Finally, Thomas Glaholm, a rope maker and Thomas Scott Turnbull a draper.

In essence, of the seven, only Richard Ruddock knew anything about newspaper management. Generally speaking, success of the Echo seemed remote as the infant paper struggled to survive. This is because the initial investment was quickly swallowed up. Then as failure loomed, three of the founders stepped down. So, Gourley, Palmer, Ruddock and principal founder, Samuel Storey, took on their shares.

In July 1876 the Echo moved to new premises in Bridge Street, Sunderland. Indeed, it would stay here for the next hundred years. It also had two new presses capable of producing 24,000 copies an hour, but it still hardly made a profit.

Two of the remaining founders died, Edward Backhouse in 1879 and Thomas Scott Turnbull in 1880. Then Samuel Storey became the main proprietor and his family held the reins of power for well over a century.

The Sunderland Echo indeed became the town’s sole newspaper from 1914. Obviously, over the years, the Echo offices became bigger and more modern. During the Second World War, Sunderland came under intense bombing. However, the Sunderland Echo Building suffered no damage. But, due to a national paper shortage in the war, the paper had to change from a large broadsheet to a tabloid format. 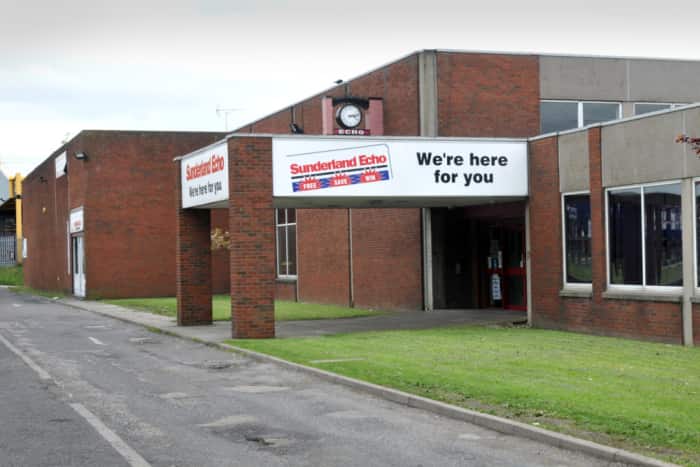 In 1965, further rebuilding work took place with the introduction of a new press. Then, in 1976, the Echo moved to Pennywell Industrial Estate after abandoning the Bridge Street headquarters. Indeed here, traditional method of newspaper production, using molten metal to produce type and printing plates, was becoming redundant.
On the whole, photo composition and web off-set printing was replacing the old machinery.

Rapid expansion was occurring until the company was took over by current owners Johnston Press in July 1999. In fact, the Sunderland Echo is the award winning evening newspaper for Sunderland and East Durham. It serves a population of about 400,000. Currently, the Sunderland Echo publishes two editions a day and a Football Echo** on Saturdays which has a current daily circulation** of around 54,299.

Apart from the internet and social media of course, the physical paper has other competition. Indeed, these are namely, The Northern Echo, The Journal, the Hartlepool Mail and the Evening Chronicle. However, according to independent research in 2000, the Sunderland Echo was holding up well. In fact, research tells us this ‘popularity of the Echo in Sunderland and East Durham is greater than that of all other regional newspapers put together’. Obviously, this reflects the unique community that is Wearside!

Due to the internet revolution, the Sunderland Echo went online like most other companies. This was indeed a massive success. In fact, in January 2007, 80,000 people paid a visit to its website. However, by January 2008, this figure rose to 216,000.

This article obviously pre-dates the beginning of the demise of physical newspapers. Moreover, with new forms of communication, such as the internet, most physical newspapers are struggling to survive. Indeed, most are relying on their respective websites to bolster their readership. Also, in September 2012, the announcement came that the printing operations were to move to Sheffield! Moreover, the Sunderland Football Echo also ceased production in 2013.

Due to this situation, The Sunderland Echo had to abandon the large Pennywell offices and relocate.

So, together with sister papers, the Hartlepool Mail and the Shields Gazette, they now share the same head office. 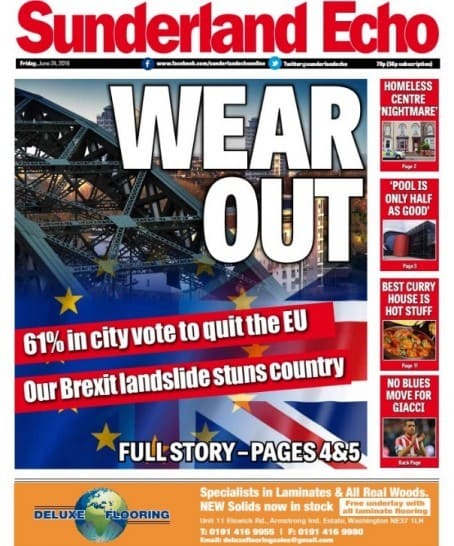 Although the offices are still within the city boundary, the Sunderland Echo is in a fragile position regarding sales. This is because all UK newspaper circulations continue to decline. With this in mind, whether the printing location is sustainable or not is open to debate. Moreover, some people believe one day, all physical newspapers will become a thing of the past. Obviously, they believe that the internet revolution will see to that!

Indeed, the Echo 24 Building now dominates the skyline. Obviously, this stands on the site of the old Sunderland Echo offices in the city centre.