Sunderland Music Scene In The Sixties

To begin with, we have put together some information about the Sunderland music scene in the sixties. Obviously, if there is a connection to Wearside, we will show this. Of course, if you know more about their trips to Sunderland or the Wearside area, let us know in the comments box below. Moreover, if you know of other visits by groups and bands from the sixties, leave a comment or two.

Sunderland Music Scene In The Sixties

Andy Fairweather Low now plays alongside Eric Clapton, although it’s not a new experience for guitarist Andy, who has been with Eric since 1992. Andy joined Eric’s band for their concert tour of Japan in 1997 and contributed to Eric’s 1992 acoustic album Unplugged. Furthermore, among other greats that he has worked with are George Harrison and Van Morrison.

The Animals, Fronted by Eric Burdon, were no strangers to Sunderland of course. In fact, The Animals, formed in 1964 in Newcastle, came to the town many times. The group came about from the remains of the Kansas City Five, a local pop group.

The Animals played a brand of rock similar to the Rolling Stones. Indeed, their House of the Rising Sun single in 1960, went to number one. The Animals underwent numerous personnel changes in the mid-1960s and suffered from poor business management. During 1966 members came and went, and after the departure of Alan Price, the band were soon to finish for good. Other hits were, Don’t Let Me Be Misunderstood and We’ve Gotta Get Out of this Place.

The Beatles appeared at the Sunderland Empire Theatre twice in 1963, of course. Obviously, this most famous of all bands have been a part of our lives for decades.
The album, Sergeant Pepper’s Lonely Hearts Club Band captured a moment in musical history and lifted pop music to a new level of artistic achievement. During their studio years, The Beatles produced what critics consider some of their finest material.
The Beatles are the best-selling band in the history of popular music. Indeed, even after their break-up, their recordings are still in demand. They have had more number one albums on the UK charts and have held the top spot longer than any other musical act. 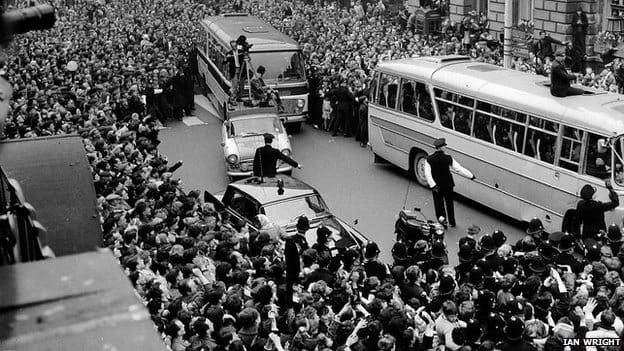 This was indeed, High Street, Sunderland when The Beatles came.

Fleetwood Mac played at the Locarno, Sunderland in May 1969. However, the early Fleetwood Mac which did not have Stevie Nicks and Christine McVie.

At that time Fleetwood Mac was an all male blues band with a guitarist by the name of Peter Green who would hold a legendary status among guitar players the world over. In fact, the same reverence was held in reserve for Jimi Hendrix, Eric Clapton, Jimmy Page, Jeff Beck and Mick Taylor.

Fleetwood Mac sold boatloads of albums in the U.K. and the world over, of course. But the blues years were forgotten by many. Moreover, fans who discovered Fleetwood Mac in the mid 70’s did not even realize that they sprang from blues roots. Oh Well Part 1, became the first single ever to become a number one single all over Europe. Albatross reached the number one spot in the UK in 1969. Four years later, they released it a second time as a single and this time it reached number 2!

Other visiting big names of the time to come to Sunderland were The Fortunes, with their harmonies much in evidence in their three hits of the 60’s.
Emerging as a vocal trio in Birmingham and evolving into a five-piece, they had Roger Cook and Roger Greenaway to thank for many of their bigger successes through to the 70’s.

Caroline was a minor hit but given much greater prominence after pirate ship Radio Caroline adopted it as their own. You’ve Got Your Troubles and Here It Comes Again followed of course. Their 70’s hits included Storm In A Teacup, Here Comes That Rainy Day Feeling Again and Freedom Come Freedom Go.

The Hollies returned to Sunderland on 8th October 1963 . The band were a huge success in the 60’s with 20 chart hits.

In 2010, The Hollies were honoured by the prestigious American Rock ‘n’ Roll Hall of Fame for their impact on the evolution of popular music. The Hollies formed in Manchester in the early 1960s, though most of the band members are from throughout East Lancashire.

We remember this band best for their distinctive vocal harmony style, of course. Indeed, this style ensured they became one of the leading British groups of the 1960s and 1970s. 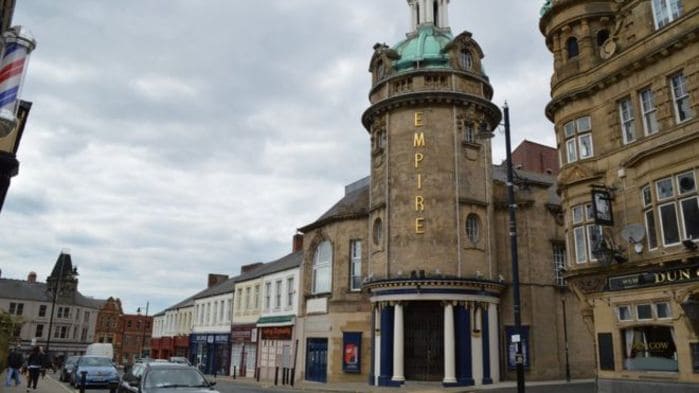 Indeed, The Beatles played at The Empire Theatre, Sunderland

Sunderland Music Scene In The Sixties, Part 2 is here.

3 Responses to Sunderland Music Scene In The Sixties