Twin Resorts Of Roker And Seaburn

By John | 06/05/2012 - 3:33 pm |20/01/2022 Places, What's On
To begin with, just north of Sunderland City Centre are the twin resorts of Roker and Seaburn. The golden sandy beaches are a seaside playground for both adults and children. Closest to the city is Roker and further north is Seaburn. Of course, both resorts have many of the usual seaside attractions.

Both have clean sandy beaches, promenades, amusement parks and arcades. There are also children’s playgrounds, fish and chip shops, gift shops and ice creams parlours too. 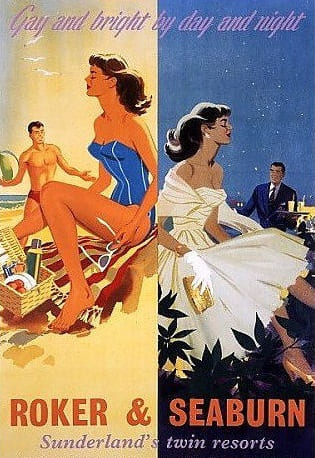 Furthermore, there are many guest houses too. As well as the Marriott Hotel which used to be the Seaburn Hotel, there are many smaller places to stay. For example, there is the Roker Hotel and a host of others on Roker Terrace etc.

In essence, Roker has two beaches. Firstly, there is the wonderful flat beach at the bottom of the Cat and Dog Steps. Then there is another beach on the other side of the Roker Pier. Together with the clean sea water and the odd rock pool, kids really love the beaches in Roker. As a matter of fact, the Cannonball Rocks at Roker beach are a unique feature too. This is because only certain parts of the world can say they have similar rocks in their locality. 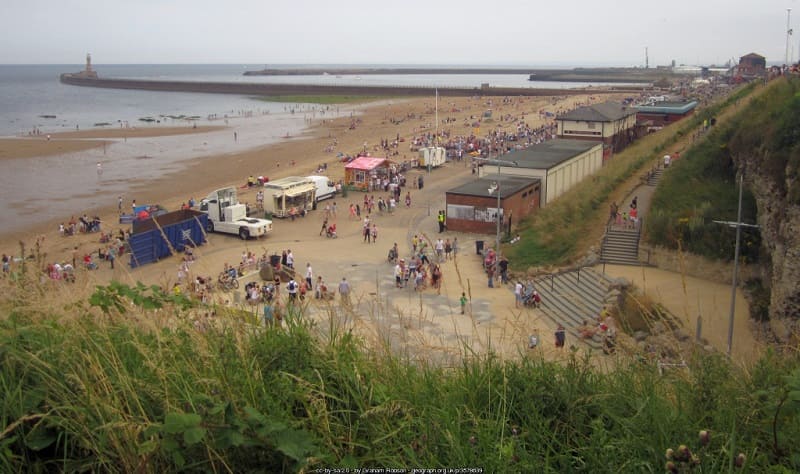 Obviously, in Roker there are some other unique attractions. For example, there is the Roker Pier complete with a lighthouse at the end. Built in Victorian times, its an ideal place for a summer stroll as well as spot of sea fishing. Then there is Roker Park which open to discovery and is great for recreational purposes. You can access Roker Park from both the upper and lower promenades. 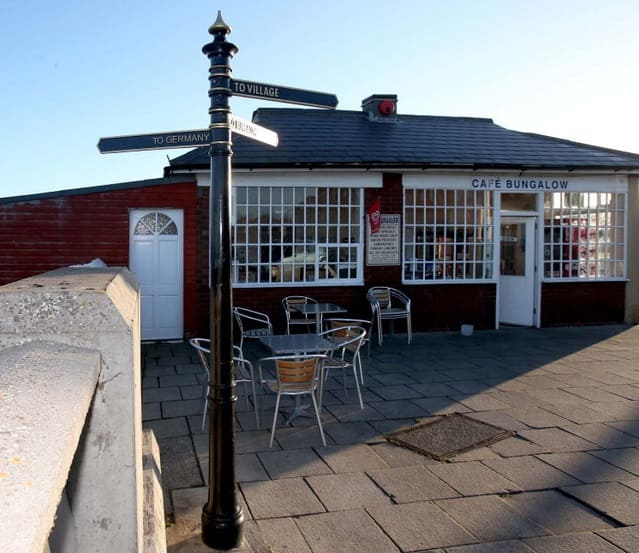 Another landmark in Roker is the Bungalow Cafe on the upper promenade.

Furthermore, outside the cafe is the famous signpost. This of course shows directions to the The Beach, The Village, The Bungalow and curiously, Germany!

Also on the cliff tops is the Bede’s cross which stands in recognition of the works of Venerable Bede. Further along toward Seaburn is the old South Pier which has stood here since 1983.
In addition, at the Roker Watch House is a small museum which is open on Sundays and Bank Holiday Mondays. Of course, on the lower promenade is a small arcade, a pub and a fish and chip shop. Then there are the Cannonball Pods which are kiosks that have a variety of uses. 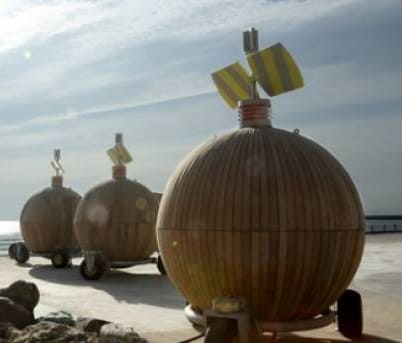 The inspiration and shape for these eco-friendly units come from the nearby Cannonball Rocks.

While Roker has a few more attractions than Seaburn, the beach here is just as good. Although Seaburn has a massive beach, it doesn’t get as busy in comparison with its heydays. Prior to cheap holiday flights abroad, the beach would be very busy. However, many people prefer the relative calm of the vast sandy beaches. In reality, Seaburn beach compares favourably with some of the best beaches in the country. Seaburn funfair has also been through a little redevelopment in the late 1980’s. Indeed, there is now a new amusement park and leisure centre too.

Of course, a new Morrison’s Supermarket ensures a constant stream of people coming to the area. The supermarket also has a petrol station. Moreover, Morrison’s Supermarket entrance displays a huge replica painting of critically acclaimed painter LS Lowry. Of course, this is in acknowledgement of time he would spend and stay in the area. In fact, the road to the side of Morrisons takes the name of the painter – Lowry Road. 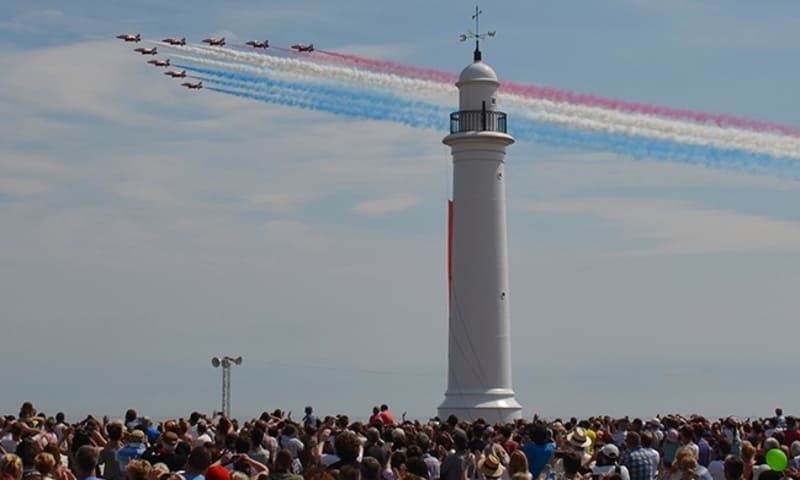 Seaburn also hosts the Sunderland International Airshow, the largest free airshow event held in Europe. The Sunderland Airshow is for people of all ages of course.
With many aeroplanes, helicopters and lots of other activities, the airshow obviously attracts people from all over the UK.

Obviously, the Royal Air Force has their displays on the ground as well as in the air. For example, there are aeroplanes which are accessible and people are able to get close up for pictures. There are also simulators for people to try their hand at flying virtual aircraft. Indeed, around one million visitors come to the area over the Sunderland Airshow weekend. So, get there early on those days as traffic and parking can be a nightmare. 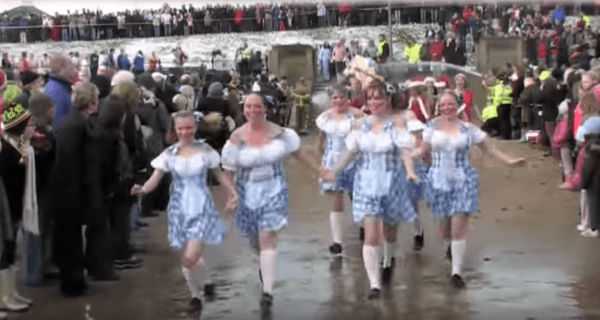 Indeed, hundreds of very brave Wearsiders brave the weather in the name of good causes. Moreover, they are willing to throw themselves into the freezing North Sea at Seaburn on December 26th each year.

Friends and family together with passers-by shout and cheer them on as they faithfully perform their brave deed. Of course, there are cold water hosepipes that can douse and prepare them before they make the plunge. So, no matter what the weather is like, frost, blizzard or icy rain, the brave Wearsiders continue with the tradition.

There are ample parking spaces available near Seaburn, except on special event days of course. However, the area has plenty of bus services and a Metro service too. But the Seaburn Metro station is pretty far away from the beach and is in Fulwell.

To Sum Up Roker And Seaburn

There seems to be something for everyone at Roker and Seaburn whether on holiday or a day out. Indeed, not many towns or cities in the UK can boast of resorts like these. So, don’t forget, Roker and Seaburn is on our doorsteps!