To begin with, The Vaux Family have been in the brewery business since 1806. But Vaux did not establish their own brewery until 1837. Indeed, the first Vaux brewery was on the corner of Matlock Street and Cumberland Street. Moreover the company’s name was after the founder, Cuthbert Vaux (1779-1850). In other words, C. Vaux & Co. The brewery would also become one of Sunderland’s most successful businesses. Thus, it was a major employer in the city for almost 200 years.

By 1844, the company was doing so well they had to expand, which meant they had to move. They then bought a brewery in Union Street, where the business stayed and thrived for the next 30 years. 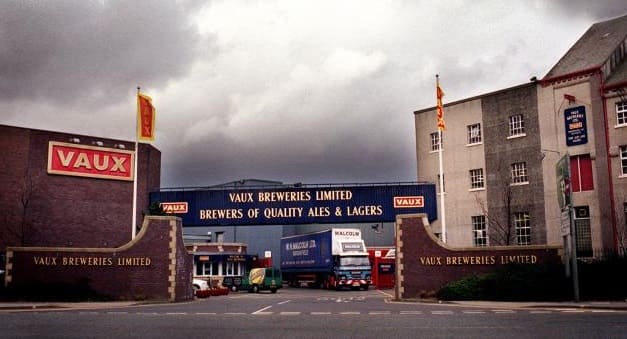 In 1875, North Eastern Railway Company then bought the land for the new Central Railway Station. So, the company moved to Castle Street and Gill Bridge Avenue, where it would remain for the next 124 years.

After Cuthbert’s death in 1878, his sons, John Story Vaux and Colonel Edwin Vaux, eventually took over the business. One of the founders grandsons also called Cuthbert moved away to learn the brewing trade. Then, after his father John’s death, Cuthbert and his brother Ernest joined their uncle Edwin in the company.

When Cuthbert returned to Sunderland and joined the company, there were a few changes. For example, Vaux became one of the first British brewers to introduce bottled ales and stouts.

Frank Nicholson, a Sunderland charted accountant, also joined the company in 1898 as a manager and secretary. He later married Cuthbert Vaux’s sister Amy, and became a director in 1914. Then he became managing director in 1919. In addition, his business abilities saw Vaux expand. For example, in 1927 he arranged an amalgamation with North East Breweries Ltd. Thus, creating the North East’s second largest brewers which became Vaux and Associated Breweries Ltd. Obviously, in 1973 it became Vaux Breweries Ltd.

Furthermore, as part of Vaux’s expansion, they bought a small independent brewery in America. Indeed, it was in 1972 that Vaux took over the Fred Koch Brewery in New York. However, after just three years, they sold off that business. In contrast, by the early 1990’s, Vaux moved into the hotel business.

In 1999, in spite of Vaux Brewery being profitable, the firm’s board decided to close the breweries that they owned. This was because their corporate financier, BT Alex Brown, advised them to do so. Of course, this sent shock waves around Wearside and the North East. At least the firm kept the pubs and hotels side of the business running. But the owners changed the name to Swallow Group plc.

The brewery closure did not have to happen, indeed there was a management buyout package on the table. Despite this, the board went ahead with their original decision which put many locals out of work. Not only that, but the decision was to change Sunderland’s skyline for good. Just to point out that Chairman, Sir Paul Nicholson wasn’t happy with the board and made a decision to resign. In fact, he felt the same way as everyone else in the region.

Of course, in 2000, after 162 years of independence, unfortunately big business took over. However, this acquisition by Whitbread did not help the brewery. In fact, the hotels which Vaux were in control of, had a change of name. Indeed, those became Marriott Hotels. Moreover, the larger Vaux pubs began to rebrand under national names such as Brewers Fayre etc. 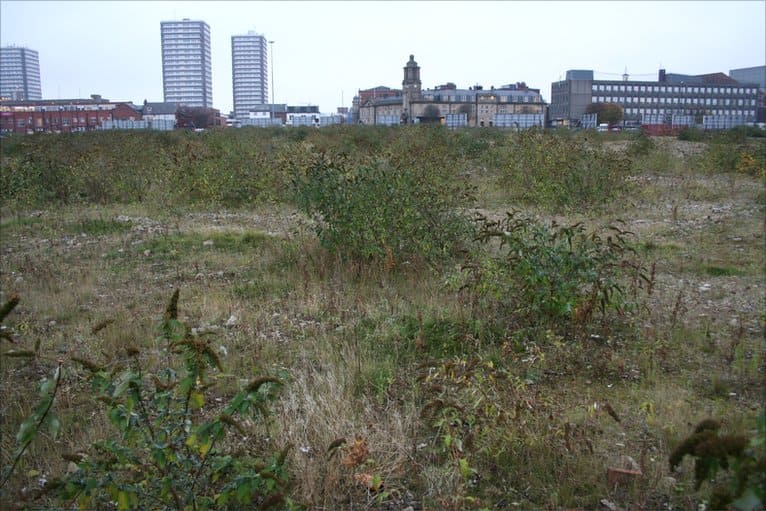 In view of the boards deplorable decision, around 300 people lost their jobs. Furthermore, demolition has taken place and the land is awaiting redevelopment.

In the first place, horses and drays carried the breweries wares to the pubs.

Even after the introduction of trains and lorries, the horses still had an important roll in the company. 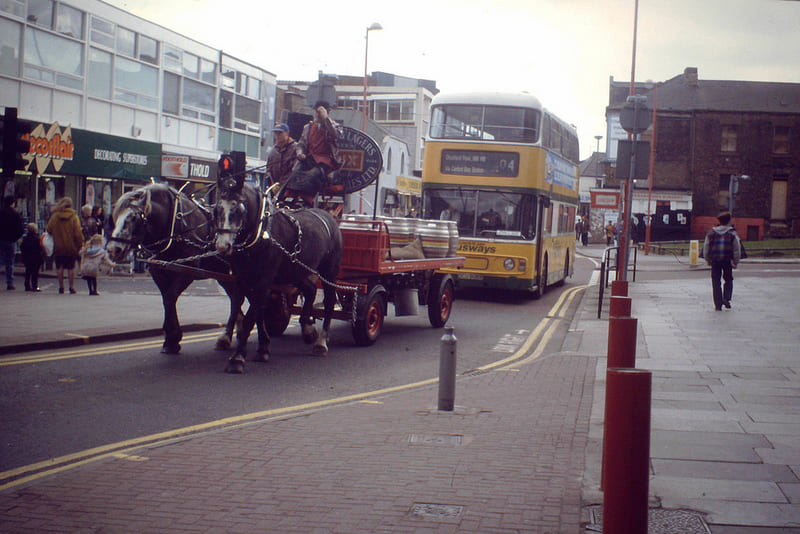 Indeed, they were a colourful and impressive sight on the streets of Sunderland. However, they caused many hold ups in the city centre. In fact, they were not the sort of vehicle to be behind as they were responsible for many tailbacks. But, people didn’t complain as the dray and horses were took for granted. Indeed, the horses continued to transport the breweries wares until the brewery closed.

Obviously, Vaux made many different brands of alcoholic drinks. So here is a comprehensive list of them: 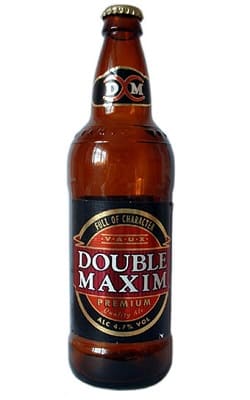 Firstly, Double Maxim was possibly their most famous brand, but there was also a Single Maxim too. Of course there was Samson bitter and Sunderland Draught Bitter. Then there was Vaux Regal, Gold Tankard, Silver Tankard, Bottled Red Label Ale and Golden Ale. Others include, Lambtons, Lorimers Scotch, Norseman Lager, Frisk Lager, Scorpion Lager and How’s Your Father (sold in Summer). Finally there was, Moonlight Mouse, Fighting Hares and Waggledance (a cask conditioned honey ale, sold after Vaux ceased brewing).

Finally, the Vaux sign was a very familiar logo which many pubs proudly displayed above their establishments. Obviously, Vaux pubs were located in many areas of the country too. Of course they were more numerous on Wearside and the North of England. In fact, there was a pub at the side of the brewery itself, aptly named, The Brewery Tap. 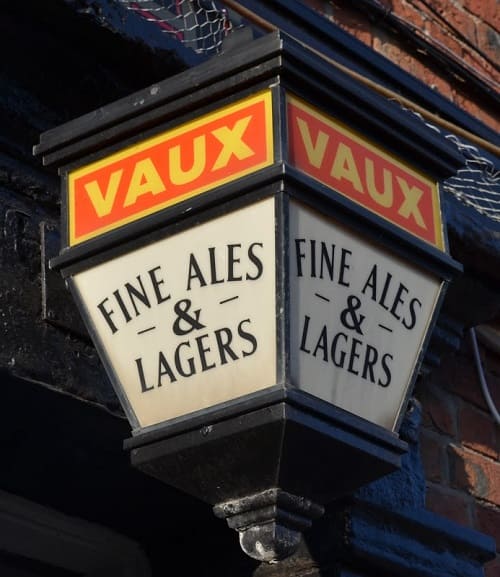 Indeed, we have a comprehensive list of Vaux Brewery pubs here. Obviously, if you know of any others missed off the list, let us know. 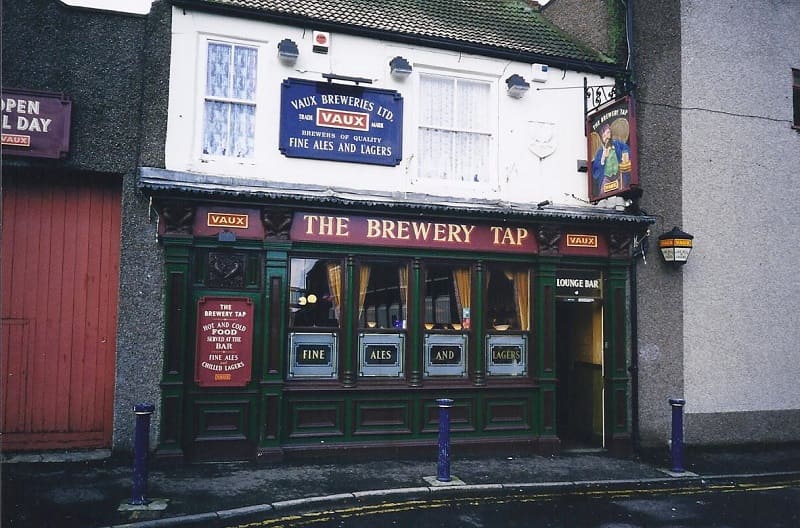